Stations in neutral countries operated covertly, so as not to attract the attention of the Allies.
One such station was based in Sofia, Bulgaria. During WWII Bulgaria followed a pro-Axis policy and declared war on Britain and the United States but did not take part in the fighting.


According to Wilhelm Flicke, who worked for OKW/Chi, an intercept station was set up in Sofia, Bulgaria in January 1940. The station was housed in the former residence of the Communist official Stoitscheff who had fled the country. 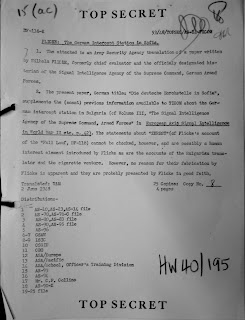 Officially it was designated ‘Seismographic and weather reporting station’ but the local authorities knew its true function and cooperated with the Germans. The cover name of the station was ‘Bohrer’, it had about 25-30 men and head of the station was 1st lieutenant Grotz. Emphasis was given on the interception of radio traffic from Turkey and Malta, as well as stations from Egypt, Sweden, Switzerland and the US Armed forces in the Mediterranean.
The station had a direct teleprinter connection with OKW/Chi and in addition there was a courier plane between Sofia and Berlin.


Even though Bulgarian officials helped in setting up the station this does not mean that the Germans held back from attacking their codes. According to Flicke copies of the Bulgarian codebooks were acquired by the Abwehr (military intelligence) station in Sofia.
As the German position in the Balkans began to unravel in 1944 the Sofia station was closed down. This operation did not run smoothly. The equipment was loaded into two freight cars and the personnel sold their unwanted items. With the money earned they bought 80.000 cigarettes that they expected would be valuable back home. However this ‘treasure’ was lost when the railway car was attacked by partisans and the ammunition stored together with the cigarettes burned up.


Moral of the story, never store tobacco and ammunition together, especially if you’re travelling through the Balkans!