On June 22 1941 the military forces of Nazi Germany attacked the Soviet Union, thus starting the largest land campaign in history.

For a summary of German signal intelligence operations read Compromise of Soviet codes in WWII.
Posted by Christos T. at 11:58 AM No comments:

The KONA units did not have the ability to solve complicated Allied cryptosystems. Instead they focused on exploiting low/mid level ciphers and even in this capacity they were assisted by material sent to them by the central cryptanalytic department in Berlin. This was the German Army High Command’s Inspectorate 7/VI.

The War Diary of Inspectorate 7/VI

Some files of the German army signal intelligence service survived WWII and were retrieved in 1947 from a camp in Glasenbach, Austria, where they had been buried at the end of the war.

The War Diary of Inspectorate 7/VI for the years 1939-45 can be found in the US National Archives, in collection RG457 and in the TICOM collection of the German Foreign Ministry’s Political Archive.

The reports of departments 1, 7, 13 and F occasionally have information on the Enigma cipher machine (both commercial and plugboard versions).

I’ve copied the relevant passages from the War Diary and used google translate. However many terms were not translated correctly so it was up to Frode Weierud, an expert on Enigma history, to correct these passages. 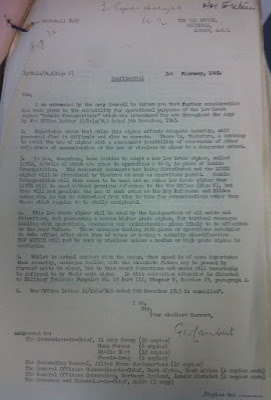 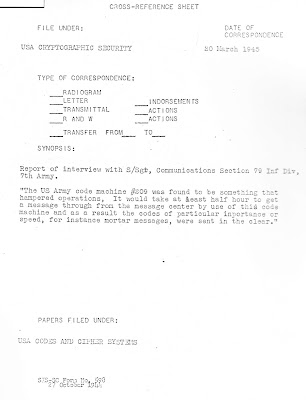 Sources: British national archives WO 193/211 ‘Wireless, cable and signal (including cipher) communications: policy and codes: action from report of Godwin-Austen Committee’, US national archives - collection RG457 - Entry 9032 - box 1.024 - US COMSEC reports.
Posted by Christos T. at 2:15 AM No comments:

With the anniversary of the Allied landings in Normandy coming up, it’s time to read up on some aspects of the battle that have been overlooked by historians: