During WWII the British Armed Forces used several cipher systems for their low/mid level traffic, such as the Syllabic cipher, Slidex, Syko/Rekoh cards, Bomber code etc. Unfortunately it is difficult to find detailed information on these systems and how they were used during the war.

One of these systems was the SYKO hand operated device. This was used widely by the British Army and the RAF (including the planes of Coastal Command).

A detailed description of SYKO is available from Google, as patent US 2270137 A. 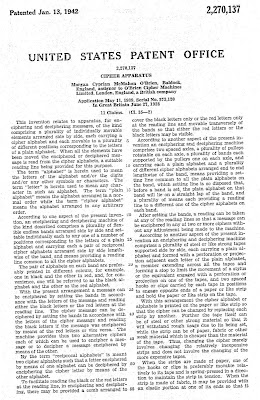 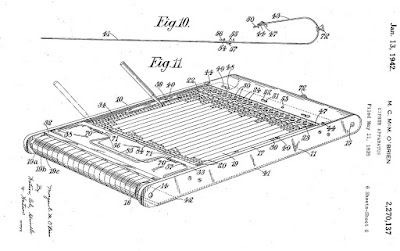 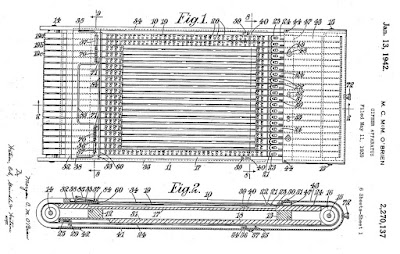 How is NSA breaking so much crypto? is a summary of how the NSA might be able to exploit a large part of encrypted internet traffic and link to scientific paper here.
Posted by Christos T. at 5:54 AM 1 comment:

Comrade Stalin on the T-34 tank

I said previously that I was going to add information in WWII Myths - T-34 Best Tank of the war from a new source. The book ‘Неизвестный T-34’ (Unknown T-34) has information in pages 52-54 on T-34 reliability. Thus I’ve added the following in my T-34 essay:


1). In paragraph Reliability problems:
‘The constant complaints from the front forced the authorities to investigate the problems with T-34 production. In September 1942 a conference was held at the Ural tank factory by the Commissariat of tank industry (12). The conference was headed by Major General Kotin, People’s commissar of the tank industry of the USSR and chief designer of heavy tank ‘Kliment Voroshilov’. In his speech he said:


''Now ... there are a lot of complains about the T-34. You all know the reasons for flaws in the tanks. The first reason –inadequate visibility from the tank; the second reason, and this is the weak link that always accompanies our vehicle in the Army – final drive. And third, the main issue that we have today – insufficient strength of the idler wheel's crank. These issues are the major defects of the T-34 today. Having considered these issues from engineering and technological points of view I would like to discuss another issue, the one that directly resulted solely from our production deficiencies. They are: negligence during production of combat vehicles in the factories, carelessness of assembly and quality control of vehicles. As a result during combat employment our tanks sometimes cannot reach the front lines, or after getting to the territory occupied by the enemy for conducting combat operations, sometimes they are forced to remain on enemy's territory because of some little things... We have to make sure that as a result of this conference all shortcoming will be uncovered and following this conference all corrections in the tank will be implemented in the shortest possible time...
Recently comrade Morozov and I visited comrade Stalin. Comrade Stalin drew our attention to the fact that enemy tanks cover a lot of ground freely, and our machines although are better, but have a disadvantage: after 50 or 80 kilometers march they require repair. What are we talking about? It is because of control gear; also, as comrade Stalin said, because of drive gear, and he compared it with the Pz.III, which is in service with the German army, and which is inferior in armor protection, and in other features, and in crew's layout, and does not have such a fine engine, which the T-34 got, moreover its engine is gasoline, not diesel. But the question аrises – why its drive gear is developed better?

Comrade Stalin gave directives to engineers, to the People's Commissar comrade Zaltsman, to factory's CEOs and ordered them to fix all defects in the shortest time. A special order of the State Defense Committee has been issued on the subject as well as directives of the People's Commissariat of the Tank Industry. Despite all these resolutions have been made by Government and orders of the People's Commissar of the Tank Industry, despite repeated instructions from army units and from Main Directorate of the Armored Forces, which is in charge of combat vehicles operation, nevertheless all of these defects on vehicles are going on... We have to reveal all these flaws, and suggestions have to be made on at this conference how to modify machine component better and faster in order to make the T-34 tank, which is recognized in the army as a good tank, even better fighting machine.''


2). In paragraph T-34 vs PzIII:
‘Its main advantage versus the T-34 was its superior reliability’


I have to thank Boris Kavalerchik for translating General Kotin’s speech.

The OWI telegram from Bern

In Compromise of OWI - Office of War Information communications I had written that:


The book ‘Hitler, the Allies, and the Jews’, p265 says about Mayer:
‘Gerald Mayer was officially OWI’s man in Bern but in fact he was Allen Dulles’s cover and right hand man’


The same book mentions an OWI message from Mayer to Elmer Davis from May 1944, decoded by the German codebreakers. The Germans were not the only ones reading OWI communications from Bern.
Since I was able to track down this telegram that part is changed to:


The book ‘Hitler, the Allies, and the Jews’, p265 says about Mayer:
‘Gerald Mayer was officially OWI’s man in Bern but in fact he was Allen Dulles’s cover and right hand man’

The same book mentions an OWI message from Mayer to Elmer Davis, dated 25 May 1944, decoded by the German codebreakers on June 6. The telegram ‘described the holocaust in Carpatho-Russia and the Mamaros areas of Hungary on the basis of ‘’reliable sources and even on the basis of Hungarian newspapers’’. From the contents of the decode it is clear that it was OWI telegram Bern-Washington No 3.346: 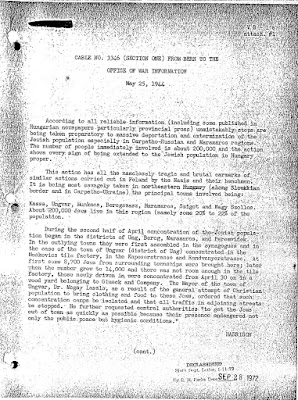 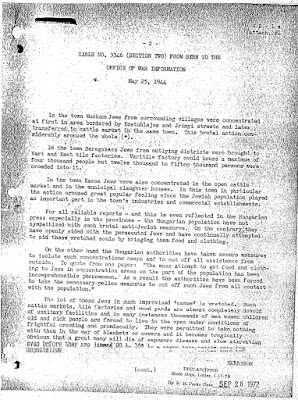 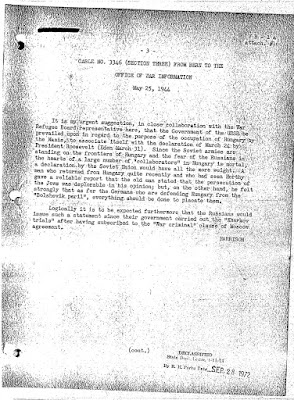 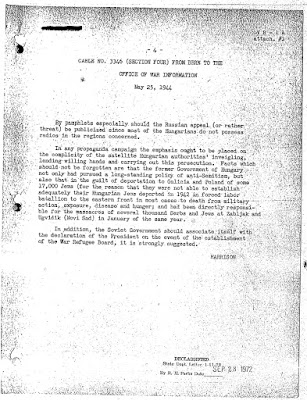 In the course of WWII both the Allies and the Axis powers were able to gain information of great value from reading their enemies secret communications. In Britain the codebreakers of Bletchley Park solved several enemy systems with the most important ones being the German Enigma and Tunny cipher machines and the Italian C-38m.


Although books and films usually like to focus on Alan Turing, there were also other people who made vital contributions towards the solution of the German Enigma device. The mathematician Gordon Welchman worked on German Army and Airforce traffic and became head of Hut 6. Welchman came up with the idea of the diagonal board, a modification of the bombes that made them much more efficient in their operation.
Welchman became assistant director of mechanization at Bletchley Park in 1943, in 1948 immigrated to the US and from 1962 worked as an analyst of the MITRE Corporation.


An amusing incident is described in Welchman’s book The Hut Six Story, pages 190-192. It concerns the problems caused by the Army bureaucracy and the fact that despite their work at Bletchley the codebreakers were liable to be called into military service!
The passage reads:


‘In my own case exemption from military service involved a curious sequence of events. At the beginning of the war, when I became a temporary civil servant in a branch of the British Foreign Office I was thirty-three years old. In due course my age group was called and I received a notice telling me to report to a unit of the Royal Artillery somewhere in the north of England. I took the notice to the Foreign Office administrative people. They assured me that would handle the matter, and that I was to do nothing. A little later I received a polite letter from the Colonel of my artillery unit, saying that there was no doubt a good reason for my nonappearance, but would I please report at once. I took this letter also to the administrative office. Again I was told that the Foreign Office would handle the matter. The next development was a phone call to my mother-in-law, from her brother, Ned, who as chance would have it was Chief Constable of Buckinghamshire, the county in which I was living. He had a warrant for my arrest. This raised an intriguing point. Bletchley Park was enclosed by a high fence and was under military guard. Its cafeteria was open night and day, and sleeping accommodation was available. Suppose I had kept on living and working there and never emerged? I suspect the police might have had some difficulty in arresting me. As it turned out, however, I did not need to resort to any such dramatic delaying action. The Foreign Office and Army Administrators finally resolved the matter. One problem remained. Army regulations included no means of simply letting go of a man who had been called up but had not enlisted. The regular discharge procedure applied only to those who had gone through the enlistment process. It developed that, in order to sever my relationship with the Gunners, I would first have to enlist. I had to report at a Royal Artillery establishment, and it was arranged that I should go to the nearest one, which was a few miles south of Bletchley Park. I was given a gasoline allowance and drove my own car. The "establishment" turned out to be a small office presided over by a sergeant. The sergeant had received detailed instructions, and after filling a few forms, he shook me by the hand, congratulated me on being a Gunner, and said that he would arrange for me to be discharged some other day. When I explained that my office did not want me to take time off for a second trip, he said that he could not discharge me at once because a medical examination was needed and the doctor would be at lunch. I had to get back to Bletchley as soon as possible, so I discovered where the doctor lived, dashed round and just caught him before he went to lunch. A few minutes later I had whatever medical certificates were necessary for my discharge, only to find that the sergeant had gone to lunch. I found him in the nearest pub and persuaded him to come back to his office. After filling out a few more forms, he told me that I was now a civilian again. My length of military service was almost exactly twenty minutes. Then, having arranged my discharge, the sergeant gave me a few appropriate papers, one of which I treasured for many years. It urged me to join the Home Guard, where my experience in the Army would be extremely valuable.’
Posted by Christos T. at 8:33 AM 1 comment:

In WWII Myths - T-34 Best Tank of the war I added the following pics under the paragraph:


‘The transmission had by American standards already failed, although with extreme care it could have been used further. Teeth ends on all gears were battered as the result of clash shifting. Many pieces of gear teeth had been broken off and were in the transmission oil. The failure is due to inadequate design, since excellent steel was used through the transmission.’ 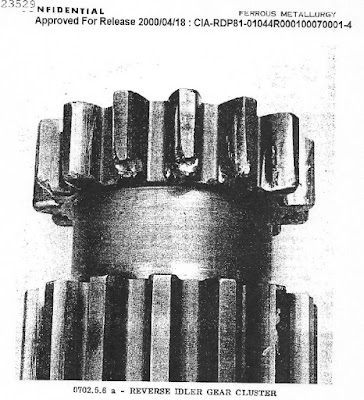 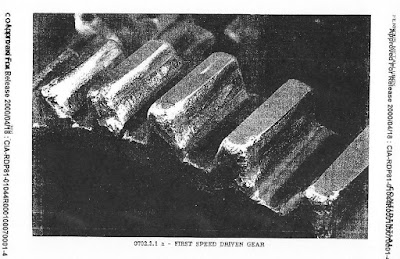 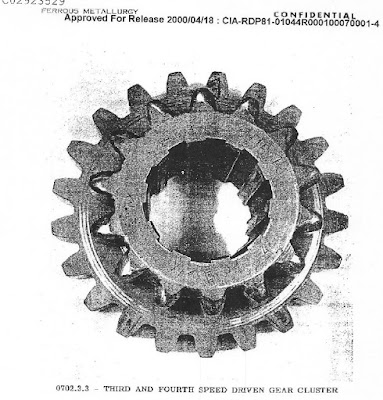 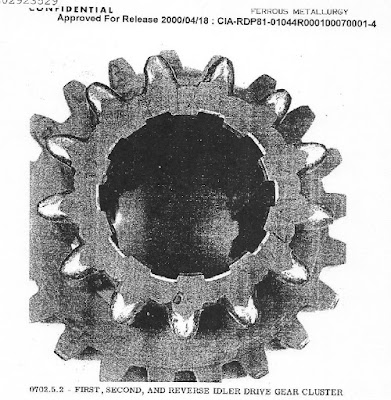 I’m also going to add more information on T-34 reliability from an interesting Russian source. Stay tuned!
Posted by Christos T. at 3:15 AM No comments:

In WWII Myths - T-34 Best Tank of the war I made a correction. I had written that:


‘Still there are examples of T-34’s breaking down during assaults even late in the war (17). For instance the 5th Guards Tank army in 1943 lost as much as 15% of its tanks during its march to Prokhorovka. In August ’43 the 1st Tank army lost 50% of its tanks due to malfunction. As late as the second half of 1944 tank units tried to replace engines with more than 30 hours of operation before a major attack.’
It seems the 15% figure was not correct. The 5th Guards Tank army actually lost 31.5% of its tanks during its march to Prokhorovka. Superior Soviet engineering FTW!
Posted by Christos T. at 7:36 AM 2 comments: