In my  previous post I mentioned the soviet multiplex teletype system and the German Staats intercept facility. Now that I have uncovered a new report mentioning them it’s time to have another look at what I wrote then.

According to the information presented so far there is no doubt that the Germans could intercept the multi-channel traffic.But could they read it ?


It’s important to remember that  Bamford  mentions plaintext.Praun on the other hand said: ‘’ the Russians used the same cryptosystems as in the field for sending important military messages over these circuits’’.I assume he means the standard 2-part codebooks used by armed forces and NKVD.The Army High Command Signal Intelligence Agency had significant success against those systems so the traffic could definitely be read.


Another thing to consider is that the Germans didn’t waste resources on systems they considered to be too hard to break. Taking into consideration all of the above I had to assume that they wouldn’t go through the trouble of intercepting this traffic if they couldn’t actually read it. Therefore i assumed that the Soviet system was not automatically enciphered since that would mean that most/all of that traffic would be secure against the German services.


Regarding the Staats facility I hypothesized that it was the main facility where the multichannel equipment was used by the Army Ordnance Office (mainly based on the information from  Praun).


Now let’s take a look at a report I found and see if it backs me up :


Experiments were already in progress in 1937, with the object of intercepting Baudot and Multiplex traffic. The experiments concentrated on intercepting Russian multi-channel WT teleprinter traffic (of 8 or 15 channels). The traffic intercepted was transmitted in clear and only enciphered technically, i.e. by scrambling  various channels together. With the separation of the channels the traffic was picked up in clear.


In 1938 Wa Pruf 7 organised a lecture for heads of army intercept coys in which developments in this special field were discussed. The equipment shown was very delicate and had-not yet reached its final stage of development. However, progress was so advanced that the army intercept coys were ordered to watch all special traffic they picked up, to record it on magnetophones and to forward the results to Wa Pruf 7 for analysis. In order to assist the army intercept coys in recognising special transmissions, acoustic tone films were issued. From that time onwards Wa Pruf 7 became very secretive and although it received traffic from the army intercept coys, it never reported what progress had been achieved. PW knows, however, that considerable successes were achieved during the war, especially against RUSSIA, and that before the war the Baudot link PARIS/MOSCOW had been satisfactorily, intercepted. PW has the impression that the work at STAATS was highly successful because in 1941, despite the manpower shortage, the establishment was increased.
Interesting isn’t it ?

So it seems that the multichannel radio teletype traffic was indeed plaintext and it’s security rested on the splitting of the channels.During the war I assume the Soviets used it to send both plaintext and encoded messages.However once the Germans mastered the interception technique and built the fish machine it must have provided them with  huge amounts of sensitive traffic.


So far I had to make a lot of assumptions but it seems I am in the right . 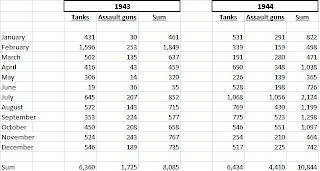 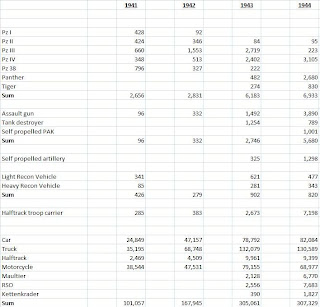 Tanks: special tanks (flamethrowers and command panzers) are not included.
Assault gun : Stug III and IV
Tank destroyers : Ferdinand,Nashorn,Hornisse , Jagdpanzer IV,V,38
Self propelled artillery: Wespe,Hummel,Grille,Sturmhaubitze.
Some comments:
In '41 and '42 losses are low ,despite having to fight against tanks with superior paper characteristics like the T-34.
In '43 and '44 losses go way up but with a twist.Tank losses rise in '44 but Stug and Tank destroyer/artillery losses explode.
In all cases production can cover the losses.The only exception is tank losses in '43,although it could be that tanks destroyed or heavily damaged in late '42 are written off in the '43 tables(Stalingrad disaster).
Posted by Christos T. at 7:13 AM No comments:

This has been on the news the last couple of days:
http://www-03.ibm.com/press/us/en/pressrelease/35251.wss
Today, IBM researchers unveiled a new generation of experimental computer chips designed to emulate the brain’s abilities for perception, action and cognition. The technology could yield many orders of magnitude less power consumption and space than used in today’s computers.
To do this, IBM is combining principles from nanoscience, neuroscience and supercomputing as part of a multi-year cognitive computing initiative. The company and its university collaborators also announced they have been awarded approximately $21 million in new funding from the Defense Advanced Research Projects Agency (DARPA) for Phase 2 of the Systems of Neuromorphic Adaptive Plastic Scalable Electronics (SyNAPSE) project.
This is a major initiative to move beyond the von Neumann paradigm that has been ruling computer architecture for more than half a century,” said Dharmendra Modha, project leader for IBM Research.
It’s obviously quite a paradigm shift in computer technology but haven’t I seen something similar somewhere ? Oh right…
Body of secrets: anatomy of the ultra-secret National Security Agency , p613
Eventually NSA may secretly achieve the ultimate in quickness, Compatibility, and efficiency—a computer with petaflop and higher speeds shrunk into a container about a liter in size, and powered by only about ten watts of power: the human brain.
Mission accomplished?
Posted by Christos T. at 12:56 AM No comments:

Most histories mention the Italian military in derogatory terms .They didn’t have modern equipment,they lost a lot of battles,their officers did not perform adequately  etc

This is an example of the Italians saving the Germans for a change…
From ‘’Intelligence and strategy: selected essays’’,p181
Speed, flexibility, reliability and security are the characteristics required of any signal system. Without these it cannot provide the means whereby immediate and accurate information is supplied to commanders and timely and effective execution of operational and administrative plans can follow. These characteristics are of especial importance under desert conditions where distances are great and dispersion considerable, where there are constant and rapid changes in the situation and where units and formations move frequently from one command to another.
The following examples of the misuse of routine may serve as a guide to [the] proper use [of radio-telephones]:
a) In June 1942 an Italian Second Lieutenant in a radio intercept company was awarded the German Gold Cross for “Saving the 15th Panzer Division in the Western Desert near Bir Hachem.” The 15th Panzer Division was cut off from its supply trains and was almost out of fuel and ammunition. The Italian intercepted a conversation in the clear between two British commanders concerning their intended actions in disposing of the unfortunate German division. This information enabled the German commander to collect and fuel a few of his tanks and break through the encircling British forces to reach his supply trains, and so to extricate his whole division.
So it seems the Italians weren’t always a burden for the Germans.
Posted by Christos T. at 12:13 AM 2 comments: 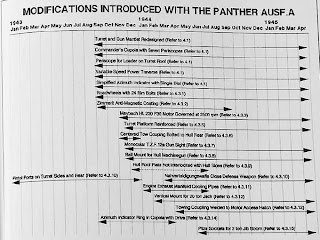 Although in it's first year of service it suffered from mechanical problems it should be kept in mind that it had to operate in the unforgiving environment of the Eastern front ,with mud damaging vehicles of all kinds.From '44 operational rates are very close to the Pz IV and Tiger.Lack of spare parts should also be investigated when looking into the serviceability of vehicles
Posted by Christos T. at 3:37 AM 6 comments: