Another interesting event during WWII was the interception by the Germans of Soviet radio facsimile traffic. Apparently the SU had a large number of these radio stations and important documents were sent this way.

The agencies that intercepted this traffic were: 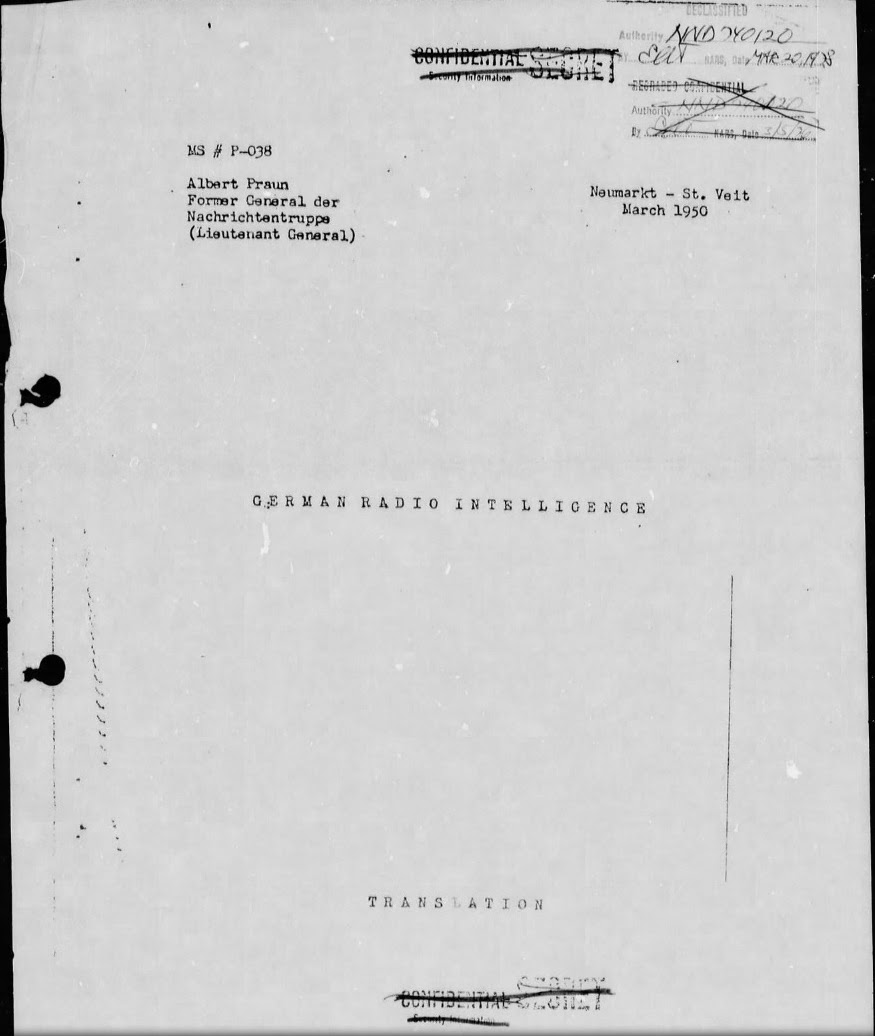 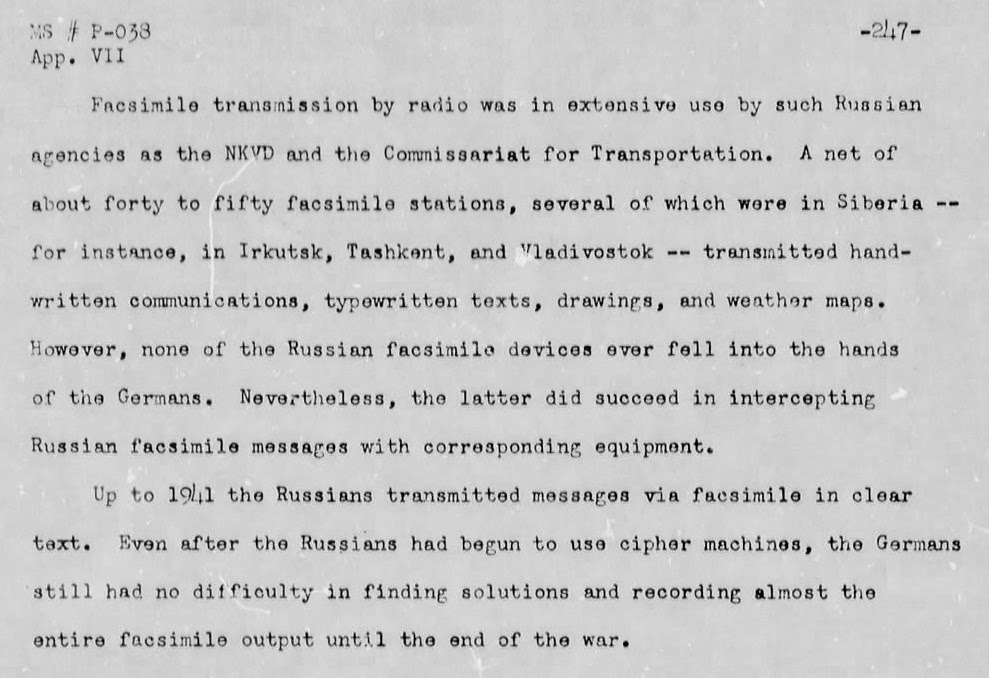 Facsimile transmission by radio was in extensive use by such Russian agencies as the NKVD and the Commissariat for Transportation. A net of about forty to fifty facsimile stations, several of which were in Siberia -- for instance, in Irkutsk, Tashkent, and Vladivostok -- transmitted hand-written communications, typewritten texts, drawings, and weather maps. However, none of the Russian facsimile devices over fell into the hands of the Germans. Nevertheless, the latter did succeed in intercepting Russian facsimile messages with corresponding equipment. Up to 1941 the Russians transmitted messages via facsimile in clear text. Even after the Russians had begun to use cipher machines, the Germans still had no difficulty in finding solutions and recording almost the entire facsimile output until the end of the war.


69. This referred to the transmission of photographic messages by wireless means. Such traffic was picked up from all over the world, including lines from Moscow to Stockholm; London to Moscow; London to Cairo; New York and Moscow etc. Non-Russian channels did not yield any valuable intelligence as the photos intercepted were normally only of news agency interest. Internal Russian traffic of this nature did ,however, yield technical diagrams and charts which were communicated by wireless methods.
70. Y traffic was picked up in Ref 1c of Gruppe VI. The activity was discontinued in Jan ’45.

The Abwehr’s assessment of Russian women

If you read the title and expect this post to be critical of the conduct and morals of Russian women, during WWII, you will be disappointed. So read on!

The Luftwaffe was supposed to be a ‘tactical’  airforce .As such it was very good at supporting the German army but could not have a ‘strategic’ effect on operations. If only the Germans had invested in 4-engine bombers they would have won the Battle of Britain ,they would have bombed the Russian factories and won the war easily... At least that’s what I’ve read in books and articles.


Do I agree ? No
In order to decide if the LW was a ‘tactical’ airforce we need to have a look at:
1.     Production of LW aircraft in numbers
2.     Production of LW aircraft in weight
3.     Composition of LW fleet
4.     Comparison with RAF’s Bomber Command
Let’s look at production. Here there is a problem regarding the way we count aircraft. A large number of ‘’fighters’’ were Ju-88 bombers used as night-fighters. The Bf -109 and the Ju-88 were also used as recon planes. So here I’ve added to the wikipedia bomber data the Ju-88 nighfighter and recon plane. Also did the same for the Bf-109 in the fighter table. The end result is :

Looking only at the number it’s obvious that bomber production dominates the other parts of the LW fleet. Even in 1943 when the percentage goes down to roughly one third if we take into account the cost of bomber planes vs fighters ( 2 engines vs 1 , larger and heavier etc) again the bombers are the no1 item.


A better way is to look at the weight of produced aircraft. Since bombers are larger and heavier it is a better indicator of the relative value of  LW production. I’ve used the same data as before but this time I multiply each type of aircraft with its standard weight (in kg,from Wikipedia). It may not be the most scientific way but it’s close enough:

Now let’s have a look at the composition of the LW fleet throughout the war:

The Bomber force makes up ~41% of combat strength in 1941-44. So it is undoubtedly the largest part of the LW.
So the LW was definitely not an airforce that spent the majority of its resources on fighters and ground attack aircraft. Instead it was the Bomber force that ate up most resources.
Now let’s compare with a ‘strategic’ force, the RAF’s Bomber Command.

What the numbers tell us is obvious. During the period 1939-42 BC has few bombers and only a small part are 4-engine. The majority of its aircraft are comparable or inferior to the standard German types.
So at least for the first half of the war no airforce operating in Europe can be said to be ‘strategic’.
Conclusion: Throughout the war the Kampfgeschwader accounted for the largest part of the LW. For the first half of the war no other nation had as many bombers available. Only in 1944 is the Bomber Force reduced in order to shift resources and pilots to the fighter defenses. Even then a large (for German standards) 4-engine He-177 bomber force is built up.
Compared to the ‘strategic’ Bomber Command the LW had a substantial numerical advantage in the period 1939-42 and bombers with similar or superior capability. Only in 1943-45 do the Brits have sufficient numbers of heavy bombers to classify as a ‘strategic’ force.

Taking into account the information presented so far it is clear that the Luftwaffe was not a tactical airforce in the period 1939-43. Only in ’44-’45 does the Bomber Force become eclipsed by the fighters and ground attack aircraft.