Progress of my FOIA cases

So far in 2017 my following NSA FOIA cases have been processed:

2). Request for any postwar interrogation reports on Georg Schroeder, head of the Forschungsamt’s cryptanalysis department:

I received a reference to files transferred to NARA in 2016. The NARA research department checked the reference and they could not locate any file on Schroeder.

The report was uploaded to the NSA website in 2017.

I copied the first one from NARA. The second has also been sent to NARA but the reference points to 36 boxes that have not been indexed, so the file could not be located by my researcher.

I requested this file in 2015 and now it has been placed in the review queue.

DF-196 has been placed in the review queue. TICOM document 2765 cannot be located.

However pages 31-37 of that report are available as TICOM DF-94 ‘The development of Russian cryptographic systems’.

The files seem to have been transferred to NARA in 2017 but they have not been processed yet so they cannot look for the E-Bericht reports in those boxes.

The NSA FOIA office gave me a reference which the NARA research department checked without success.

I copied I-26 and I-116 from NARA. I received the rest from the NSA FOIA office.

It is still in the review queue.


Overall it’s been a very good year so far as I’ve received a lot of material. Let’s hope the rest of the reports are released soon.
Posted by Christos T. at 12:37 AM No comments: 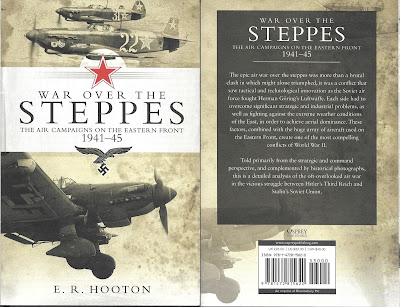 
I consider this book to be on the same level as ‘Stopped at Stalingrad: The Luftwaffe and Hitler's Defeat in the East, 1942-1943’, meaning it is essential reading for anyone interested in military aviation history.
Posted by Christos T. at 9:02 AM 6 comments: 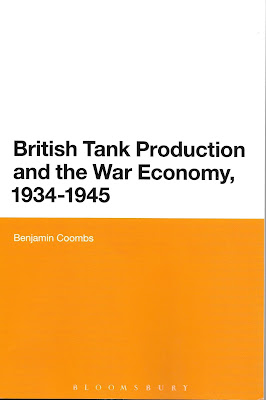 
For me the value of the book is that it helps explain German victories in N.Africa in 1941-42. The Germans benefited by fighting against an opponent whose tanks constantly broke down. In the period 1943-45 the British tanks became more reliable because a determined effort was made to thoroughly check and fix flaws and a high priority was assigned to spare parts production.
Posted by Christos T. at 12:05 PM 1 comment:

Waiting for the Carlson-Goldsberry report...

I have one more essay that I’m going to upload and it covers, in some detail, the compromise of State Department communications in WWII.

Ideally I would like to get a copy of the Carlson-Goldsberry report from the NSA’s FOIA office but if that doesn’t happen soon I’ll just go ahead and post it anyway. If I need to update it I’ll do so in 2018.

Let’s hope I get lucky and the file is released soon.
Posted by Christos T. at 2:52 AM No comments:

After the Allied victory in WWI, the leaders of the US, UK and France imposed harsh peace terms on the defeated Germans. Germany (and the other defeated Central Powers) had to make reparations to the Allied countries.

The problem was that the payments that the German government was supposed to make were so great that they would bankrupt the country. Due to German unwillingness and inability to service the payments the Allies resorted to military measures such as the occupation in 1923 of the Ruhr industrial area.

In order to defuse the situation and find a realistic solution to the reparations problem the Dawes Plan was implemented. Allied troops would leave the Ruhr area and the German government would resume payments, after receiving a US loan that would revitalize the German economy.

In Germany the Allied representative responsible for monitoring the German compliance with the Dawes plan was mr Seymour Parker Gilbert and his official title was Agent General for Reparations by the Allied Reparations Commission.

It seems that the German government closely monitored Gilbert’s communications and was able to solve some of his encrypted traffic to New York (Federal Reserve bank), Paris and Rome.

Documents of the German Foreign Ministry’s decryption department Pers Z, captured at the end of WWII, show that his messages were solved by the German codebreakers: 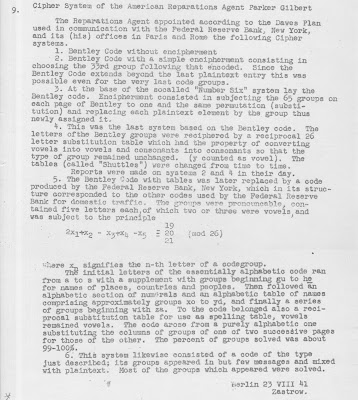 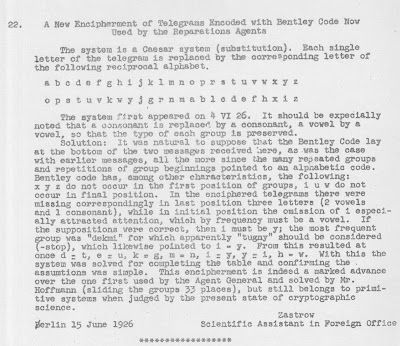 
Additional information: Gilbert’s 1927 report.
Posted by Christos T. at 3:09 AM No comments: