During WWII all the participants had some success in intercepting and decoding the radio traffic of enemy military units. Another type of traffic that proved to be very important for military operations was the traffic of the railways organization. By monitoring the movement of troops and supplies it was possible to identify the buildup of troops at specific areas of the front and thus anticipate enemy movements.


The codebreakers of Bletchley Park attacked the traffic of the German Railways - Deutsche Reichsbahn and started solving messages of the Eastern European network in 1941. Through this traffic they were able to monitor the movement of men and supplies to the East.
The German Army’s codebreakers were able to solve the code used by the NKVD railway troops and thus they also got information on the movement of supplies and the concentration of forces in specific areas of the front.


I’ve mentioned in my piece on German intelligence on operation Overlord that the Germans were able to solve the code used by railway troops in Britain in late 1943.
According to ‘Delusions of intelligence’, p46:


‘This same Heer station had broken into the British railroads codes by late November 1943 and claimed a 98 percent success rate in reading the two thousand plus signals produced by twenty-six keys in December 1943. Although not considered vital in peacetime, such intelligence on Britain proved important by providing information on the movement of troops and supplies.’
Obviously the solution of this traffic could have compromised the security of operation ‘Overlord’. More details on this system are available from the war diary of Inspectorate 7/VI and the reports of NAAS 5 (Nachrichten Aufklärung Auswertestelle - Signal Intelligence Evaluation Center). This was the cryptanalytic centre of KONA 5 - Signals Regiment 5, covering Western Europe.


The war diary of Inspectorate 7/VI shows that the radio traffic of the railways was first investigated in late August 1943 and in September a report was issued giving some information on these networks. There were two main networks, The one from South London, covered the territory of the Southern Railway (SR) and the Great Western Railway (GWR), the one in North London covered the area of ​​the London, Midland & Scottish Railway (LMSR) and the London & North Eastern Railway (LNER). Most of the traffic was from the first network and a few of the station callsigns were identified (Ashford, Tunbridge Wells, Chatham, London, Horsham). Some of the reports dealt with ‘coal positions’, ‘crippled wagons’, the removal of ‘rubble’ and cement shipments. 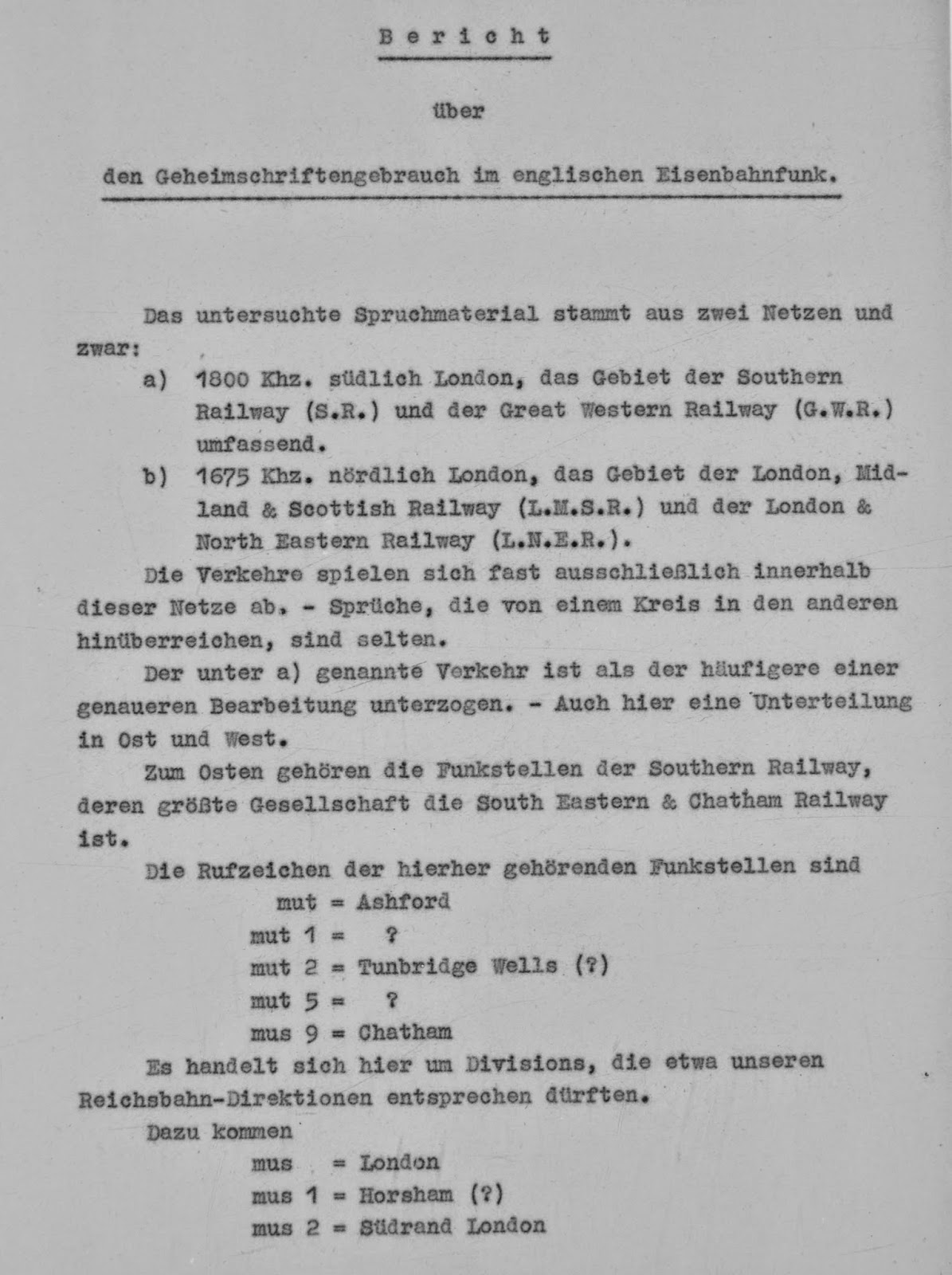 Investigations continued in October and in November they succeeded in solving the cipher used for station names. This was a paired Caesar, meaning the well known Playfair cipher. The square was changed each day and during the month 12 keys were solved. The results were communicated to NAAS 5 so that they could take over the solution of this traffic (called ECr27 in the reports).

In December ’43 a list of the frequent abbreviations and aliases appearing on the ECr27 was prepared and sent to NAAS 5.

The reports of NAAS 5, E-Bericht 1/44 and E-Bericht 2/44 state that the code used by the radio network of the railways (Engl. Eisenbahnfunknetz) was solved almost completely in December 1943 and January 1944. 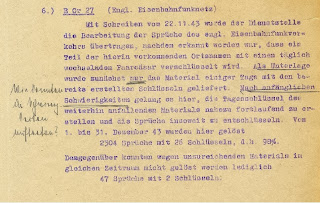 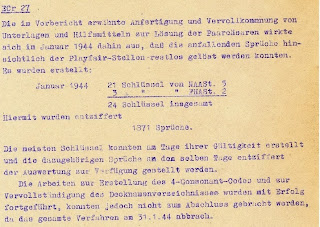 However in February ’44 the code was changed and from 16 February no such traffic was intercepted.

The solution of this traffic in the period that the Anglo-Americans were preparing the invasion of Western Europe may have given the Germans clues about the concentration of forces in the Southern areas of the UK.