The NSA’s FOIA office has released the TICOM report DF-229 ‘Three reports on the work of OKW/Chi’.

The three reports in question are ‘The Cryptologic agency (Chiffrierabteilung) in OKW’, ‘Memorandum on the secret diplomacy of 1944/45’, ‘France and the world 1944/1945’.

In the period 1936-45 the German signal intelligence agencies were able to intercept radio traffic from the interior of the Soviet Union (both Morse and radio teletype).

The information was included in their reports analyzing the Soviet economy. 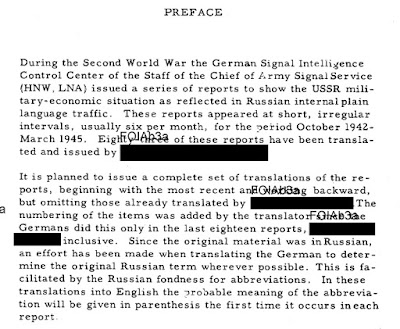 Some of these reports are available from the CIA’s FOIA website, for example:


I downloaded as many of the reports that I could find and I’ve joined them into one pdf file (1.689 pages):

Putin/Grizzly Bear hacked the US elections!!!

Email ThisBlogThis!Share to TwitterShare to FacebookShare to Pinterest
Labels: MAGA

What cases am I going to cover this year?

Although I’ve written essays about the most interesting cases of cryptologic history, there are a few cases that I have not been able to cover in detail.

Unfortunately in order to write about them I need access to material from the NSA’s FOIA office or from the US and German archives.

If all goes well and I receive this material then I will be able to write about the following cases:

The Air Ministry’s Research Department - Reichsluftfahrtministerium Forschungsamt was one of the major intelligence organizations of Nazi Germany.

It was created by Hermann Goering as his personal intelligence agency in 1933 and during the period 1933-45 the Forschungsamt monitored telegram, mail and telephone traffic in Germany and also intercepted and decoded foreign radio traffic.

Unfortunately we do not know many details about their wartime work. ‘European Axis signals intelligence vol 1 - Synopsis’, p21-2 says that no evidence of their cryptanalytic successes was found and that less than 1% of the FA’s personnel were interrogated.

Much later, in the early 1950’s, two TICOM reports on the Forschungsamt were written by former members drs Kröger, Huppertsberg and Kurtzbach.

TICOM reports DF-240 and DF-241 should have interesting information. If the NSA’s FOIA releases them I’ll be able to write a detailed report on the operations of the Forschungsamt.

In order to protect its diplomatic communications Japan’s Foreign Ministry used several cryptologic systems during WWII. In 1939 the PURPLE cipher machine was introduced for the most important embassies, however not all stations had this equipment so hand systems continued to play an important role in the prewar period and during the war.

One of the main hand systems was the J-19 code, enciphered either with bigram substitution tables or with transposition using a stencil.

Both the Anglo-Americans and the Germans solved the J-19 FUJI code in the period 1941-43. In summer ’43 FUJI was replaced by three new systems. The transposed codes TOKI and GEAM and the enciphered code ‘Cypher Book No1’.

TOKI was used in the period 1943-45 and it was similar to J-19 in that it was a code transposed on a stencil. Just like its predecessor it was solved by the Anglo-Americans and the German codebreakers. The US designation was JBA and the designation in Pers Z files (decryption department of the German Foreign Ministry) was JB-64.

If all goes well and I receive the relevant material I will write an essay on TOKI.

I’m also waiting for some files from NARA. If I receive them then they should contain a lot of new information.

I’ve already written about this case in German codebreakers vs Enigma but this time I will write a more detailed essay using the information contained in the war diary of Inspectorate 7/VI.

I’ve given a summary of German work on the Swiss diplomatic Enigma cipher machine in German codebreakers vs Enigma but this time I decided to investigate further so I’ve copied more material from the archives.

Unfortunately that wasn’t enough and in order to write about this case I will have to wait till the NSA’s FOIA office releases the relevant files (TICOM reports I-31, DF-240, DF-241).


If the NSA’s FOIA office releases more TICOM reports and if they contain new information on the compromise of the State Department’s M-138-A cipher then it might be possible to write more about this very interesting case.
Posted by Christos T. at 12:51 AM 2 comments:

In January 2016 I wrote a summary of the progress I had made in researching some very interesting cases of cryptologic history.

What is the state of these cases a year later? Let’s see.

This case has been (by far) the most difficult of those I’ve had to research. Despite this I was able to make real progress in 2015. I located the report ‘JAT write up - selections from JMA traffic' and used it to write an essay on the material transmitted from Germany and Finland to Japan, I received the report  I-89 ‘Report by Prof Dr. H Rohrbach of Pers Z S on American strip cipher’ and wrote Compromise of the State Department’s M-138-A strip cipher and the traffic of other US agencies.

Also during the year I managed to find a lot of material on the Finnish codebreakers and their work on the M-138-A strip cipher. Regarding the Carlson-Goldsberry report the NSA’s FOIA office has managed to locate it but releasing it will take time.

In 2016 I was able to find more information on how the M-138-A cipher system was used by the State Department and I presented this information in New developments in the strip cipher case. I also added dr Huttenhain’s statements on the solution of the M-138-A cipher, from his unpublished manuscript ‘Einzeldarstellungen aus dem Gebiet der Kryptologie’.

Unfortunately the TICOM report DF-15 ‘Reports of group A’, that I expected would have details on the solution of the M-138-A cipher by the codebreakers of the German Foreign Ministry, simply says in page 5:

SV: In the summer of 1941 A-Group received through OKW a photographic copy of the Instructions for Use and 4 series of strips by means of which a number of messages could be deciphered.

Regarding the Carlson-Goldsberry report the NSA’s FOIA office still hasn’t declassified it.

As far as I know no new information is available on the wartime operations and successes of the Soviet codebreakers.

After locating the reports of Referat 12 i was able to write the detailed essay Allied agents codes and Referat 12. I’ve also requested the postwar interrogation reports of Dr Wilhelm Vauck from the NSA. However locating and declassifying them will take some time.

The NSA’s FOIA office has stated this year that ‘a thorough search of our historical files was conducted but no records responsive to your request were located’.

Thus it seems that dr Vauck was not interrogated by the Anglo-Americans at the end of WWII.

According to the NSA’s FOIA office my case concerning the release of reports DF-240 and DF-241 is in the final review queue.

The reports of the German Army’s codebreakers on the Enigma are available from government archives in the US and Germany. Unfortunately no one has read and commented on them.

The Inspectorate 7/VI reports are in the US National Archives and Records Administration, collection RG 457 - entry 9032 - boxes 1405-1409. I don’t have the means to check these boxes for the Enigma reports (plus they’re in German).

However I do have the Inspectorate 7/VI war diary and I’ve copied the passages dealing with research on the security of the Enigma cipher machine. As soon as I get some accurate translations I’ll post the text.

I haven’t seen any new information on the possible solution of these cipher machines by the German codebreakers.

I haven’t seen anything new on the possible solution of the Soviet diplomatic code by the Germans.


‘I have to say I’m still surprised that this device has not received any attention from historians and/or the media!’
Posted by Christos T. at 10:54 PM 1 comment: