One of the most important questions regarding the war in North Africa, during WWII, is what effect did the sinking of Axis convoys have on the overall campaign.


Can Rommel’s defeat be attributed to his lost supplies? Or were the losses tolerable?
It is an important question not only in the context of military operations but also because the intelligence that allowed the Allies to monitor the convoy movements came from decoding Italian secret communications. Specifically messages enciphered by the Italian Navy’s Hagelin C-38 cipher machine.
As such many authors and even the British official history ‘British intelligence in the Second World War’ mention this achievement in glowing terms and argue that it was of immense importance.
Is that true? Did Bletchley Park’s success with the C-38 have strategic implications?
The answer is yes and no.
It is undoubtedly true that the movements of the  Italian convoys could be followed by decoding their messages. For anyone who doubts that ‘British intelligence in the Second World War’ vol2 has an entire appendix ( Appendix 17-‘Contribution of Sigint to Axis shipping losses on North African route June to October 1942’ ) which lists Axis shipping sunk and the decoded messages that betrayed their journey.
The main source of information came from decodes of the C-38 cipher machine. This was a model built by  the Hagelin company and sold to many countries around the world. During WWII several countries used it for secret messages, including Italy, Portugal, Sweden and the USA. In American service it was called M-209 (slightly modified version).
The C-38 was a small but surprisingly powerful cipher provided that it was used well. If the internal settings were changed each day and if messages with the same indicator were avoided then it was very hard to ‘break’.
Unfortunately for the Axis it seems the Italians seriously misused it and thus made the British work much easier. According to a British report : ‘The very serious mis­use of it - monthly change of internal set-up, and change of slide about twice a week - robs it entirely of security’ [Source: J. J. Eachus, memorandum (nd), ‘Hagelin, as used by Italians’].
Moreover it seems that messages were frequently enciphered with the same settings so these ‘depths’ were used by the British codebreakers to recover the true settings. A ‘crib’ frequently used on those depths was ‘KSUPERMARINAKALTK’ (K was a word separator). [Source: Colossus: The secrets of Bletchley Park's code-breaking computers, Appendix 4]
In order to speed things up a cryptanalytic device named Nightingale was built and used by the British.
Thanks to these decoded messages the movements and often the contents of the convoys could be recovered in time for measures to be taken against them.
So that part of the story is clear, in which case why did i say no earlier?
Having the information is one thing. Using it is another. In order for secret intelligence to be of use in the field it is necessary for a military force to have the means to attack the enemy. In the first half of 1941 and 1942 the Brits had the information but could not attack the convoys because they lacked the necessary ships and aircraft.
Malta was used as a base for British planes and warships which attacked Axis shipping. When enough planes and ships were available they took a heavy toll on convoys. However when that happened the Germans intervened with their Luftwaffe (Fliegerkorps X  and later Luftflotte 2) and temporarily neutralised the island. This happened in the first halves of 1941 and 1942.
British efforts to move supplies and war material to Malta reversed the situation and allowed the German and Italian forces to take a heavy toll of British convoys.
Thus for long periods of time the Axis were able to transport large quantities of equipment unmolested even though their convoy routes were known to the enemy.
The other major issue is that even when the Allies made a major interdiction effort, against the convoys, the Italian Navy was able to transport the majority of supplies to N.Africa (in 1941-2)
Initially i was under the impression that the majority of supplies were sunk en route, at least that was the general impression that i got from books and articles. However a detailed look into the convoy statistics taken from the most official source ‘La Marina Italiana Nella Seconda Guerra Mondiale’-(1972) makes it clear that this was not the case.
Let’s have a look at the statistics:
Supplies by type: 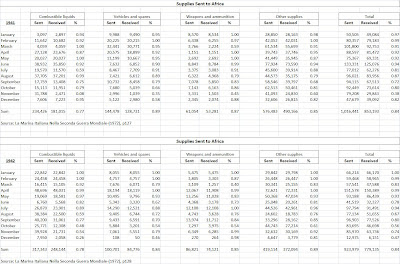 It’s obvious that the Italians were able to transport safely the overwhelming majority of the supplies. The total is 84% for both years. This is true both for the first halves of ’41 and ’42 when the British could not effectively intervene and for the second halves when they did.
However that does not mean that the British efforts did not have an effect. There is definitely a fall in the percentages. For first half ’41 we get 94%, for second half 73%. For 1942 the numbers are 94% and 74%. If we look at specific categories then we can find cases where there is a significant drop in the supplies received.
In 1941 the main outlier are fuel shipments in November and December .During those months a British naval force operating from Malta was able to attack and destroy Italian convoys. One of their most successful operations took place on the  night of 8-9 November. As a result in November only 8% of fuel supplies are received. However due to bad luck on 18 Dec ’41 the naval K force (2 cruisers plus 2 destroyers) operating out of Malta drifted into a minefield and out of 4 ships 2 were sunk and 2 heavily damaged.
In 1942 the major German effort to neutralize Malta through bombing was successful and allowed Italian shipping to cross the Med without problems. In the second half however British efforts resumed and we can see from the stats that fuel shipments were affected. In percentage terms we get 97% for first half and 63% for the second. If we look at absolute numbers it’s 134,585t versus 113,559t, a decrease of 16%. This doesn’t seem to me to be a loss of strategic proportions.
Especially in the period July-November 1942 an average of 22,300t of combustible liquids are successfully transported. These would be enough for the Axis forces if they had chosen a defensive strategy and stayed close to their supply ports.
It should also be made clear that when books conflate lost with not arrived (as in ‘British intelligence in the Second World War’ vol2, p422) they are making a big mistake. Not arrived ≠ lost. Convoys were often ordered to return to port when ships or planes had revealed their position.
I hope that from the information presented so far it is realised that Rommel’s eventual defeat cannot be attributed to inability of the Italian navy to transport his supplies. The numbers are clear. Instead the main problem for the Germans was their inability to supply their forces far from their supply ports (mainly Tripoli and Benghazi). This problem has been analysed quite extensively by the renowned military historian Martin van Creveld in ‘Supplying War: Logistics from Wallenstein to Patton’.
German efforts to shift the blame for their defeat in N.Africa to their Italians allies were ungentlemanly.
Despite their faults the Italians fought as well as could be expected from them .The Italian Navy especially managed to transport the war supplies to N.Africa and fought with distinction throughout the campaign.
In the end the solution of the C-38 was a major advantage for the Allied side. Misused by the Italians it supplied first rate intelligence on the convoy routes. However that information did not have strategic consequences, as the British forces could not mount an effective interdiction campaign for long periods of time and even when they did most of the supplies always got through.
Acknowledgements: I have to thank Andreas Biermann for the convoy data and Ralph Erskine for giving me the information concerning British efforts vs the Italian C-38.