Mr Jahnke was a colorful individual whose adventures certainly rivaled James Bond. He was born in Gnesen  in 1888 and after enlisting in the German navy he worked for the International Customs Service based in Peking. During his time there he made contacts with the Chinese secret service.


In 1909 he immigrated to the United States. There he became a naturalized citizen and actually served in the Marine Corps. He was posted to San Francisco, Pearl Harbor and the Philippines before being discharged for medical reasons.
From San Francisco he operated a shipping and smuggling business. According to Walter Schellenberg (head of the Sicherheitsdienst foreign intelligence department) Jahnke made a lot of money by smuggling back to China the bodies of dead Chinese immigrants. It seems that the Chinese community wanted to bury its dead back in Chinese soil and they were willing to pay big bucks for it.
Jahnke not only made money but he gained the confidence of powerful Chinese families.
Then with the break of WWI he turned into a spy and saboteur for Germany. He managed to sabotage American shipping and may have been involved in the explosion at Black tom island in 1916.
After the war he returned to Germany in 1921 and took part in anti French sabotage activities in the Ruhr. During the 1920’s he was also involved in the secret cooperation between the German and Soviet armies.
He also created an amateur intelligence service called the Jahnke-Büro which became connected with the Nazi statesman Rudolf Hess.
Eventually Jahnke’s backdoor dealings and the Hess affair led to his downfall and he retired to his estate in Pomerania.
During the war however Walter Schellenberg of the SD gave him another chance and used him as an advisor and intelligence source.
In 1945 Jahnke was arrested by the Soviet SMERSH agency. SMERSH meant ‘death to spies’ and in this case they lived up to their name as Jahnke was executed.
Why did I mention in the title that Jahnke could be a Soviet spy? For that we need to take a look at another individual, mr Krivitsky.
Walter Krivitsky (real name Samuel Ginsberg) was head of the Soviet military intelligence agency’s network in Western Europe. He defected in 1937 and managed to get to the USA where he wrote articles in newspapers attacking Stalin. Things did not turn out well for Krivitsky. The General was found dead in a Washington DC hotel on February 10, 1941. The death was deemed a suicide but was that the truth or a coverup?
Krivitsky knew many secrets and he was invited by the British intelligence service to share his information with them.  In 1940 he came to the UK and was questioned about Soviet spy activities.
How is Krivitsky connected to Jahnke? In one of these interrogation reports he mentioned that Jahnke had been a Soviet spy in the 1920’s. This is very interesting information considering Jahnke’s shadowy background.
Here is the relevant part of that report, Krivitsky is referred to as mr ‘Thomas’: 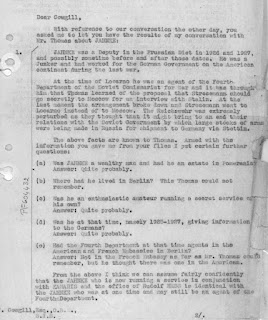 Was Jahnke a Soviet spy in the 1920’s? Perhaps.
Did he continue to work for the SU in the 1930’s and 40’s ? This is an interesting question…
Sources: KV 2/804 ‘Walter J. KRIVITSKY’ , Historical dictionary of German intelligence , Hitler's Last Chief of Foreign Intelligence , Wikipedia.