The North African campaign provides authors and researchers of signals intelligence with many interesting cases of ‘broken’ codes and compromised communications. Just as the German and British forces went back and forth like a see-saw the same thing happened in the field of intelligence.


Initially it was the Germans who had the upper hand and from mid 1941 to summer 1942 they benefited greatly from codebreaking. From then on however it would be the British who would succeed at reading their enemy’s codes (while keeping their own secure).
An exception to this story is something i found out about recently. Apparently Rommel had a microwave link from Derna, Libya to Athens, Greece and using it he could communicate with Higher Headquarters in Athens, Rome and Berlin.
Here is a map of the communication link, from FMS P-132 Supplement: ‘Signal Communications in the East: The Balkans and Finland’, p34 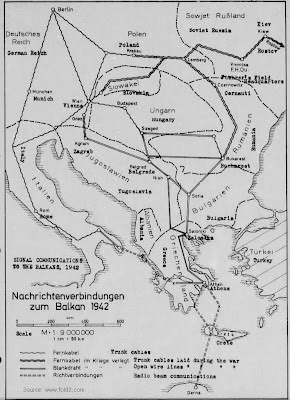 Apart from being difficult to intercept the traffic on this link was enciphered by cipher teletype, probably the Siemens and Halske T52 type. Voice communications were also enciphered with a prototype speech privacy system, at least for a time.


As far as I am aware there is no evidence that the British were able to intercept this traffic much less decrypt it.
This adds another layer in the intelligence war between Bletchley Park and Berlin and definitely diminishes the effects of reading Rommel’s Enigma ‘keys’ in the second half of 1942.
The information I’ve used comes from the following sources:
Microwave link Derna-Crete:


From FMS P-132 Supplement , p33 :
A permanent Ultra-short-wave radio communication channel operated by the Army Ordnance office later extended the Athens-Crete decimeter lines as far as Derna in Africa. By means of this channel the German Africa Corps could communicate by telephone and teletype over the permanent Balkan lines with the Italian Supreme Command in Rome, the German Luftwaffe Command in Sicily (later in Rome), the Luftwaffe units in Crete and Greece, and the Wehrmacht High Command. The line established communications between the outermost wing of the eastern Front and the Afrika Korps in Libya.
More details are given in FMS B-644 ‘Luftwaffe Communications (Greece and Crete)’ By Generalmajor Walter Gosewisch. 1947, p30
During the German drive on El Alamein one advance command post of the Commander in Chief South had been established at Derna (Libia). From here orders were issued daily by means of radio to the X Air corps stationed on Herakleion, (Crete). Owing to the danger of interception any concentrations of radio messages had to be avoided and consequently extension of the ground radio network became a matter of necessity. It was impossible, due to excessive diffraction, to transmit communications between Crete and Africa across the Mediterranean, a distance of 370 kilometers, by means of standard beam-microwave equipment which operated on a wave length of 53 centimeters.
An attempt was made, therefore, to accomplish this by installing extra powerful ultrashort wave transmitters operating on a wave length of about seven meters and by using intensely focused directional antennas. These transmitters made it possible to establish a sufficiently reliable connection which could be used for telephone and teletype traffic. The danger of interception was considerably greater when operating on a 7-meter wave length than on decimeter wave range and therefore this line was used mainly for teletype traffic by means of self coding teletype machines. (Geheimfernschreiber)


C. Superimposing noise of electrons on speech and taking it out by 180 degree phase; A fixed noise level was not at all successful, but a variable number when employed had some small degree of success. This plan was actually employed back in the North African Campaign when communication from Athens, Greece to Derna, North Africa via Crete was maintained. A noise level of 1 to 4 was employed; however, the problems involved outweigh the advantages derived and the equipment was destroyed by fire and never replaced.

The Germans used Kotowski’s concept as the starting point for developing a more sophisticated capability that was urgently needed in the early years of World War II. Gottfried Vogt, a Telefunken engineer under Kotowski, remembers testing a system for analog speech encryption in 1939. This employed a pair of irregularly slotted or sawtoothed disks turning at different speeds, for generating a noise-like signal at the transmitter,to be modulated/multiplied by the voice signal.The receiver’s matching disks were synchronized by means of two transmitted tones, one above and one below the encrypted voice band. This system was used on a wire link from Germany, through Yugoslavia and Greece, to a very  and/or ultra-high frequency (VHF/UHF) link across the Mediterranean to General Erwin Rommel’s forces in Derna, Libya.


The speech cipher device is described in the US patent US2211132A (found via klausis krypto kolumne commenter ‘Thomas’). 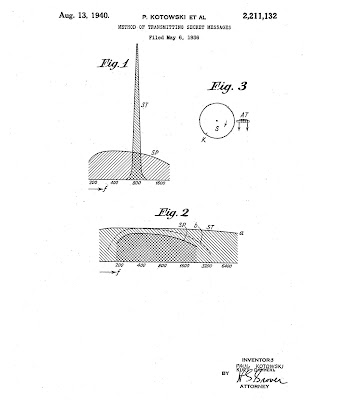 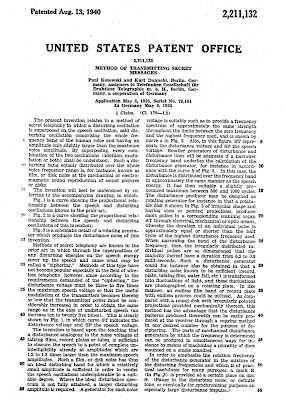 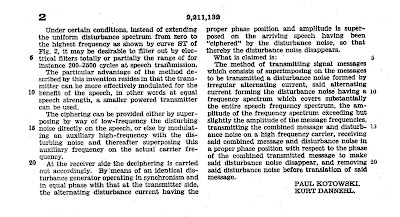