The German bombe and the M-209 cipher machine

Back in April 2012 I uploaded TICOM report DF-114 ‘German Cryptanalytic device for solution of M-209 traffic’.


This report is a translation of a German document retrieved in 1947. It describes a cryptanalytic device used by German codebreakers against the US M-209 cipher machine.
The only other reference in TICOM documents is in I-149 ‘Report by Uffz. Karrenberg and Colleagues on Allied Cipher Machines’ which says:

‘A cryptanalytic party, numbering about 20 men, under Wm. ENGELHARDT also worked with Senior Signals Recce Commander Oberst KOPP. The ENGELHARDT party worked on British and U.S. systems, using, among other things, an electrically driven apparatus constructed by themselves. (This was a heavy, black-painted metal box, measuring approximately 50 x 50 X 40 cm, composed of two parts of about equal size. In front of the machine was a keyboard, like a teleprinter. The machine was fitted in the upper part with a set of indicating lamps; when a key was depressed, a letter was illuminated above, as on the German cypher machine). The construction and function of this apparatus, and the systems with which it dealt, are unknown to us. It is alleged that complete solutions (not breaks-in) were achieved by mean of this machine.’


Thankfully an article in a German magazine had an interview with one of the persons who designed and used it during the war: 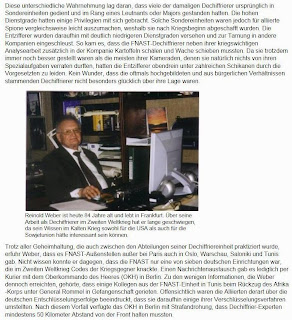 So when I posted that report I expected that people would be interested in the fact that the Germans had their own bombe. I also thought that someone would be able to explain the operating principle of the machine but again this hasn’t happened. What’s up with that?