In the 1930’s Hitler’s foreign policy was focused on dismantling the Treaty of Versailles that was keeping Germany militarily weak.


First compulsory military service was reintroduced in 1935, then the Rhineland was remilitarized in 1936 and finally the Sudeten territories of Czechoslovakia were annexed by the Reich in 1938.
In the diplomatic field the Germans were able to outmaneuver their British and French adversaries mainly thanks to two factors.


One was a disinformation campaign that convinced Western leaders of the Luftwaffe’s destructive power.
The other was their success in acquiring secret intelligence. The Forschungsamt, Goering’s personal intelligence agency, was able to decode French diplomatic communications (probably physically compromised) and eavesdrop on telephone conversations of politicians and diplomats (especially Czech president Benes and his ambassador in London Masaryk!). Thus Hitler was always one step ahead of his rivals.


In addition to these successes ‘European Axis Signal Intelligence in World War II’ volumes 1 and 7 reveal another very interesting case. Apparently during the negotiations regarding the fate of the Sudetenland German codebreakers were able to solve Prime Minister Chamberlain’s messages to London. EASI vol1, p21 says that ‘Hitler once delayed a conference with Chamberlain for several hours in order to get such decodes’.

The source for this information is listed as IF-132 ‘Das Forschungsamt des Luftfahrtminsteriums’  - Hq USFET Weekly Intelligence summary # 12, 4 Oct. 1945’.

Unfortunately page 5 of that document repeats the same story without giving more details. 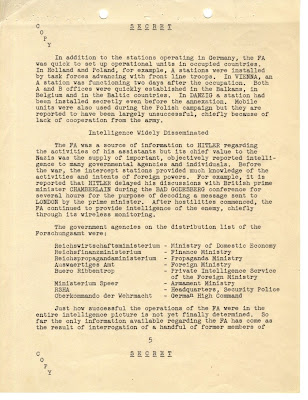 A clue regarding the cipher system used is available from the TICOM report DF-241 ‘The Forschungsamt - Part IV’, p40

‘Of the numerous examples which might be adduced, the following may serve as an example: The additive number used by Great Britain, which ran to 40,000 elements and served for the encipherment of the 5-digit code and was replaced at definite intervals of time, offered as a rule adequate assurance of security. But if in periods of greatly increased diplomatic activity with telegraphic traffic many times the usual volume the additive is not replaced correspondingly sooner, especially since increased security is desirable in such periods, then this is a sign of deficient control’. 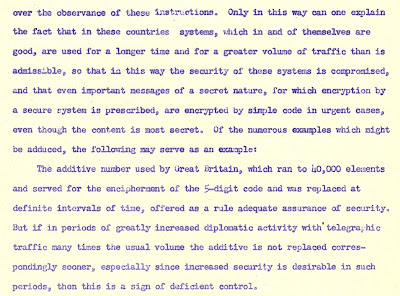 Thus it is possible that the German codebreakers were able to solve the British Foreign Office cipher in the 1930’s.

Despite an extensive attack in 1938 and 1939, the Germans failed to break the long subtractor system used to re-cypher the Foreign Office's basic cypher books. Against similar tables that were in force from November 1940 to January 1941 they had some limited success, but not enough to enable them to reconstruct the book before both the basic book and the tables were again changed. There is no evidence of later success, and according to German testimony after the war the main Foreign Office systems were never broken’. 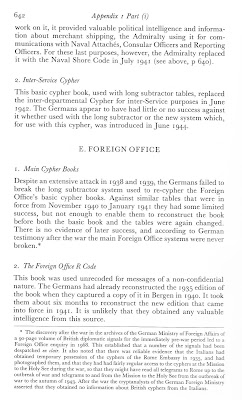 However in the notes it also says:

‘The discovery after the war in the archives of the German Ministry of Foreign Affairs of  a 90-page volume of British diplomatic signals for the immediately pre-war period led to a  Foreign Office enquiry in 1968. This established that a number of the signals had been dispatched en clair. It also noted that there was reliable evidence that the Italians had obtained temporary possession of the cyphers of the Rome Embassy in 1935, and had photographed them, and that they had had fairly regular access to the cyphers at the Mission to the Holy See during the war, so that they might have read all telegrams to Rome up to the outbreak of war and telegrams to and from the Mission to the Holy See from the outbreak of war to the autumn of 1943. After the war the cryptanalysts of the German Foreign Ministry asserted that they obtained no information about British cyphers from the Italians’.