In the period 1941-43 the main theatre of war between British and German military forces was North Africa. There British forces had to fight against the German Africa Corps and the Italian Army.


The RAF strength during this period was the following: 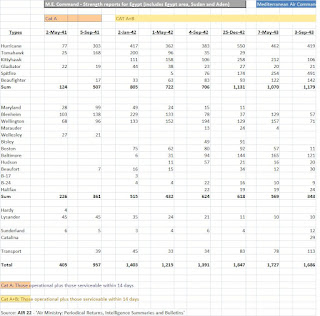 
Numbers refer to planes operational plus those serviceable within 14 days. 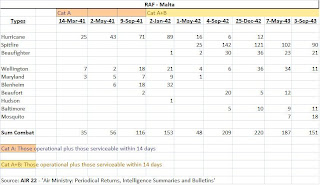 
In terms of quality the picture is not as clear as regards quantity. Even though the Brits have the excellent Spitfire fighter, in the Med they use the outdated Hurricane and the US P-40. Both these planes are inferior to the Bf-109. The Spitfire is finally used from mid 1942 but is only available in large numbers in late ’42.


The bomber force also suffers from mediocre quality. Initially it is made up of the outdated Blenheim and Wellington types. In 1942-43 the US types Boston, Maurauder, Baltimore, Maryland and Hudson are also used.


Lend Lease plays a vital role in N.Africa, as the American P-40 fighter and the Boston, Maurauder, Baltimore, Maryland and Hudson bombers make up a large part of RAF strength in the theatre (roughly a third of ME Command in 1941-42).


Unfortunately I don’t have similar data for the Italian AF but Luftwaffe strength for Luftflotte 2 and Sud Ost has been posted here.


The RAF had a significant numerical advantage over the German AF, however that does not mean that the Germans were always outnumbered.


Against Malta the Luftwaffe could concentrate a large force of fighters and bombers operating from Sicily. In the first half of 1942 they had between 300-400 combat planes versus less than half as many British planes.


On the other hand in North Africa it was the Brits that had crushing superiority. The strength of Fliegerführer Afrika fluctuated between 200-300 planes versus up to 6 times as many in Middle East Command.


The Germans also faced serious supply problems that forced them to rely mainly on the Bf-109 and Ju-87. Bombers like the Ju-88 could not be permanently based in N.Africa but operated from Italy and Greece and were resupplied in N.African airports. The RAF on the other hand had the benefit of a large number of twin-engined bombers operating from N.African bases.