The Luftwaffe was one of the most interesting aspects of the German war machine. Built from the ground up in the 1930’s it dominated the skies over Europe in the first half of the war. Even in the latter part, when it was grossly outnumbered by the Allies, it continued to fight on till the last day of the war.


In the East the Luftwaffe played a vital role by establishing air superiority, supporting the ground troops at the front, bombing important targets deep behind enemy lines and keeping the enemy under constant observation with its recon planes.


Unfortunately the full effects of the Luftwaffe’s efforts in the East are not usually mentioned in most books.


Stopped at Stalingrad closes this gap by covering, in great detail, the operations of the Luftwaffe in the summer campaign of 1942. The author Joel Hayward is an expert on Luftwaffe history and operations. 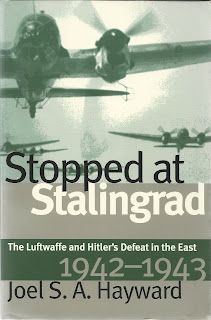 The first chapters cover the German conquest of the Crimea in the summer of ’42 and show the great contribution made by the Luftwaffe.  Using airfields in the Crimea aircraft could operate throughout the day on one fuel load and only landed to reequip with bombs. Thanks to massive air support the Soviet forces in the Kerch peninsula were defeated and Sevastopol leveled.


In May ’42 a surprise Soviet attack in the Ukraine using their armored forces was soundly defeated thanks to swift Luftwaffe intervention.


The rest of the book deals with the German attack on the Caucasus and details the countless missions that the Luftwaffe had to perform every day.


When the Soviets counterattacked at Staligrad and the 6th Army was surrounded, it was up to the Airforce to provide supplies. Hayward is one of the few authors who cover the Stalingrad supply missions in detail.


Finally the book ends with the German counterattack in the Ukraine in early 1943. The ground troops again received outstanding support from their Airforce.


In all these operations the Luftwaffe played a vital role thanks to its ability to generate a very large number of sorties from forward airfields. Especially the ground attack units under General Wolfram von Richthofen acted as flying artillery.


The book was a best seller for a reason. It is highly recommended for anyone interested in the Luftwaffe and/or the Eastern Front.