With part 3 i thought i was done with the Russian Fish but due to sheer luck i found even more information regarding Jack Gurin and the teletype network.
From the NSA publication  '' The Invisible Cryptologists:African-Americans,WWII to 1956''

The ASA effort to exploit Russian plaintext traffic began in 1946 with the part-time assignment of several linguists to the target. At that time, however, the Agency’s emphasis was on the translation of encrypted messages, and the employment of scarce Russian linguists on plain text was judged to be unwarranted. Later, in May 1947, the effort was revised at the Pentagon. Individuals without security clearances or with partial clearances would sift through volumes of messages and translate all or parts of those determined to have intelligence value. Placed in charge of this group was Jacob Gurin, an ASA Russian linguist who had immigrated to the U.S. with his parents at the age of three. A graduate of New York University, “Jack” grew up in a Russian-speaking household and spoke the language fluently. During the war, he served as a Japanese linguist for the U.S. Army, and after discharge, applied to the Army Security Agency. In1946, native speaking Russian language ability was a valuable and rare commodity.Security concerns arising from his birthplace were resolved, and he joined the organization as a Russian linguist. Within months of his entry on duty, he engineered a revolutionary approach to the exploitation and reporting of Russian plaintext communications.
While individual decrypted messages could be extremely valuable, plaintext messages were most often preformatted status reports that were insignificant when considered singly. Jack Gurin was convinced that if these messages were assembled and analyzed in the aggregate, they could yield valuable information on Soviet defense capabilities. Initially, three linguists were assigned to him plus a writer/editor. Their task was to select messages that qualified for immediate translation and publication or which could be used in a research report on a subject of interest.

Much of the intercept data was passed to the linguists by a group of processing personnel who would provide page print-outs of material that had been sent to the agency on tape. The tape conversion process involved running a paper tape of radioprinter signals through a machine (the CXCO tape printer) which read coded perforations and printed the corresponding Cyrillic characters. 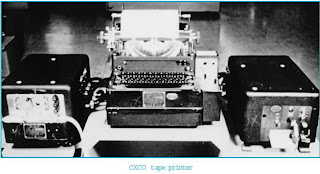 The development and expansion of the traffic processing unit are inextricably linked to the
tremendous dependence on the exploitation of Russian communications for intelligence following Black Friday. That day, 25 August 1948, the chief of the Soviet General Staff declared that “the transmission of . . . messages is permitted only by landline.”Within weeks, Soviet communications systems that had been successfully exploited since 1945 went off the air. The series of communications changes that began in November 1947 and culminated on Black Friday were catastrophic. Out of this devastation, Russian plaintext communications emerged as the critical provider of intelligence on our primary Cold War adversary


…………….
By July 1950, over a million messages a month were being forwarded to AFSA for processing and exploitation. The plaintext exploitation unit stood at 170, and it was projected that by April 1952, the volume of messages requiring processing would nearly double, requiring an additional 350 people.During the 1950/1951 time frame, Russian plain text was nearing its zenith in terms of intelligence priorities, collection resources, and personnel; and AFSA-213, the all-black traffic processing branch (later a division) that came to be known as “the snakepit,” “the plantation,” and “the black hole of Calcutta,” was in full operation


ll Russian plaintext traffic forwarded to Arlington Hall Station from U.S. sources was received in AFSA-213. In mid-1950, a paper delivered to Captain Mason (AFSA-02, Chief of Operations), entitled the “Russian Plain Text Problem,” placed the AFSA-213 manning at 98 and projected the 1952 personnel requirement at 218. The paper also supplied a concise, descriptive account of the work performed in the traffic processing branch:
The incoming material is of two types,printed messages and perforated radio printer tapes. The printed messages result from the collection of either . . . radio printer communications that were intercepted using standard teletype equipment or . . . morse transmissions that were transcribed from undulator tape recordings.. . . radio printer communications are recorded and printed on perforated teletype tapes in the field, and the tapes are forwarded to AFSA for processing. Once the material arrives in the Traffic Division, the employees scan it for keywords, addresses, and signatures. Messages that meet the selection criteria are assigned a two-digit routing number that separates them into homogenous groupings. Messages that are on tape are sent to the tape printing section for conversion to hard-copy. The selected, printed messages are then stamped with a one-up serial number and microfilmed. In the final step, they are sent to the sections of the plain text branch, according to the two digit routing number assigned during the initial scanning process


So is the interception of this  teletype network connected with the German demodulator? Although we can't be sure  it seems likely .The NSA history mentions foreign COMINT specialists and from Bamford's book : "They intercepted printers at Vint Hill, Russian printers," said Colonel Russell H. Horton, who commanded the station shortly after the end of the war. "They had these ... circuits that had nine channels if I'm not mistaken. They had machines ... all hooked up so that they separated the channels and did all of the interception in Cyrillic characters."  .