In parts 1 and 2 we saw that in May 45 a TICOM team discovered a German unit that was equipped with specialized equipment for intercepting and demodulating soviet multichannel radio teletype traffic.According to Bamford : ‘’ Two TICOM members, including First Lieutenant Sehner Norland, who would also go on to a long career at NSA, accompanied the equipment and soldiers back to England. There it was set up near Bletchley Park and quickly put into operation. It, or a working model, was later shipped back to Washington. So what happened after that ? How did the US and Britain use it ?


One key listening post not shut down was Vint Hill Farms Station. Known as Monitoring Station Number 1, it was located in the rural Virginia town of Warrenton. During the war, Vint Hill played a pivotal role in eavesdropping on enemy communications for thousands of miles in all directions. At war's end, 2,600 people stayed on, many of them intercept operators, to handle the transition from hot war to cold war. They were able to eavesdrop on key Russian diplomatic and military communications sent over the Fish machine. "They intercepted printers at Vint Hill, Russian printers," said Colonel Russell H. Horton, who commanded the station shortly after the end of the war. "They had these ... circuits that had nine channels if I'm not mistaken. They had machines ... all hooked up so that they separated the channels and did all of the interception in Cyrillic characters." Horton added, "As far as I know, there was no effort against the Russians until after the war’’.


By the end of the 1940s and into the early 1950s, American listening posts could monitor Soviet radio voice and data traffic in the air and produce real time signals intelligence. The National Security Agency found a way to tap into Soviet internal teletype communications. These teletyped messages were unaided, clear transmissions on a multichannel communications network similar to Western Union that carried operational data on Soviet industrial and military production. These intercepts were a major source of data for analyzing Soviet military strength and strategic intentions.


So  it’s  clear that the Russians used unenciphered teleprinters in this network.


Now let’s see what pieces of the puzzle we can fill from more official sources.Specifically the NSA history  ‘’American Cryptology during the Cold War:  1945-1989 ,Book I: The Struggle for Centralization 1945-1960’’  and  Oral History Interview of Oliver Kirby. 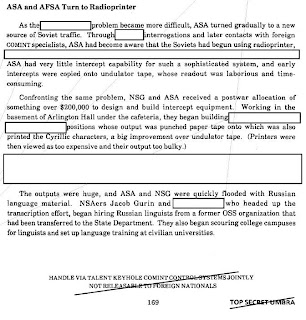 This small paragraph mentions radioprinter, ?  interrogations ,foreign comint specialists ,NSAer Jacob Gurin and an OSS unit.Is it referring to TICOM/CSDIC interrogations and German specialists ?
From the Kirby interview :
KIRBY  Not during the war. The end of the war, right at the end of the war.
BAKER That would be sort of a natural with the Russo-Finnish...(B°/0 staring) right across the border, if you just thought about it.
KIRBY  Yeah, but ??? i remember that. I remember it was very interesting. Oh believe me, young man, coverage? Hell, we didn't have a capability to cover what was the biggest traffic-carrying thing going which was the ?????? We had no capability whatsoever.
He is referring to Soviet traffic but of what kind  ? Maybe the  radioteletype network ?
p39
VANDERPOOL And this was just the Russian problem, sir?
KIRBY Just this part of the Russian problem. But I also had become aware in TICOM of the printer problem, and so I was the only one pushing at that time for, "Hey, we've got to tackle this printer," because I also had heard from the British, I think, that they had a scrambler in there. I had already done the German scrambler. I was just getting converted to that, and I thought, heck, that would be nice to work on the scrambler problem.
HATCH Because these 35 to 40 (people) were just working Morse decrypt and cablegrams.
KIRBY They were working mostly just getting the cable stuff in order and figuring out the 'A" net and the "B" net and taking the intercept that was coming in and seeing if they could sort it and make it Russian versus something else. They had been doing work on the cable traffic, but this was to begin work on the overall (B% front). That's what it was for, and so I was asked to do It; start getting this problem pulled together. That's when I came in. And Cecil Phillips knew a lot about the cable stuff so I proceeded not to pay a heck of a lot of attention to that. That was being taken care of. That's all that was being taken care of. So then we went to work on the other stuff.
p51
BAKER Plus you've got burgeoning plaintext.
KIRBY Yes, and we began to really exploit and find that there was a gold mine in the plaintext in terms of intelligence, and I mean highly-desired intelligence.
BAKER Was Jack (B% Goering) already working with you then?
KIRBY Yes, Jack was one of the people we brought in very early on that. Jack was really in charge of the linguistic effort on that, and we then found Olin Adams in '47 working in the remains of an OSS group down in the old State Department building, and we hired away that whole group. And I received some bad slaps on the back of the wrist because of proselyting (sic) of...since we really decimated the entire unit. But then the people themselves, to the investigators, told them that there was no future in what they were doing. They didn't know how long they would be employed, and so basically that just disappeared. But we were desperate for linguists.
BAKER But you solved that problem very quickly.
KIRBY Well, not very quickly. We had a lot of new linguists from that one unit, and then as time went on we kept adding more linguists as time went on. And we began to develop machine methods of scanning and pulling out traffic so that one person could effectively look through a lot more traffic in a great hurry.
BAKER Was this (XG)?
KIRBY Ah, yes. Right, yes.
BAKER Okay, but the linguists you're still hiring from the outside. You're not building them your-self.
KIRBY Oh yes, but we're training too.
BAKER Oh, you are building some yourself? Okay, good. Now you're still leaving it up to the services to train them, or did the school develop them here?
KIRBY No, we were training them ourselves. The school...it might not have been the school, but we had our own training programs going which later became the school, so we were already developing our own linguists. There were internal classes and sending people to school at universities and a whole variety of things which now are formalized under various terms, but...(cut off by Baker)
So the OSS group from the NSA history is mentioned .Also is  Jack Goering =Jacob Gurin  ?
Seems like Kirby was probably in charge/involved with the unit that intercepted the teletype traffic.The information intercepted was according to ''Sacred Secrets'' and the Kirby interview very  valuable despite the fact that the network was unenciphered.Obviously the volume of traffic was so great that important information constantly slipped in.Was this the same network that was intercepted by the Germans during the war? Praun also mentioned military and economic traffic in multiplex radio teletype circuits. Many questions remain but I’m reasonably confident that the information presented so far is accurate. I hope some researcher or author manages to uncover more of these secrets.