The use of signals intelligence and codebreaking by the Germans and Soviets in the Eastern front is a subject that has received very little attention by historians so far. The main reason was the lack of adequate sources. The archives of the Soviet codebreaking organizations remain closed to researchers but in the last decade many important documents on German signals intelligence operations have been released to the public archives.

From these documents it is clear that the Germans invested significant resources in their signal intelligence agencies and relied on their output during the fighting in the East. Against an opponent that outnumbered them in men and war materiel (tanks, planes, artillery) signals intelligence gave them the opportunity to monitor enemy movements and make efficient use of their limited resources.

The cryptologic systems used by the Soviet Union at low and mid level were extensively compromised during the war and in 1941-42 even their high level 5-figure code could be read.

It seems that in 1942 a detailed report was prepared on the German exploitation of the Soviet army’s 5-figure code. The report of Area X - (Gebiet X) of April 1942, from the war diary of Inspectorate 7/VI, says: 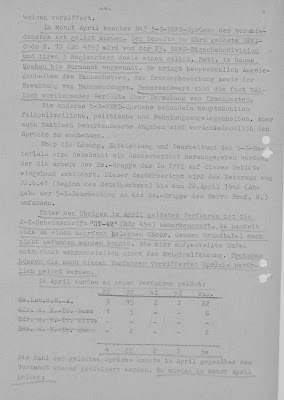 A special report will soon be issued that will describe in detail the work of the deciphering group of In 7/IV in solving, developing and processing the Russian 5-figure code. This special report will cover the period from 22.6.41 (the start of the eastern campaign) until 22 April 1942 (handing over the processing to the deciphering group of Professor N.).

Unfortunately I have not been able to locate this file and it is not mentioned in TICOM report IF-272 which lists the files of Inspectorate 7/VI recovered in 1947 from a camp in Austria.