In WWII Poland fought on the side of the Allies and suffered for it since it was the first country occupied by Nazi Germany. In the period 1940-45 the Polish Government in Exile and its military forces contributed to the Allied cause by taking part in multiple campaigns of war. Polish pilots fought for the RAF during the Battle of Britain, Polish troops fought in N.Africa, Italy and Western Europe and the Polish intelligence service operated in occupied Europe and even had agents inside the German High Command.

Although it is not widely known the Polish intelligence service had spy networks operating throughout Europe and the Middle East. The Poles established their own spy networks and also cooperated with foreign agencies such as Britain’s Secret Intelligence Service and Special Operations Executive, the American Office of Strategic Services and even the Japanese intelligence service. During the war the Poles supplied roughly 80.000 reports to the British intelligence services (1), including information on the German V-weapons (V-1 cruise missile and V-2 rocket) and reports from the German High Command (though the agent ‘Knopf’) (2). In occupied France the intelligence department of the Polish Army’s General Staff organized several resistance/intelligence groups tasked not only with obtaining information on the German units but also  with evacuating Polish men so they could serve in the Armed Forces (3).

Poland’s role in WWII is well known, especially the success of Marian Rejewski, Henryk Zygalski and Jerzy Różycki during the 1930’s in solving the Enigma cipher machine, used by the German Armed forces. It is important to note that countries with large cryptologic staffs such as France and Britain had not managed to solve this device, in that time period.

Although the Poles were successful in the offence they neglected their defense. Their diplomatic, military attaché, resistance movement and intelligence service codes were read by the Germans during the war. Especially important for the Germans was the solution of the cipher used by Major Szczesny Choynacki, Polish deputy consul in Bern, Switzerland.

The telegrams of Major Choynacki

Choynacki regularly communicated with the Polish intelligence service in London and transmitted valuable reports from his agents/contacts in Switzerland and throughout occupied Europe.

His cryptosystem consisted of an enciphered codebook. The codebook contained 4-figure groups and was enciphered with a version of the British Stencil Subtractor Frame. The codebreakers of the Signal Intelligence Agency of the Supreme Command of the Armed Forces - OKW/Chi (Oberkommando der Wehrmacht/Chiffrier Abteilung) were able to solve this system in late 1942-early 1943 and from then on his voluminous traffic to London was continuously decoded (4).

Details about the content of these messages are available from the postwar interrogations of German intelligence officers, specifically Willy Piert and Hans Von Pescatore (5). They were both members of the German Legation in Bern and they conducted intelligence operations against the Allied agencies and even the Swiss IS.

The decoded messages revealed that Choynacki had well placed agents numbered in the 500 series. 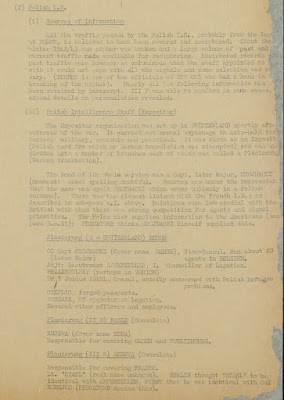 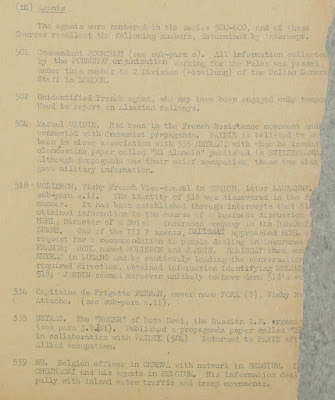 According to the Germans the most damaging agent was No 594, Isidore Koppelmann, a Jewish banker living in Basel. One of Choynacki’s decoded messages was used to uncover his identity. 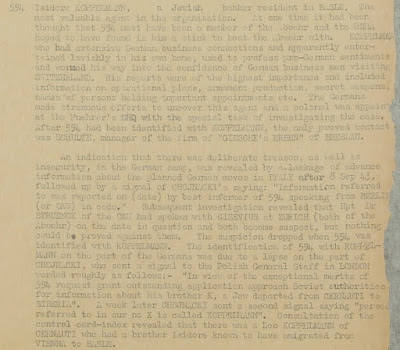 It is up to historians to research this case further and identify the full extent of the damage caused to the Polish networks from the compromise of their communications.

Another interesting German operation, mentioned in the interrogations of Piert and Pescatore, was one directed against the US embassy in Bern, Switzerland. In 1941 the Germans were able to recruit a Swiss national who worked in the US embassy. This person, named Fuerst, had access to the office of the US military attaché General Barnwell R. Legge and he was able to take documents plus the used carbon paper and give it to the Germans. These documents revealed some of Legge’s sources: 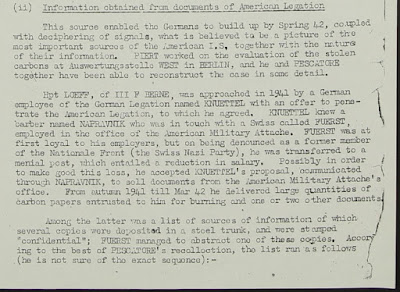 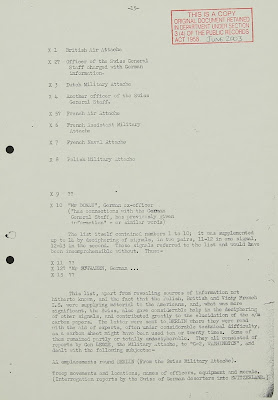 Although Fuerst was apprehended in March 1942 the information he provided, coupled with decodes of US traffic (6), gave the Germans an insight into the sources and operations of the US intelligence agencies.

(6). The compromise of the communications of General Barnwell R. Legge, US military attache to Switzerland

Acknowledgments: The credit for locating the very interesting Piert/Pescatore report goes to Craig McKay, author of Major Choynacki’s Ace: the Solution to an Old Puzzle of Wartime Intelligence.
Posted by Christos T. at 7:36 AM