During WWII the German armed forces were always short of equipment, especially trucks and combat vehicles. In order to deal with this problem they made extensive use of captured French, Italian, Soviet and British vehicles.


Foreign tracked vehicles and tanks were refurbished, brought up to German standards when possible (for example by installing a commander’s cupola in tanks) and used mainly in auxiliary roles by security divisions or as tank tractors by combat units.


My source on the German use of captured Soviet tanks and their technical evaluation is ‘Panzer tracts no. 19-2: Beute-panzerkampfwagen’ by Thomas Jentz and Werner Regenberg. 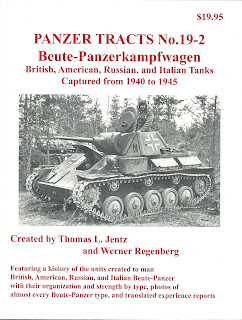 
The success of operation Barbarossa led to the encirclement of many Soviet formations and huge numbers of Soviet tanks were left abandoned in the fields. The Germans made a serious effort to collect some of them and put them to use.


Just after the start of ‘Barbarossa’ the Army High Command – OKH ordered that the supply staffs (Feld-zeugstaebe) were to be reinforced for the purpose of seizing enemy tanks. The following Kommandos were created: Ob.Pz.Stab Nord in Insterburg, Ob.Pz.Stab Mitte in Warsaw, Ob.Pz.Stab Sud in Cracow and Ob.Pz.Stab Rumanien in Bucharest. At the same time the Sicherungs-Divisionen (rear area security divisions) were ordered to organize captured tank platoons.


By September 1941 some vehicles were sent to security divisions, including 10-12t ‘Christie’ and amphibious ‘schwimmpanzer’.


The reliability of the T-26 tanks was not satisfactory. Security Division 221 reported in October ’41: ‘The Pz.Kpfw.Zug created by the division is no longer operational. One Panzer is completely burnt out due to an engine fire. Both of the other Panzers have engine and transmission problems. Repetitive repairs were unsuccessful. The Panzers always broke down after being driven several hundred meters on good roads. As reported by technical personnel, both of the engines in the Panzers are unusable because they were incorrectly run in.’


The commander of the Panzersug.Sich Regt 3 in Army Group North noted: ‘The Russ.kampfwagen completed at the Waffenwerkstatt (Arsenal) Riga all broke down due to mechanical failures.’


The BT tank also came under criticism: ‘B. T. (Christi): The main cause of failure is a transmission that is too weak in combination with a strong engine that should provide the tank with high speed, but is over-stressed when driven off road where the lower gears must be used for longer periods. In addition, as in the T 26, problems continuously arise that are due to entire design and poor materials, such as failure of the electrical system, stoppages in fuel delivery, breaks in the oil circulation lines, etc.’ 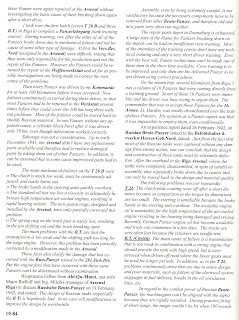 
On 30 July 1943 the OKH/GenStdh/GenQu/Abt.III/Gr.V communicated a program for the retrieval of enemy vehicles.


Units that retrieved a fully operational T-34 would get as reward two self propelled A/T guns or if the units was up to strength three ‘maultier’ trucks. Infantry and assault units would receive two 75mm Pak 40 guns with towing vehicles.


The simple infantryman had other reasons to risk his life for a T-34. As the report said: ‘OKH also has established special distribution of market wares as a premium for recovering a non-operational Pz.Kpfw. T-34 (40 bottles of alcohol), for a complete engine, transmission, gun sight, or radio set (6 bottles), and for a complete gun, radiator, starter etc. (1 to 3 bottles).’


The Kliment Voroshilov (KV) tank was used by the Soviets in limited numbers but its heavy armor and 76mm gun commanded respect in the battlefield.


Its German equivalent was the famous Tiger tank. These two enemies actually joined forces. The Germans used captured KV tanks for towing their Tigers since the KV was one of the few vehicles that could tow the heavy Tigers.


A German report of September 1943 says: ‘Based on previous experience in recovering Panzers, OKH has decided that Beute-Pz.Kpfw. KW I are to be used as Bergepanzer. When still present the weapons, the turret, and the gun are to be left on to increase the traction weight and also to be used in defense of the Berge/commando. Use of these KW I as Bergepanzer is decisive because of the shortage of equally heavy and suitable German towing vehicles for recovering heavy Panzers. Also, it is forbidden to divert armed KW I issued as Bergepanzer to combat tasks.’


Small numbers of T-34 tanks were used by several security and field units. These were used for anti-partisan operations or as tank destroyers.


The SS Panzer-grenadier Division ‘Das Reich’ used the T-34 in combat in 1943. This unit received in May 1943 25 T-34’s in need of repairs. These were overhauled at the ‘SS T-34 Instandsetzungsbetrieb Tuebke’ locomotive plant.


The strength reports show that in 11th May  there was only 1 T-34 operational but in July 1st 16 out of 25 were operational.


Another unit that used the T-34 model 1943 (hexagonal turret and commander’s cupola) and Su-85 was the 2 Kompanie/Panzerjaeger-Abteilung-128. Their report of June ’44 has interesting information on the strengths and weaknesses of these vehicles.


Apparently automotive performance was poor:
‘Regardless of our limited experience, it can be stated that the Russian tanks are not suitable for long road marches and high speeds. It has turned out that the highest speed that can be achieved is 10 to 12 km/hr. It is also necessary on marches to halt every half hour for at least 15 to 20 minutes to let the machine cool down. Difficulties and breakdowns of the steering clutches have occurred with all the new Beute-Panzer. In difficult terrain, on the march, and during the attack, in which the Panzer must be frequently steered and turned, within a short time the steering clutches overheat and are coated with oil. The result is that the clutches don't grip and the Panzer is no longer manoeuvrable. After they have cooled, the clutches must be rinsed with a lot of fuel.’ 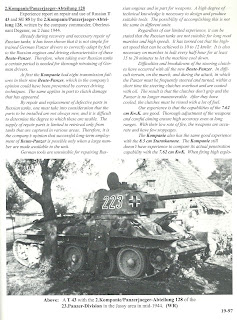 And as in all T-34’s visibility was a problem:


‘The gun sights in Russian tanks are far behind the German designs. The German gunners need to be thoroughly accustomed to the Russian telescopic gunsights. The ability to spot a hit through the gunsight is very limited.’


‘In a Russian tank it is difficult to command a Panzer or a unit and at the same time serve as the gunner Therefore fire direction for the entire Kompanie is hardly possible, and the concentrated effect of the unit’s firepower is lost. The commander's cupola on the T 43 makes it easier to command and fire at the same time; however; vision is very limited to five very small and narrow slits.’


‘Safe driving and sure command of both the T 43 and SU 85 can't be achieved with the hatches closed. We base this statement on our experience that on the first day in combat in the Jassy bridgehead, four Beute-Panzer got stuck in the trench system and couldn't get free with their own power, resulting in the destruction of German defensive weapons during the attempt to retrieve them. The same thing happened on the second day.’


However the gun was considered good and the unit could operate well in a tank destroyer role:


‘Our experience is that the capabilities of the 7.62 cm Kw.K. are good. Thorough adjustment of the weapons and careful aiming ensure high accuracy even at long ranges. With their low rate of fire, the weapons are accurate and have few stoppages.’


‘Based on all these facts, the Kompanie concludes that the success of using captured tanks as a Panzer is questionable. The results of the last days in combat in the Jassy bridgehead have shown that their employment as a Panzerjaeger appears suitable.’


The German reports presented so far point to significant reliability problems for the Soviet vehicles. The comments on the T-26 and BT are overwhelmingly negative. Even the mythic T-34 comes under criticism. Are these statements credible or are they a result of German bias?


First of all we need to remember that the vehicles used by the Germans were retrieved from the battlefield so they would not be in pristine condition. Moreover the Germans were not trained in servicing them nor did they have a source for spare parts.


The units that operated these vehicles were also not first rate and inexperienced drivers could damage the vehicles.


Still the problems mentioned in German reports match those described in American evaluations of the T-34 (problems with transmission, electrical system, engine etc).