Codebreaking and the Stalingrad pocket battles

In the summer of ’42 the German forces in the East managed to surprise the Soviet High Command by attacking in the area of Army Group South. The Germans together with their Rumanian, Hungarian and Italian Allies overwhelmed the Soviet troops and advanced far in the Soviet South towards the oil producing areas of Baku.


However their efforts to clear the western part of the Volga were checked by the Soviet forces defending Stalingrad.


In November ’42 the Soviets, after secretly massing their forces, counterattacked and used their mobile forces against the flanks of the German front that were defended by the German Allied nations. The result was the collapse of the front and the encirclement of the Stalingrad troops.


The siege of Stalingrad started again but this time it was the Germans that were defending. Outmaneuvered and outnumbered they did however manage to hold on and occupy significant Soviet forces till early ’43. This allowed the rest of Army Group South to extract its units and avoid an even worse disaster.


Were the Germans able to prolong the Stalingrad battle through superior intelligence? It seems so according to Foreign Military studies D-271 ‘The Battle of Stalingrad. Signal Communications in the Pocket of Stalingrad and Communications with the Outside’ by Generalmajor Wilhelm Arnold-1947. 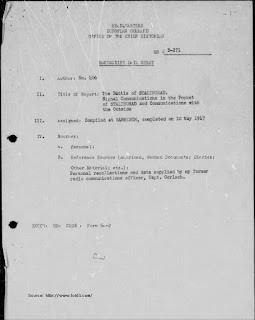 By reading Soviet encoded messages their plans could be ascertained and the limited units available were moved to the threatened sectors in advance.


The intercept companies, consisting of an evaluation section and three platoons, were at the disposal of Sixth Army in the pocket of STALINGRAD. In addition to these units we had two intercept platoons of Fourth Panzer Army, thus a total of five intercept platoons. During the entire period of the encirclement the work of this reinforced intercept company was of the utmost importance to Sixth Army. The surrounded Army had no other means of collecting information about the enemy. A desperate attempt to send the three fighters in the pocket on a reconnaissance mission had failed. As a result, Army G-2 moved his entire section into the bunker of the intercept company's evaluation detachment. Fortunately, a large group of Russian interpreters had been assigned to the intercept company for some time. After the intercept stations had been installed, and the company had acquainted itself with the new assignment, we were able to determine the organization and approximate strength of the opposing Russian forces within a relatively short time. At first, Russian radio discipline was poor which enabled us to intercept and evaluate a series of clear radio messages. In the north-east sector, at least, this condition changed only when a new, apparently strict Russian signal officer was assigned there. He repeatedly prohibited all transmission of uncoded messages under threat of immediate execution of violators. However, even most of the coded Russian radio messages were deciphered by the intercept company quickly enough to be fully exploited. During the preceding year we had sent many specialists of the intercept company to Army Group or to the ZY for thorough training in deciphering the Russian three-, four-, and five-figure codes. That measure now yielded good results.


The well-coordinated employment of the five intercept platoons enabled us to present Field Marshal Paulus almost nightly with a complete picture of the changes that had occurred in the Russian lines during the day. In most instances we were able to determine the Russians’ intentions for the following day. We could then rush the few tanks that were still maneuverable to the threatened points in time. In the south and west it was even possible to intercept regularly the exact Russian tank status reports.


On 12 December 1942, when General Raus began his relief thrust from the south through the Kirgize Steppe on STALINGRAD, with his very strong 6th Panzer Division (200 tanks and assault guns) and the very weak 17th and 23d Panzer Divisions (with only few tanks), several radio sets of the signal company, and a few sets of the intercept company were tuned in on the frequency channels of this relief force. General Raus' command channel, the channels of the forward divisions and the regiment in the main effort were monitored, and as the relief force continued its advance the voice communications of the armored spearheads also became audible. Simultaneously, the intercept companies monitored the command channels of the Russian forces (primarily that of General Popov) which faced the forces of General Raus. This method of intercepting messages from both friendly and hostile forces provided us continuously with a fairly clear picture of the situation. Intercepted reports of particular importance were passed on to General Raus by radio. Thus, the German signal units performed their duty at STALINGRAD even under the most trying conditions. Field Marshal Paulus told me several times that their achievements helped us materially to endure in the long and bitter struggle.’ 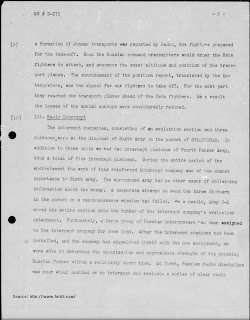 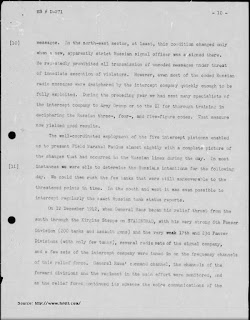 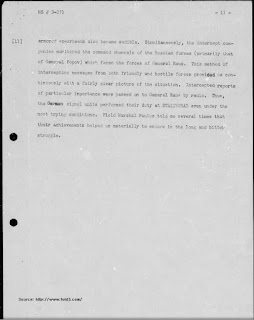