An interesting question that pops up on the internet is if the Germans could have defeated the Allied landings in Normandy. People like to talk about deception plans, Hitler sleeping until noon, Rommel not having command of the Panzer divisions etc etc etc .These discussions are very simplistic and come to the conclusion that if only Hitler hadn’t done x or y things would be different. They also seem to forget that apart from Normandy there were also the  Southern landings.


I think that by simply looking at the strength of German and Allied forces in Normandy on 6 June ’44 we can come to a definite conclusion regarding the outcome of that battle. 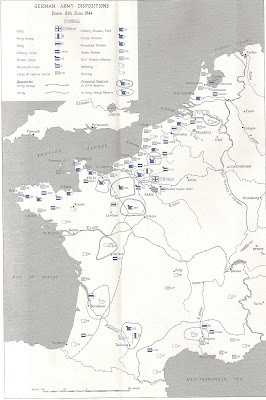 Total strength : 150.000
Armored vehicles : 922
Those numbers are for 6 June only.
In the entire western theatre the Germans had about 2,000 tank and Stug vehicles  [Source: Panzertruppen vol 2 1943-1945 ,  Sturmgeschutz & Its Variants ].
The Germans managed to get more than 922 AFV’s to Normandy on 29 June ’44 ( accumulated AFV strength committed: 1,124),[Source: Normandy 1944: German Military Organization, Combat Power and Organizational Effectiveness  ,p414]
So what is there to discuss? I haven’t even mentioned the Allied domination of the air and the sea. There is no way that the German forces could have defeated the invasion.
Now another argument is that if the Germans hadn’t been deceived by Allied deception plans they would have concentrated their forces in Normandy and won the battle. I don’t understand that scenario. If the Germans concentrated all their forces in one place, before the invasion, the Allies would attack in another.
A smarter version of this is that the Germans could have won if they had quickly moved all their forces to Normandy, especially their mighty reserve held in the 15th Army area in anticipation of the real invasion. This ‘’reserve’’ was supposedly not used thanks to a hugely successful deception campaign. A detailed look into this affair requires a separate essay so here i will just briefly mention some facts:
All these mythical reserve forces disappear if one looks at the actual German divisions in the area. Out of the four operational mobile divisions in the West (21Pz ,12 SS , 2nd Pz , Pz Lehr) three were close to Normandy and only one near Calais ( 2nd Pz) . That unit was also ordered to Normandy on 9 June ’44.
The Flak Korps was a mobile unit with powerful armament that had four regiments. Three were in the Somme Estuary and one in Normandy. On 6 June the other three were also ordered to Normandy.
Obviously the Germans were tricked by the Allies to hold their forces back...
The mighty reserve that would have allegedly thrown the Allies to the sea was actually made of the divisions behind the northern coast of France. These were the 84, 85,326,331 and 182 divisions. The last two were not operational as they were refitting /reforming. The rest had 28,363 men. That’s not the end of the argument as the other units of 15th Army could theoretically contribute mobile groups to Normandy but I’ve never seen anyone even try to calculate if/how that could have happened. My advice to people who think that the allies won through deception is buy these books:  Normandy 1944 , D-day deception  .
Another argument is that the Germans had a million troops in the West and the Allies only landed 150.000 in Normandy so they should have won. However the total strength of the German forces on an entire continent has no meaning when we look at a specific area. Unfortunately the Germans had not yet discovered Star Trek type teleporters so they would have to find a way to move their forces from one area to the other. The only way was by foot, by truck and by rail. Military units can move simple soldiers by foot but their heavy equipment cannot move itself .German units in the West were woefully short of trucks so that option was limited ,[Source:Feeding Mars: The Role of Logistics in the German Defeat in Normandy, 1944].And for some reason the Allies thought it would be a good idea to bomb the French rail network. Strange people those Allies...
So where am i getting at? There’s no point in discussing what-if scenarios in cases when the disparity of forces is too great. The Allies won thanks to their own efforts not due to Hitler’s mistakes or Rommel’s or mystical deception plans.