So far I’ve looked into the German exploitation of  Polish diplomatic and resistance movement codes.

Another type of Polish code is mentioned by Wilhelm Flicke, War Secrets in the Ether p 295 :

Everything that the ‘’big fry’’ ( ie the governments of Great Britain ,U.S.A. ,Soviet Union etc ) strove to keep secret , these ‘’little fry’’ diligently tattled. It was fun to read their messages. Poland and some of the Balkan governments were the worst. An especially fruitful source was opened for the German in June 1943 by the solution of the system used for Polish military attaché traffic between London and Bern .The ‘’results’’ were outstanding!


Searching through  ‘’European Axis Signals Intelligence’’ i uncovered this snippet of information :
From EASI vol2 p81 :


d. The Polish government in London used an additive super-enciphered code for Military Attaché messages, which was read regularly by the Signal Intelligence Agency of the Supreme Command Armed Forces (OKW/Chi) until about 1943 when the Poles changed their methods of obtaining the additives. The Poles had introduced their version of the British "S.S. Frame," at the suggestion of the British Government; their stencils had from 28 to 40 randomly placed apertures, rather than 100 as in the British version. The German cryptanalysts, having the Polish code book from their previous solutions, were able, with it and with depths obtained by I.B.M. searches for repeats, to reconstruct additives, discover the irregular positions of the stencil apertures, and reconstruct the stencils, and read the messages.
The person who was responsible for this success at OKW/Chi was the mathematician Ernst Witt. According to TICOM report DF-176 ‘Answers written by professor doctor Wolfgang Franz to questions of ASA Europe’, p11


‘The most successful work along with that on the Am10 was that of professor Witt, who very skillfully solved a cipher of the Polish Government in Exile in London. This was a large complicated grille which was laid over a large number sheet. Several such grilles were constructed and messages were read currently. Photographic aids were used in the process.’


The Polish desk had twenty people and was one of the largest language desks. It was headed by a civil servant named Berndt. The main success of OKW/Chi in the Polish field was attained against an enciphered four-figure code used by the London Government in Exile. This system vas first attacked and solved by Huettenhain's research section toward the end of 1942 or the beginning of 1943. It was worked on continually and changes in the system were followed. Weber mentions having worked on the material in the spring of 1944.Kettler in his report of spring '44 mentions the solution of a Polish cipher as one of the outstanding cryptanalytic achievements of his organization. This cipher was probably one of the variations in the system under consideration. By 1945, twelve different stencils and a large number of enciphering tables had been recovered. In the attack on the system, Huettenhain's people used a specially developed cryptanalytic device called the Witzkiste ("Brainbox") and also ordinary IBM machinery. The system was referred to by some informants as "Military Attaché”, by others as "Diplomatic".
Also from I-124 ‘’Interrogation Report on Dr. Werner Weber of OKW/Chi’’ ,p3 :


Spring 1944 - Worked on Polish Diplomatic Traffic. Traffic passed in five figure groups. Four figure code enciphered by additives selected from any one of three tables. Each table made up of 2700 random one-digit figures - 90 across and 30 down. Code clerk could start at any place on any one of three tables. Four figure key group at beginning and a related control group at the end would govern table used position additive started. Traffic was being regularly read.
So was the stencil system diplomatic or military ?


Part of the puzzle can be solved by looking at report HW 40/222 ‘’ Poland: reports and correspondence relating to the security of Polish communications’’ (found in the British archives)  which mentions the Polish decodes found in the captured OKW/Chi archives : 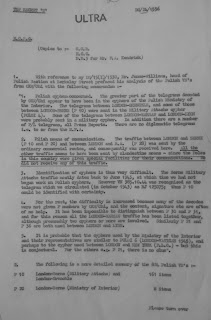 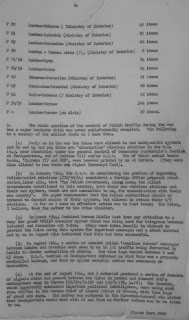 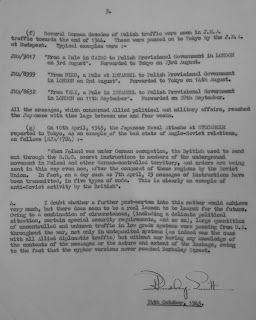 According to this report the decodes belong to three main categories:

The resistance movement code was first solved by the Army Agency OKH/GdNA.


So this would mean that the system solved at OKW/Chi was the one used in diplomatic links by the Polish Ministry of the Interior and for military attaché traffic.


Why was this so important that Flicke calls the results outstanding? Something that most people don’t know is that during the war the Polish secret service run a large number of agent networks throughout occupied Europe, both East and West.
In that capacity the Poles acted as the eyes and ears of the Allies. Bern was a hotspot for agent activity and the military attaché there would act as a controlling station between London and the European agent networks.By gaining access to the military attaché messages the Germans could keep a close eye on the anti-German activities of the Polish agents.


According to Flicke p258 one of the most damaging agent cases concerned the network of captain Choynacki who collaborated with the office of the Polish military attaché in Berne.Messages of that network were deciphered by the Germans (almost certainly the system solved in June 1943) and revealed that the person who supplied them with information was in ‘’Hitler’s  immediate vicinity’’ .Also that this person or persons knew the content of diplomatic and military messages deciphered by the German codebreaking agencies.
More information on this affair is available from ‘’ MI6: The History of the Secret Intelligence Service 1909-1949'' by Keith Jeffery.In chapter 15 p509 he mentions Major Szczesny Choynacki Polish deputy consul in Berne whose network included a highly placed agent ‘’Knopf’’.This person supplied information from February 1942 to April 1943, mainly on the Russian campaign.However as the radio traffic of the Choynacki group was decoded in summer 1943 the network was dismantled  by the Germans.


Who was ‘’Knopf’’ ? He remains a mystery but thanks to article  ‘’Penetrating Hitler's High Command: Anglo-Polish HUMINT, 1939-1945’’ by P.R.J. Winter, War In History 2011 we have some knowledge of the information he provided to the Allies and how they assessed his performance.
Was Knopf a superspy as Flicke makes him out to be ? He did provide important information on many military operations especially the planning of the Summer 1942 offensive in the East and details on Rommel’s health.However some of his mistakes made the British distrust him as a source : ‘’ Yet, in a summary of this intelligence, MI14 admitted that after scruti­nizing and cross-referencing it with other available sources it had come to the conclusion that the information was ‘valueless’ and had probably been ‘planted’ by the Germans’’.Despite this lapse the Brits continued to value his reports : ‘’When KNOPF is reporting from his usual contacts he is more often sound than not. His infor­mation cannot be accepted without some confirmation, but when it is clear and factual and is in line with our own views or with information from other sources, a high degree of confidence can be placed in it’’.


Who was ‘’Knopf’’? Why did he betray his country ? Did he manage to avoid arrest or did the SD and Gestapo uncover him ? These questions remain…Still thanks to cryptanalysis a dangerous spy network was uncovered.
From the information presented so far it’s obvious that the solution of Polish codes during WWII provided the German side with invaluable information thanks to the position of Poland as a major Ally of the West.


It is also a reminder that a country with secure codes (Britain in the period 1943-45) needs to keep a watchful eye on the codes of its close allies to ensure that it’s not harmed by their insecurity!