The story so far :

I’ve written about the TICOM team that found a German army intercept unit in Rosenheim in May 1945.That unit belonged to the Signal Intelligence Agency of the Army High Command – OKH/GdNA Group VI. The German team plus the equipment they used to intercept Soviet communications , were sent to Bletchley Park and put to use by the Allies.


Based on the information at hand I speculated that the German unit was made up of the Karrenberg team (Karrenberg,Erdmann,Grubler,Hempel,Schmitz,Suschhowk).This turned out to be correct .
I also speculated that some of the traffic that they intercepted would be plaintext or encoded with hand ciphers .If it was only machine cipher then they would not be able to read it and it didn’t make sense to waste manpower on simply intercepting traffic that could not be exploited. That’s simply not the way the Germans did things.Again I was proven correct.
This time I’ve been lucky enough to uncover some recently declassified files that shed more light into this affair.
What was this equipment called ? What agencies used it? Who built it? What kind of traffic was intercepted and what information did it yield? Let’s take a look.
According to TICOM I-58  p7  ‘’ Interrogation of Dr. Otto Buggisch of OKW/Chi’’  the Army Ordnance, Development and Testing Group, Signal Branch – Wa Pruef 7  had a section Group IV (Wa Pruef 7/IV) that developed radio Intercept, direction finding and ciphony deciphering equipment.
His own work dealt with ciphony and he was assigned to Group IV E but he had some knowledge of the other departments.
The unit that dealt with Soviet Baudot traffic was Group IV C  under Bau Rat Kierkhoff.The name for the Soviet 3 and 9 channel transmissions and the devices to intercept them were A3 and A9 respectively. One of the machines captured at Rosenheim was the nine channel version.
Buggisch in TICOM I-64 ‘’Answers by WM Buggisch of OKW/Chi to questions sent by TICOM’’ p4 gives more information on Group IV C : ‘’ there were about 5-6 engineers , 7-8 other men  and 60 odd Nachrichtenhelferinnen in the section.The bulk of the work was on Russian Baudot.’’
How was this traffic handled? Unfortunately the only information that B. has is the following from I-58 p8 :
‘’Further on Russian Baudot – B. says that one Dipl. Ing. Gramberg came to group IV with him from In 7/VI (Army Signal Intelligence) and was used to translate the intercepted clear text  in Russian Baudot.   ’’ 90% of it was unimportant’’.
More information concerning  Army Signal Branch  is available from ’’German Radio Intelligence’’ specifically these parts :
For intercepting enemy messages sent over radioteletype and multiplex circuits the Germans established in 1944 a special recording center which consisted of eleven special radiotelegraph intercept devices which were tied in with sixty teletypewriters. This installation was a synthesis of recent technical developments in the field of radio and of experience with high-speed telegraphy. The average daily performance varied between ten and fifteen million characters, which could be raised to fifty million by around-the-clock operation.
This special recording center furnished cryptanalysis with a large volume of reliable texts and provided complete coverage of the widely-differing types of foreign high-speed CW and multiplex traffic. These messages were solved without actually possessing enemy transmitting and receiving sets and in spite of the fact that the Russians, Americans, British, and French had highly-developed teletype systems.
…………………………………………………………………………………………………
Strategic radio intelligence directed against the Russian war production effort provided a wealth of information for the evaluation of Russia's military potential. Owing to the general dearth of long-distance telephone and teletype land circuits, radio communication assumed an especially important role in Russia not only as an instrument of military leadership but also as the medium of civilian communication in a widely decentralized economy. In keeping with its large volume, most of this Russian radio traffic was transmitted by automatic means, as explained in Appendix 7. The German Army intercepted this traffic with corresponding automatic equipment and evaluated it at the communication intelligence control center. Multiplex radioteletype links connected Moscow not only with the so-called fronts or army groups in the field, but also with the military district headquarters in Leningrad, Tiflis, Baku, Vladivostock, and in many other cities. In addition, the radio nets used for inland navigation provided an abundance of information. Although this mechanically transmitted traffic offered a higher degree of security against interception, the Russians used the same cryptosystems as in the field for sending important military messages over these circuits. The large volume of intercepted material offered better opportunities for German cryptanalysis. Strategic radio intelligence furnished information about the activation of new units in the zone of interior, industrial production reports, requests for materiel and replacements, complaints originating from and problems arising at the production centers and administrative agencies in control of the war economy. All this information was indexed at the communication intelligence control center where reports were drawn up at regular intervals on the following aspects of the Russian war production effort:
Planning and construction of new factories;
Relocation of armament plants;
Coal and iron ore production figures;
Raw material and fuel requirements for industrial plants;
Tank and gun production figures;
Transportation facilities and problems;
Railway, inland shipping, and air communications;
Agricultural production;
Food distribution and rationing measures;
Manpower, labor allocation, and other relevant matters.
Strategic radio intelligence thus made a slight dent in the Iron Curtain, which during the war was drawn even more tightly than at present, and offered some insight into the operation of the most distant Siberian production centers and the tremendous war potential of that seemingly endless expanse of land.
The experimental facility was also mentioned by Buggisch but he did not know anything more about it. 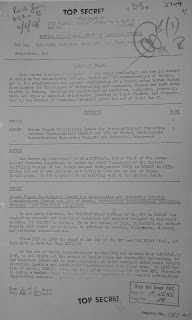 According to these reports during the 1930’s the Signal Intelligence Agency of the Supreme Command of the Armed Forces – OKW/Chi  was engaged in research and testing of equipment that intercepted Soviet T/P traffic.The Lorenz company was given the assignment to build a machine that would receive the electrical impulses and translate them into clear text.This machine was successfully built in 1936.
In 1942 the Army High Command Signal Intelligence Agency established a branch for Baudot traffic which operated in the East in Loetzen,East Prussia.That station had at its disposal 20-25 soldiers plus 80 women helpers (Nachrichtenhelferinnen).Equipment consisted of army receiving sets of ‘’Bertha’’ and ‘’Dora’’ type plus the following specialized machines :
Two nine-lined Baudot sets
Two six-lined Baudot sets


According to Roeder interception of Soviet Baudot started in the Summer of 1943 with only three sets and gradually increased.In the summer of 1944 an new type of receiver was introduced.
From SI-32 : Links monitored were : Baku-Moscow , Kharkov – Moscow , Leningrad – Moscow , Kuybyshev- Moscow ,  Kemerovo-Baku-Moscow , Alma Ata-Baku-Moscow , Irkutsk- Kuybyshev- Moscow   ,Sverdlovsk –Moscow
Baku and Kuybyshev were separate Baudot stations as well as control stations.
Local W/T traffic covered the following agencies :
1).NKRF – Peoples Commissariat on Inland Shipping matters (mostly clear text)
2).Aeroflot , (clear text and coded)
3).Railroad shipments , (machine-senders coded material)
According to Dettman Signal Intelligence HQ was able to decode most of the intercepts. In another part of report SI-32 he gives the following details :  50% of the material could not be made intelligible due to bad reception ,30-35% was of value , 10-15% consisted of private messages dealing with family matters.
Messages suitable for evaluating consisted of the following information:
1.     Announcements of various economical and industrial requirements
2.     Announcements concerning completed plans expressed in percentages
3.     Manufacturing requirements, orders and plans.
4.     Training of personnel and specialists
5.     Administrative matters
6.     Special announcements from the high military command
7.     Coded messages on the General staff and Front staff level

Report CSDIC 1717 says that on the basis of this information the Wehrwirtschaftsnachr were compiled.These bulletins gave a detailed summary of the Russian economic situation, particularly in the areas of Moscow, Baku , Rostov and included production figures and details of supply and labour situations.About 30 copies of this report were issued. Detailed card indexes of an economic nature were kept, they included names and locations of factories and personalities therein.
he reports do not necessarily agree on all the details.For example according to Dettman (chief cryptologist on Russian systems) the reception at the Loetzen facility was poor but Roeder (chief of the branch) claimed it was excellent.Roeder said that most of the traffic was Soviet 5-figure and some 5-letter traffic (plus a lot of clear text on economic matters) which was not solved but Dettman says 50% was read.Maybe they are referring to different time periods as indeed after November 1944 Soviet Army 5-figure traffic could not be solved.
Since Roeder was  considered to be unintelligent by  his interrogator (‘’it is apparent that Roeder was given responsibility because of his rank alone…’’ , ‘’he gives an impression of very mediocre ability’’)  maybe he is the one in error.
So to recap :
The Soviet Union during the 1930’s built up a modern radio teletype network for government communications. The  Supreme Command of the Armed Forces Signal Intelligence Agency - OKW/Chi had the Lorenz company build a device that reconstructed the multichannel traffic and printed the plaintext.This device was operational in 1936.
Over the years similar equipment was built to intercept the different types of multichannel traffic.During WWII  there seems to have been two distinct teletype networks divided along geographical and military-civilian lines.
West of Moscow I believe that the Russians used mostly cipher teletypes for communications between the High Command and the Army groups.East of Moscow a lot/most? of the traffic went by regular radio-teletype with security resting on the scrambling of the channels.These links carried mostly economic traffic.
The agencies involved in interception were :
1). Signal Intelligence Agency of the Supreme Command of the Armed Forces – OKW/Chi ,from 1936-39?
2). Army Ordnance, Development and Testing Group, Signal Branch Group IV C  -  Wa Pruef 7/IV C
3). Army High Command Signal Intelligence Agency Group VI  -  OKH/GdNA Group VI , from 1942-45
4).Probably  Goering's Forschungsamt .Their greatest success was against Soviet economic traffic.That would explain why in 1943 the FA attacked and solved a Soviet cipher teleprinter.
The information gathered from all these agencies allowed for an up to date picture of the Soviet war economy.
The American connection :


It’s interesting to note the date on the SI-32 report is 18 May 1948 .The ‘’German Radio Intelligence ‘’ document which also refers to the German intercept and descrambling equipment was written in 1949-50 .Why was there such an interest on the American side for these German operations? Was it simply a historical survey? Probably not.
Although the Anglo-Americans were very successful with Soviet codes  in the period 1945-48  (partly thanks to captured German material ) that success ended in October of ’48 when the Russians changed all their codesystems.
Most authors blame AFSA traitor William Weisband.However I’ve also read that security measures had began to cause problems since late 1947 .Whatever the reason for these sudden changes they had far reaching consequences for the Western codebreaking agencies. Finding themselves unable to solve Soviet codes they had to look for easier targets.The most tempting one was the internal Soviet radio-teletype network since it seems that the civilian part of it did not  use automatic encryption.
I’ve written about that effort here and here.Taking into account all the information presented so far plus the cryptic statements in the official NSA history it’s possible to assume that the Western effort was a continuation of the earlier German operation ,even using the same equipment (A9 nine-channel machine).
There are a set of postwar studies on ‘’German Intelligence on Soviet Russia called ‘’Apple Pie’’ .Apart from the one giving information on the Forschungsamt’s efforts vs Soviet economic traffic I haven’t been able to find anything else.I’m sure that those files have more details on the agencies involved and the information they gathered.I’d be grateful to anyone who can find out more.

Update: Ticom archive has information on the technical details of the German equipment plus the tests carried out in Britain.