The Air Ministry’s Research Department ( RLM/Forschungsamt) was an intelligence and codebreaking service created by Hermann Goering in 1933.

The Forschungsamt main mission was to monitor internal telephone and teletype traffic but it also attacked the codes of several countries.Pre war it provided Goering with decodes of French diplomatic traffic and transcripts of telephone conversations between politicians and diplomats ,which enabled the German leadership to outmaneuver the Anglo-French alliance during the Munich Crisis.


It seems that during the war they gained a lot of information on the economy of the Soviet Union by intercepting and decoding messages from the armaments industry.


This is the relevant information :


From TICOM I-25 ‘’ Interrogation of five members of the RLM/Forschungsamt’’ :
Q7: On what traffic did you obtain your greatest successes?

SEIFERT  : Our greatest success was obtained on Internal Russian traffic which enabled us to discover the various bottlenecks in the Russian supply organization .

PAETZEL: I did not work on them myself. They were clear text mixed with cover names.

PAETZEL: By industrial plants, foundries, plane factories, armaments, machine works and so on.


From  HW 40/186 ‘’Activities of the Reichsluftfahrtministerium Forschungsamt (Research Bureau of the Air Ministry), mostly from POW reports’’ : 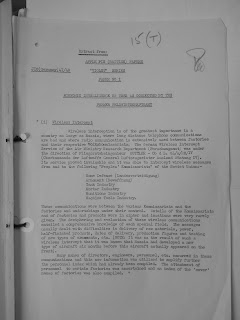 
(i) Wireless Intercept
Wireless interception is of the greatest importance in a country so large as Russia, where long distance telephone communications are bad and where radio   communication is extensively used between factories and their respective Volkskommissariats. The German Wireless Intercept Service of the Air Ministry  Research Department (Forschungsamt) was under the direction of Fliegerstabsingenieur GUTTLER — Ob d L. GL/A/Ru/IV Oberkommando der Luftwaffe General Luftzeugmeister Ausland Rastung IV .Its service proved invaluable and it was able to intercept wireless messages from and to the following "Peoples ' Kommissariats" of the Soviet Union:


These communications were between the various Kommissariats and the factories and undertakings under their control. Details of the Kommissariats and of factories and products were in cipher and locations were very rarely given. The deciphering and evaluation of these wireless communications entailed a comprehensive knowledge of each special field. The messages usually dealt with difficulties in delivery of raw materials, power, half—finished products, dates of delivery, production figures and testing of new types of armaments, etc. (NOTE: It was as the result of such a wireless intercept that it was known that Russia had developed a new type of aircraft six months before this aircraft actually appeared on the front).
Many names of directors, engineers, personnel, etc. occurred in these communications and this new information was utilized to amplify further the personnel index which had already been compiled. The attachment of personnel to certain factories was ascertained and an index of the 'cover ' names of factories was also compiled. "

Strategic radio intelligence directed against the Russian war production effort provided a wealth of information for the evaluation of Russia's military potential. Owing to the general dearth of long-distance telephone and teletype land circuits, radio communication assumed an especially important role in Russia not only as an instrument of military leadership but also as the medium of civilian communication in a widely decentralized economy. In keeping with its large volume, most of this Russian radio traffic was transmitted by automatic means, as explained in Appendix 7. The German Army intercepted this traffic with corresponding automatic equipment and evaluated it at the communication intelligence control center. Multiplex radioteletype links connected Moscow not only with the so-called fronts or army groups in the field, but also with the military district headquarters in Leningrad, Tiflis, Baku, Vladivostock, and in many other cities. In addition, the radio nets used for inland navigation provided an abundance of information. Although this mechanically transmitted traffic offered a higher degree of security against interception, the Russians used the same cryptosystems as in the field for sending important military messages over these circuits. The large volume of intercepted material offered better opportunities for German cryptanalysis. Strategic radio intelligence furnished information about the activation of new units in the zone of interior, industrial production reports, requests for materiel and replacements, complaints originating from and problems arising at the production centers and administrative agencies in control of the war economy. All this information was indexed at the communication intelligence control center where reports were drawn up at regular intervals on the following aspects of the Russian war production effort:

Strategic radio intelligence thus made a slight dent in the Iron Curtain, which during the war was drawn even more tightly than at present, and offered some insight into the operation of the most distant Siberian production centers and the tremendous war potential of that seemingly endless expanse of land.


It may be the case that the multichannel radio teletype traffic was the source of all or some of the Forschungsamt intercepts.In that case there would be another aspect to the Russian FISH story.