The German intercept stations in Spain

In the course of WWII the German signal intelligence agencies intercepted radio traffic from several fixed and mobile stations established throughout Europe. Some of these stations were located in neutral countries and they operated clandestinely, so as not to attract attention from the Allies.  Although these stations operated in secrecy the local governments were informed of their existence and had given their tacit approval.


The Spanish government under General Francisco Franco had close ties to Germany, as would be expected considering the support that the Nationalists had received from Germany and Italy during the Spanish Civil War of 1936-39. Without support from Hitler and Mussolini the Nationalists would not have been able to defeat the Republican forces. Yet despite these close ties the position of the Spanish government during WWII was to remain neutral and avoid foreign entanglements.
Even though Spain was neutral the police and the intelligence service cooperated to some extent with the German intelligence services Abwehr and Sicherheitsdienst. In the field of signals intelligence the authorities allowed the establishment of a main radio-intercept station in Madrid and smaller outstations throughout the country. These first of these stations were controlled by the German High Command’s deciphering department – OKW/Chi.


OKW/Chi was not the only German agency with radio stations in Spain. In the course of the war a clandestine naval D/F station was added to the OKW/Chi Seville facility and a Luftwaffe intercept station was established in Barcelona. Also in the latter stages of the war the main station in Madrid added a separate section for the Radio Security Service of the Armed Forces- Funkabwehr.


Information on the OKW/Chi stations is available from several sources such as ‘European Axis Signal Intelligence in World War II’ vol3 and the TICOM reports I-49 and DF-116-J. It should be noted that these sources do not always agree on all the details.
According to these reports the controlling station was established at the German consulate in Madrid (10 Ayala Street) in 1939 or 1940. The commanding officer in the period 1940-1943 was Major von Nida, followed by Lieutenant Eichner up to June 1944 and finally 1st Lieutenant Planker. The codename for the intercept organization in Spain was ‘Stuermer’.


There were outstations in the outskirts of Madrid, on a German owned cattle ranch north of Seville, in Tangiers, in Las Palmas, Tenerife and possibly in the Balearic Islands.
The stations were tasked with intercepting traffic from French, Belgian and Portuguese colonies and later traffic from North America and from the British Dominions but did not carry out any codebreaking activities. Instead the coded messages were transmitted back to Berlin.


Security measures were strict with all the personnel being told to avoid contact with the locals and even other Germans working at the embassy. The members of the group wore civilian clothes and used at the outstations radio equipment of the American Hallicrafters  company. Married men were not allowed to bring their wives to Spain and the unmarried ones were forbidden from marrying Spanish women.
Even so the work of these stations could not remain a secret forever. The Allied authorities occasionally tipped the Spanish police so it could raid these stations but thankfully the Spanish authorities always proceeded with such sluggishness that serious problems were avoided. By the time the police arrived there was nothing compromising for them to find.


In the course of the war other German agencies also established covert intercept stations in Spain.
Luftwaffe station


The signal intelligence service of the Luftwaffe operated an intercept station in Barcelona and it seems that from 1942 they had exclusive control of the entire facility. Flicke in DF-116-J says they had another station near Madrid. According to EASI vol5, p36 they mostly intercepted traffic of the USAAF ferry service.
B-Dienst station


The naval signal intelligence service B-Dienst (Beobachtungsdienst) operated an intercept station in the same facility in Seville that OKW/Chi was using (or in Barcelona and in the outskirts of Madrid according to DF-116-J). They focused on naval traffic from the Mediterranean and the Atlantic.
Funkabwehr station


The organizations tasked with monitoring the radio transmissions of illicit operators and spy groups were the Radio Defence Corps of the Armed Forces High Command – OKW Funkabwehr and the similar department of the regular police – Ordnungspolizei. Both agencies operated in occupied Europe but they were assigned different areas.
In late 1942 or early 1943 a special OKW Funkabwehr section was established at the Madrid intercept station. This unit conducted direction finding operations for the radio transmitters of Allied and Spanish Republican spy groups. It seems that they also had a small number of civilian vehicles equipped with mobile D/F devices. According to the study HW 34/2 ‘The Funkabwehr’, p21-22 the Spanish authorities not only allowed the Germans to set up this station but cooperated closely with them in the field of counterintelligence against foreign spies. 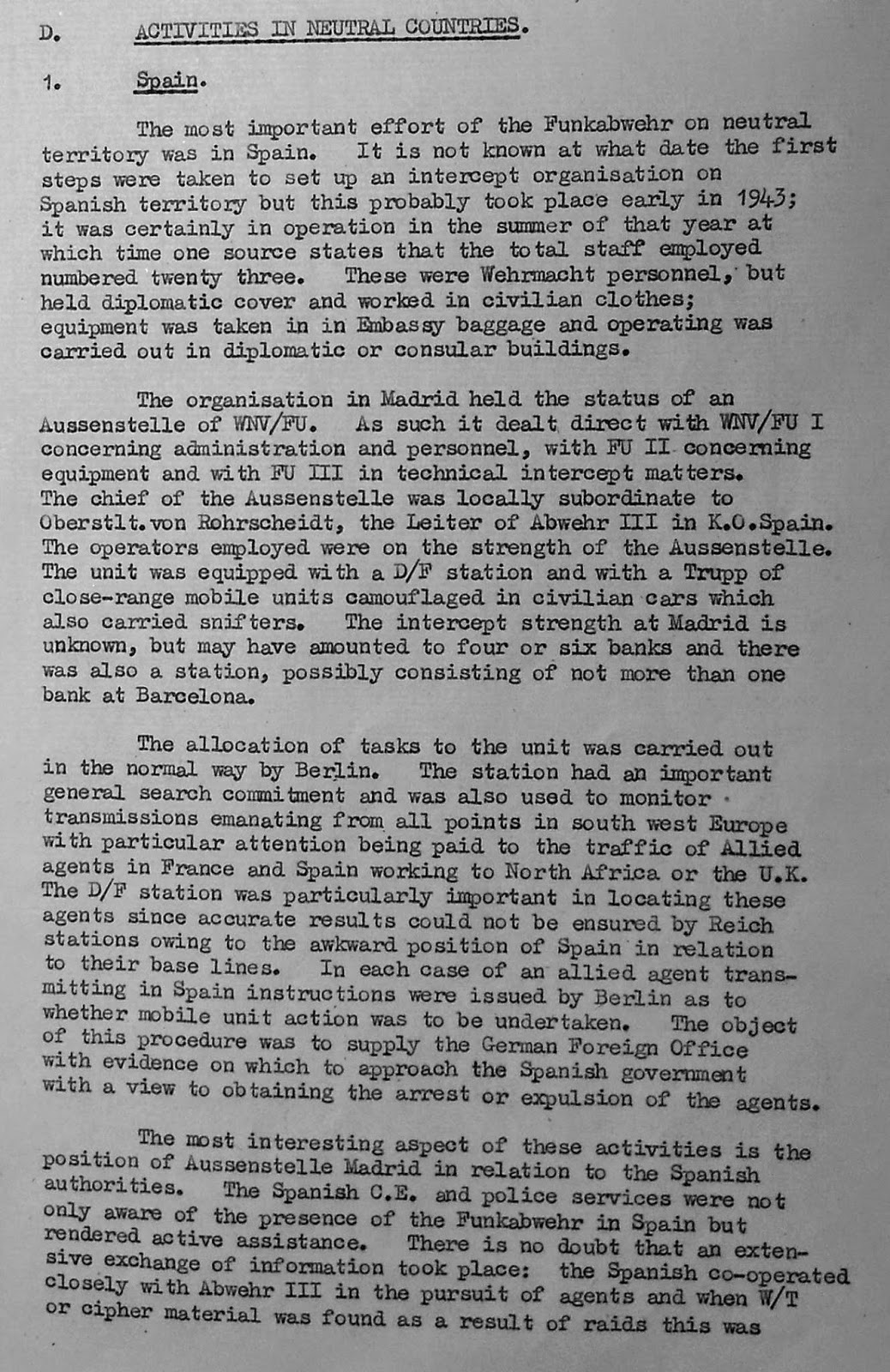 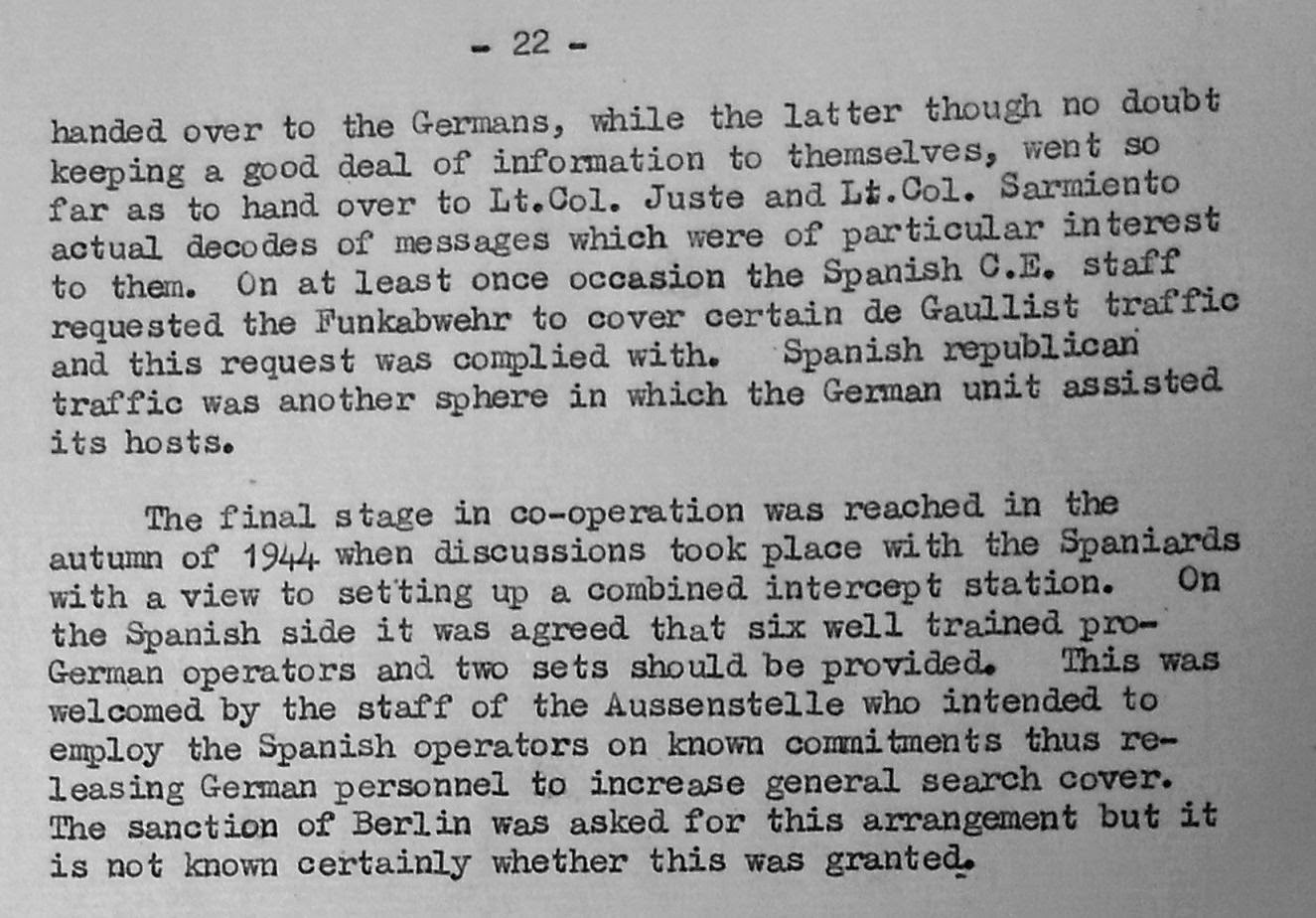 It was only natural that the Spanish authorities would be worried about Allied spy groups and even more so about the activities of the surviving Republican resistance networks. The civil war had ended only a few years earlier and the supporters of the Republican government could still organize a movement against the regime, especially if they had support from the Allies.


Lieutenant colonel Mettig, who was second in command of OKW/Chi in the period 1943-45 said in TICOM report I-115, p7 that the Funkabwehr station assisted the Spanish General Staff in counterintelligence activities and had good results with traffic from Southern France. 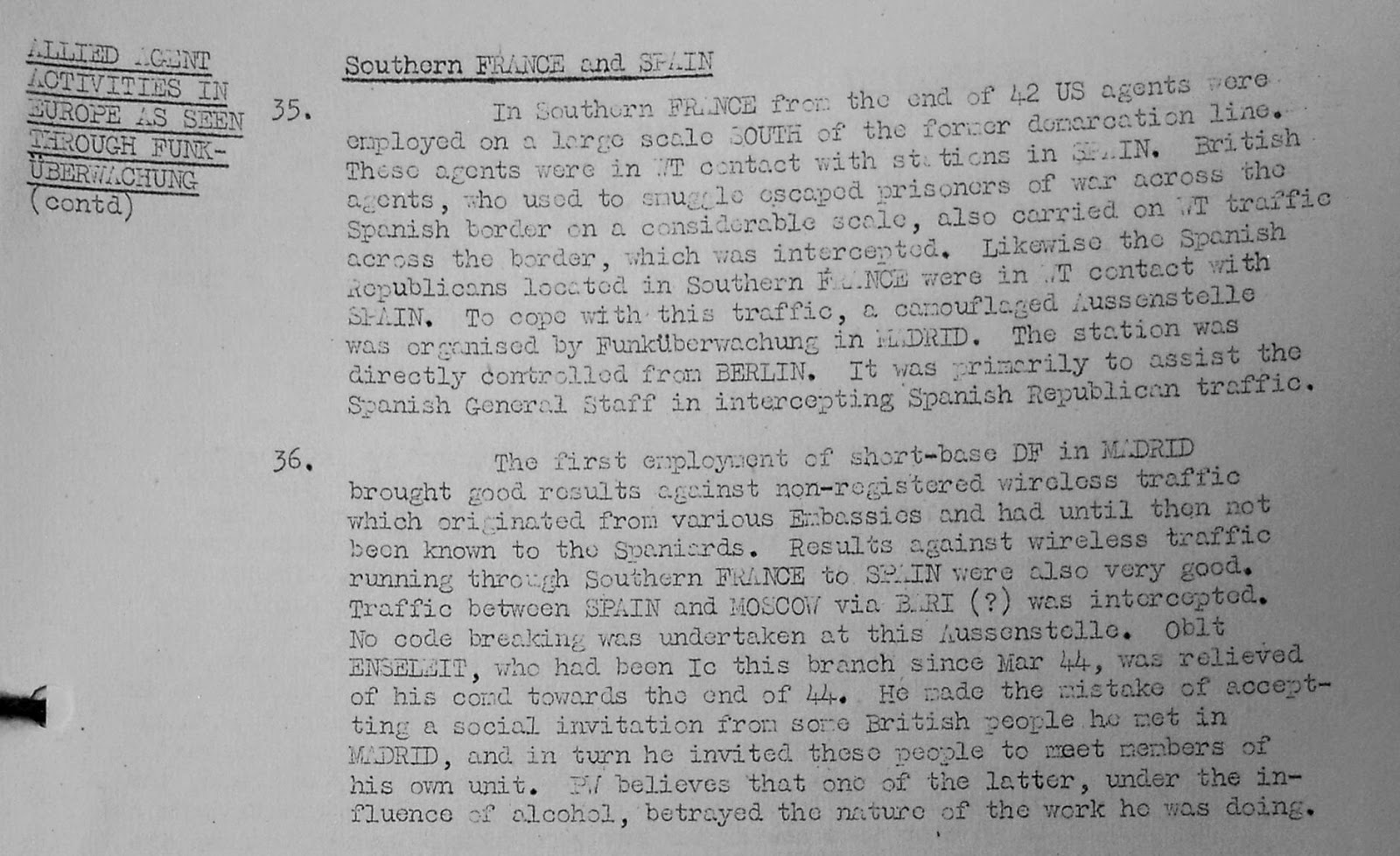 The intercept organization closes down


In the course of the war new stations were activated and the Spanish authorities obviously benefited from the German activities, especially in the field of counterintelligence. However as Germany was pushed back by the Allies it was obvious that the war would end with an Allied victory. This influenced the decisions of the Spanish government and in 1944 the Seville, Tangiers and Barcelona stations were closed down. At the end only the Madrid stations remained and they were closed down in 1945, with their equipment turned over to the Spanish authorities and the personnel being repatriated in 1946.
Conclusion


The German signal intelligence agencies operated several clandestine radio-intercept stations in neutral countries during WWII. The close relations between Nazi Germany and Nationalist Spain ensured that the authorities would turn a blind eye on the German intercept activities, especially since some of their results were shared with the Spanish intelligence service.
These stations were valuable to the Germans since they had better reception of local radio traffic from Southern Europe and North Africa. However as the tide of war turned against Germany the Spanish government was forced to follow a policy of ‘strict’ neutrality and most of the stations were closed down.


Unfortunately there is limited information available on the performance and setup of these stations in Spain. It is up to Spanish researchers and historians to find more information on this subject.