Signals intelligence and codebreaking played an important role in WWII. British and American codebreakers solved many important Axis crypto systems, such as the German Enigma machine and the Japanese Navy’s code JN25.


The solution of the German military’s plugboard Enigma was mostly carried out at Bletchley Park with Hut 6 attacking Army and Airforce ‘keys’, while Hut 8 worked on the naval traffic. During the Battle of the Atlantic the German U-boats relied mostly on the Enigma for their communications with U-boat Command, so the solution of these messages was a top priority for the Allied codebreakers.
Unfortunately the fact that the Navy used stricter procedures than the Army and Airforce plus their introduction of a separate 4-rotor Enigma machine in 1942 meant that in the period March 1941- September ‘43 the successes of Bletchley Park were spasmodic and suffered from time lag. Things changed in September since the new 4-rotor ‘Bombes’ built by the Americans were introduced and they could solve the Enigma settings reliably and in a timely manner (at least until the introduction of individual Enigma keys for U-boats in late 1944).


According to several books and articles the Germans never suspected that their codes were being read and they thought that the Enigma was unbreakable. The reality was a slightly more complex than that as can be seen from the numerous security measures they implemented during the war. Would they have taken so many precautions if they considered Enigma unbreakable?
Since the Enigma was used in huge numbers it was accepted that during the war both cipher machines and valid keylists had fallen into Allied hands. Thus current traffic could be compromised but only until new settings were introduced.


Another question is whether the Germans considered the Enigma to be vulnerable to cryptanalysis. After all it wasn’t every day that Enigma machines and keylists would fall into enemy hands. Here the story diverges since the different codebreaking departments in the Army (Inspectorate 7/VI), Navy (B-Dienst), Airforce (Chi Stelle) and Armed Forces High Command (OKW/Chi) had different opinions on the matter. Unfortunately we don’t know the full story of their security investigations as the relevant files have not been studied in detail but it is clear that they constantly researched ways of solving the Enigma.
In this area the Army codebreakers proved more suspicious than their counterparts in other departments and they always worried about the possibility of solution of the machine by the enemy. During the war they not only studied the Enigma but also interrogated Polish personnel regarding their solution of the prewar Enigma, known to the Germans as case ‘Wicher’.


The analysts of the naval cipher security department on the other hand seems to have shown a lack of imagination when it came to researching the Enigma. For some reason they constantly downplayed the possibility of cryptanalytic solution and attributed enemy successes to captured cipher material.
This can be seen from one of their reports found in NARA-RG 457- Entry 9032- box 1279 – NR 3775 ‘German Navy U-boat logs’. In the summer of 1943 the military intelligence service Abwehr learned from a Swiss-American working in the US Department of the Navy that the operational orders to U-boats were decoded by the Allies and all messages read. 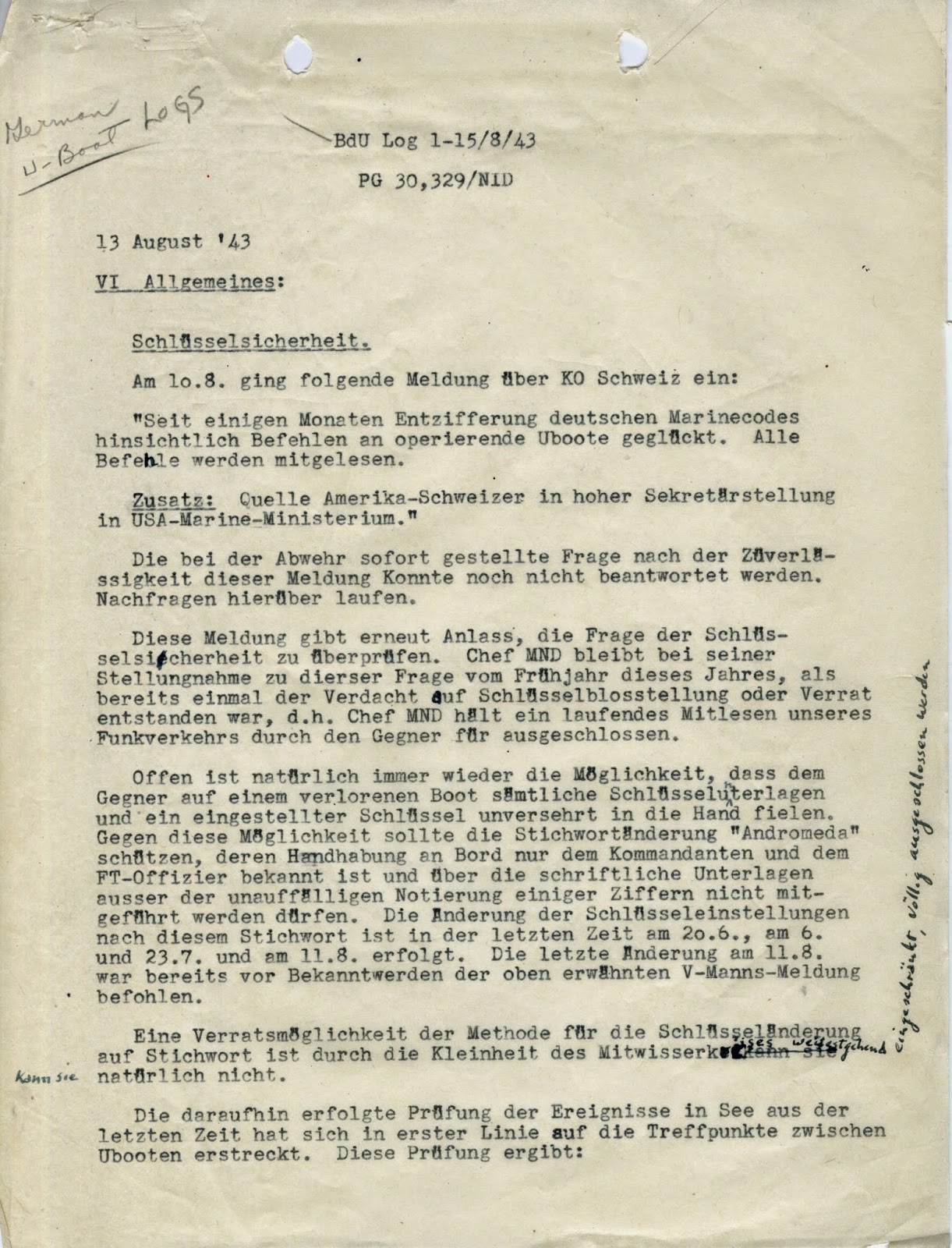 According to google translate:


At 10.8. received the following message via KO Switzerland :
‘‘For several months, deciphering German naval codes with regard to operating Uboat commands succeeded. All commands are read.


It is not clear if this person was an Abwehr agent or someone who revealed this information to Swiss diplomatic or intelligence authorities and they in turn shared this information with the Germans.
The response of the security department was that the continuous reading of their communications by the Allies was out of the question. There was however the possibility of losing cipher material in one of the sunken U-boats. For that reason they instituted a change of the Enigma settings using the keyword ‘Andromeda’.


The emergency key-‘Stichwort’, worked on the following system according to the study ‘Cryptographic History of Work on the German Naval Enigma’, p6:
"Stichwort".


19. The "Stichwort" was a device used when the enemy suspected that the keys had been captured, or wished to protect himself from the danger of this happening. An example will make its nature and method of use clear.
20. All holders of the machine (at the time of this example) held a sealed envelope labelled PERSEUS. An order was sent out "STICHWORTHEFEHL PERSEUS". The holders opened their envelopes and found the word DANZIG inside (the "Kennwort"). They then "applied" DANZIG to the key as follows (1) D = 4 was added to the number of each wheel in the W.O. (2) A, N, Z respectively were added to the three letters of the Ringstellung. (3) I = 9 was added to each letter in the Stecker. This change was applied to all keys until further notice.


21. Suppose for instance the key for the day had been W.O. 275, Rings. BYL, Stecker A/F, B/J, D/X.... . The modified key would then be W.O. 631, Ring. CML, Stecker J/O, K/S, M/G .... .
22. This is a security measure with some "nuisance value" but is clearly not equivalent to a new key. Given that a key has been captured (the assumption on which the Stichwort is based) then - once we have discovered what is happening - there are 8 W.O.'s and 26 sets of Stecker to try; this might certainly be tiresome but does not compare with the 336 W.O.'s and 140 million million stecker on a completely unknown key.


The naval codebreakers would change their minds regarding the theoretical solution of their 4-rotor Enigma in late 1944 when one of their analysts named Hans-Joachim Frowein showed that it could be solved on a ‘crib’ of 25 letters (suspected plaintext in the ciphertext). 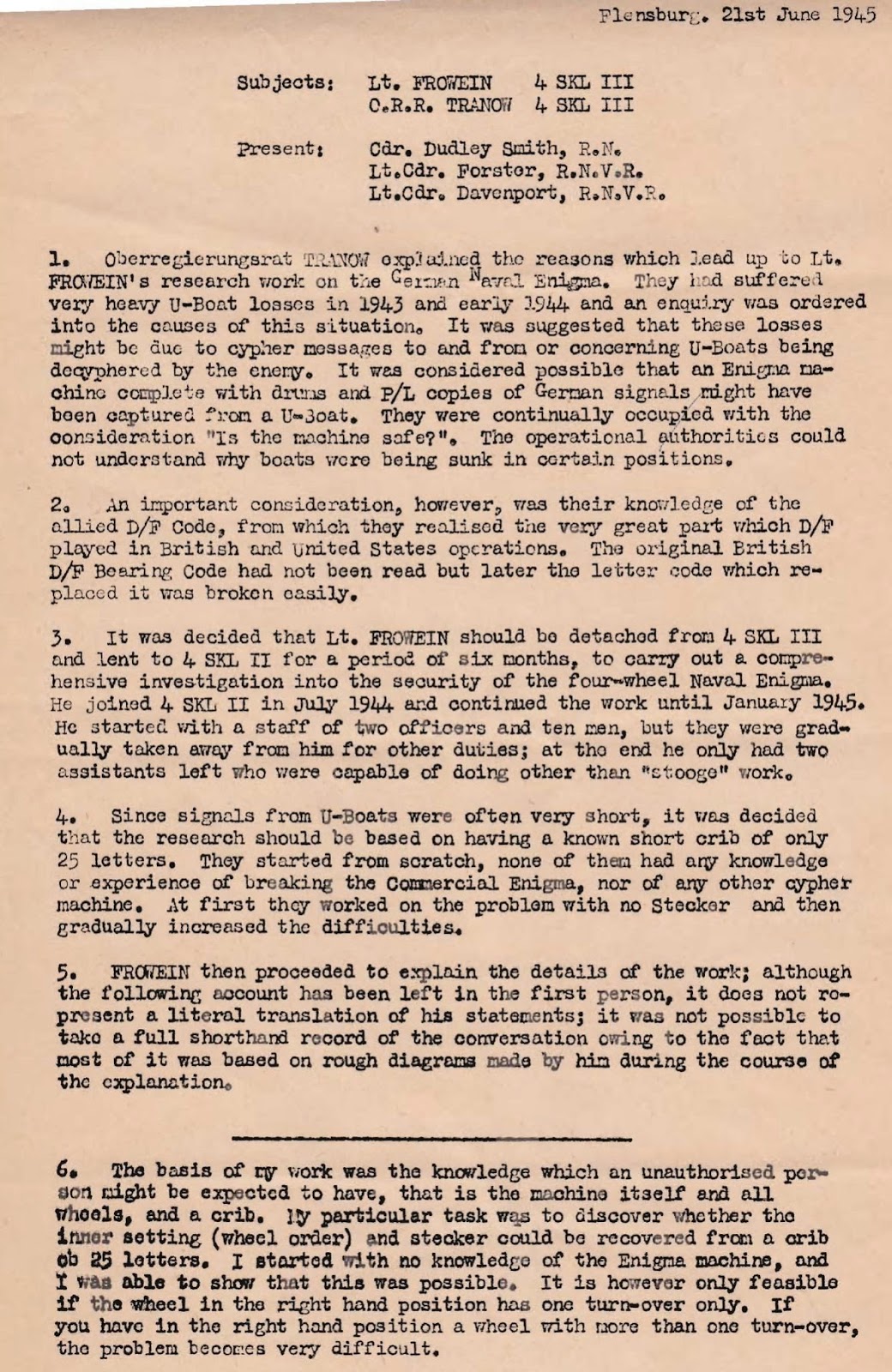 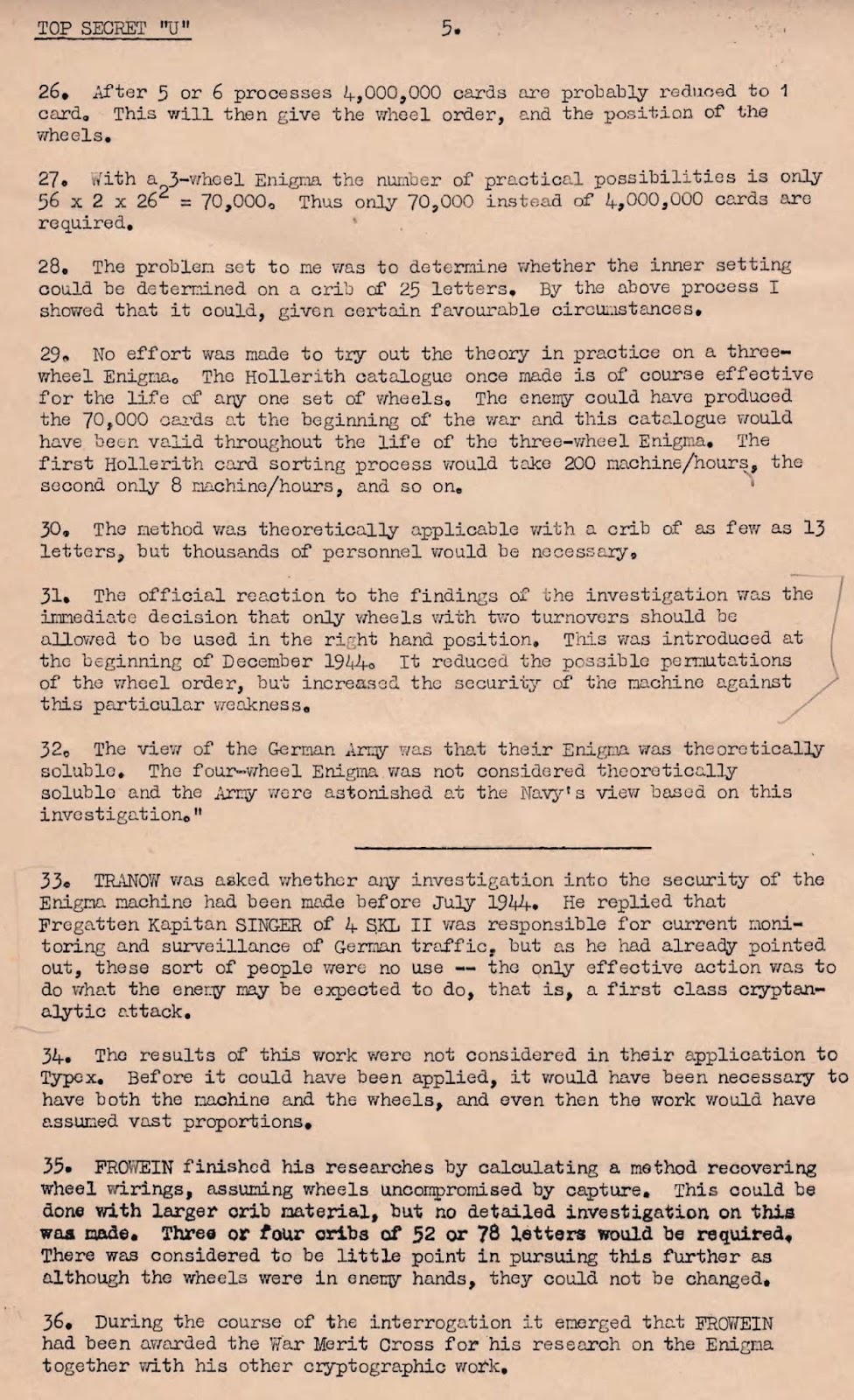 This report is TICOM I-38 and is available from Ticom Archive.

Email ThisBlogThis!Share to TwitterShare to FacebookShare to Pinterest
Labels: Abwehr, B-Dienst, Bletchley Park vs Berlin, Enigma, What If, WWII Myths