During WWII all the major participants used a number of speech privacy systems in order to protect their confidential voice communications sent over landline or radio-telephone links.


The US authorities used up to mid 1943 the Bell Labs A-3 speech scrambler, a device that utilized band-splitting and inversion. The A-3 was not secure and in the period 1941-44 the Germans were able to decode the conversations in real-time. American cryptologists knew that the A-3 was insecure and they developed the SIGSALY, a device that was a quantum leap in terms of security. However SIGSALY weighed over 50 tons and thus could only be used at prepared sites.
For field communications a speech privacy system was urgently needed but at the time it was not possible to combine a high level of crypto-security with a small and compact design. According to the postwar history of the US Army’s SSA-Signal Security Agency, in page 45, a portable speech scrambler called AN/GSQ-1 - SIGJIP was developed by Bell Telephone Laboratories in collaboration with the Signal Corps and in 1943 the responsibility for its further development was transferred to the SSA. The device was tested and its security was found wanting, however the need for such a device was so great that in 1944 several units were sent to the European, Mediterranean and South Pacific theaters.


According to TICOM reports the Germans were able to retrieve such a device from a downed Mustang fighter and although they solved the cryptologic system, in practice it was thought that finding the ‘key’ used for each mission would be difficult due to the time element.

From TICOM I-31 ‘Detailed interrogations of Dr. Hüttenhain, formerly head of research section of OKW/Chi, at Flensburg on 18-21 June 1945’

More information on the AN/GSQ-1 is available from the book ‘Information security: An elusive goal’ by George F. Jelen, pages II-17 and II-18. According to the author the AN/GSQ-1 divided the speech signal into 37 -1/2 millisecond segments and then rearranged them based on the ‘key’. In 1944-45 they were installed on P-51 reconnaissance planes operating in Europe and one of the first in service was lost over Germany. The AN/GSQ-1 was not a success and was retired after a brief period of time not only because it offered limited security but also because P-51 pilots preferred to remove the SIGJIP and in its place install a tail-warning radar. 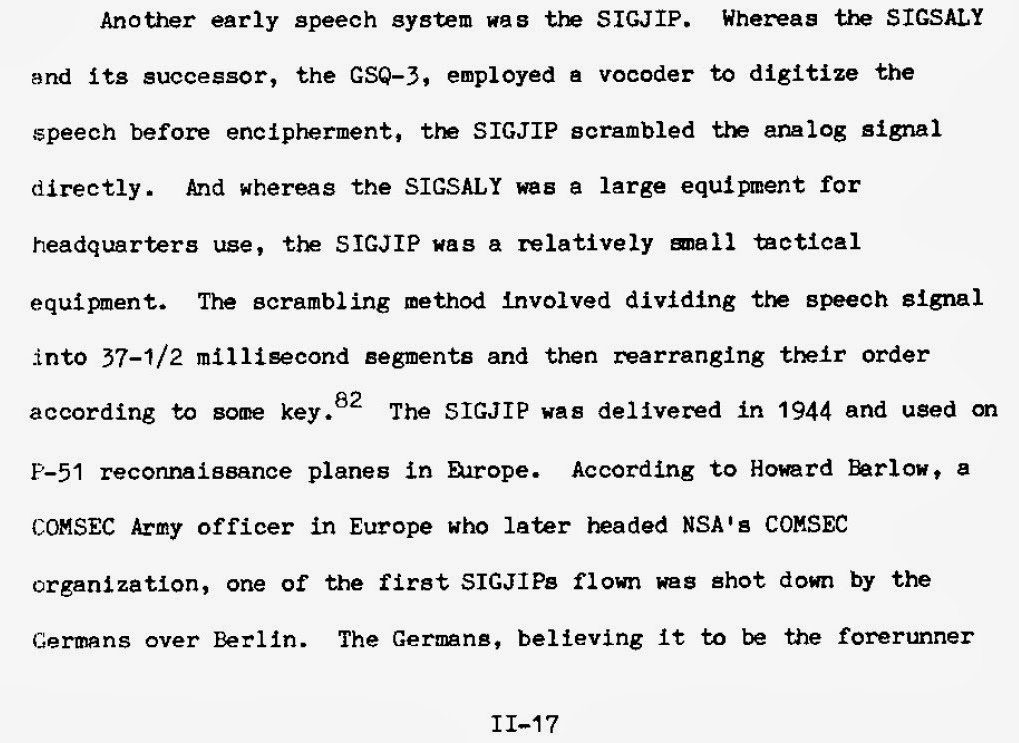