The role of signals intelligence and codebreaking in WWII has received a lot of attention from historians, especially after the release of new information in the 1970’s (ULTRA story). Information on the successes of the Axis codebreakers is not as easy to find but at least we know the main cases (Fellers code, Naval Cypher No3, etc) fairly well. However the work and successes of the Soviet codebreakers are still shrouded in secrecy.


During Soviet times there was no direct acknowledgment of cryptanalysis of Axis codes.  Soviet histories either glossed over that part of the war or referred to ‘radio-electronic combat’ which was limited to D/F, traffic analysis and jamming. After the breakup of the SU some new books and articles have been published that have a lot of information on the prewar organization and successes of the Soviet codebreaking agencies but not as much regarding their wartime efforts. Recently two new books have been published with more information on Soviet WWII codebreaking: ‘History of cryptology’ by Grebennkov Vadim Viktorovich and ‘The cryptographic front’ by Butirsky, Larin and Shankin.
I have read a chapter from the first book (with the help of google translate) that the author was kind enough to send me. There is certainly new information presented such as the solution of the codes of Germany’s allies in the Eastern Front. As for the second book, according to the table of contents it has the following chapters: 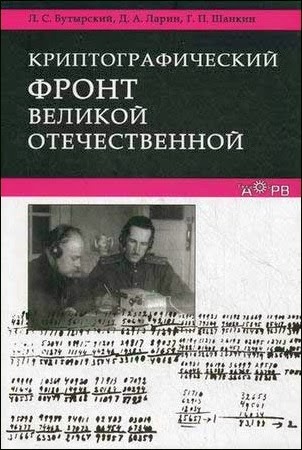 
Apparently there is information on the decryption of foreign codes but i don’t have the book and I can’t read Russian. Perhaps a Russian reader of this site can read this book and give an overview.


Some information from the same authors is presented in a series of essays published in site journal.ib-bank.ru :
Pioneers of domestic machine cryptography


Transformation in the fundamental science of cryptology
In the service of the motherland, mathematics and cryptography


Thoughts on a giant of radio engineering
These essays have very interesting information on Soviet cryptology and some of the early cipher machines in use. In ‘Transformation in the fundamental science of cryptology’ i noted these very interesting statements (through google translate) regarding codebreaking:


Meanwhile, this statement is fundamentally wrong. Many results have been achieved "clean" methods, using mathematics and computer science.
…………………………………………….


Meanwhile, many American ciphers were then opened by the combined use of cryptanalytic and engineering methods and powerful computing. However, for the opening of these ciphers such a way - the only possibility.
These statements refer to the Cryptologia article ‘Soviet comint in the Cold war’ by David Kahn, specifically the part in page 7: ‘First, the Soviet Union seems to have gained most of its communications intelligence, not from cryptanalysis, but from bugs and traitors’ and ‘High-level American cryptosystems appear not to have been solved by analysis, but some were read because traitors had sold them to the Soviet Union’.


Perhaps one day when the story of codebreaking during the Cold War is fully revealed it will be interesting to compare the NSA’s efforts with their Soviet counterparts.