In the course of WWII all the participants tried to gather secret intelligence using spies.


For example the Brits had their Secret Intelligence Service and the Special Operations Executive plus they worked together with the Polish, French and Czech intelligence services. The Germans had their Abwehr and Sicherheitsdienst. The Americans created the Office of Strategic Services etc etc
Spying was a hard business. Recruiting trustworthy individuals, training them, providing them with false identities, necessary paperwork and foreign currency was not easy. Inserting them into an enemy country was difficult with the majority being caught in a relatively short time. Even those that survived could usually only gather information of limited value.


The Germans built up large spy networks in neutral countries like Spain, Turkey, Sweden and Switzerland but they did not have similar successes in the US and the UK.
Prior to WWII they had compromised the USAAF’s most advanced bombsight but during the war their attempts to insert agents all (?) failed.


In the UK their attempts were so clumsy that the Brits not only captured the spies but in many cases convinced them to change sides and send false information to the Germans.
Does that mean that the Germans failed to get any useful information from these countries during the war? Not quite. Although the Germans didn’t have spy networks in the US and UK they were able to acquire some accurate information on Allied war production (and possibly other areas).


How could they have done so? Although they didn’t have spy nets that doesn’t mean that there weren’t other countries that did. Diplomats and businessmen of neutral countries learned a great deal by talking to Allied officials and some of this information was leaked or sold to the Germans. At the same time there was an exchange of information between Germans, Italians, Japanese and Hungarians.
For example in Sweden Karl-Heinz Kraemer, secretary of the German legation in Stockholm, was able to gather valuable information on US and UK war production mainly through his contacts in business and government circles. In 1944 the Allies considered Kraemer to be one of the most dangerous German agents and they were worried that he might compromise the security of operation ‘Overlord’.


One of Kraemer’s best sources was the Japanese military attaché in Sweden, general Makoto Onodera. In 1944-45 they regularly met and exchanged information.
General Onodera


In Europe one of the top officials of the Japanese intelligence service was the military attaché in Sweden, general Makoto Onodera. 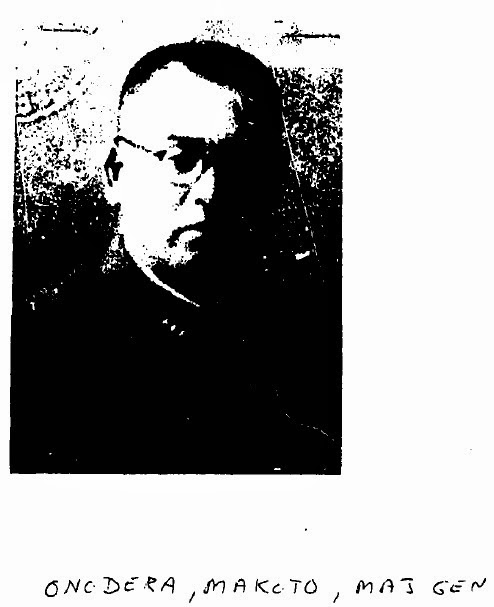 According to US reports (available from the CIA’s FOIA website) Onodera was born in September 1897 in Iwata, Japan. He came from a prominent family and pursued a military career. In the period 1912-1920 he studied first at a local cadet school, then at the central cadet school in Tokyo and finally at the Military Academy (infantry course). During his time at the academy he learned Russian. 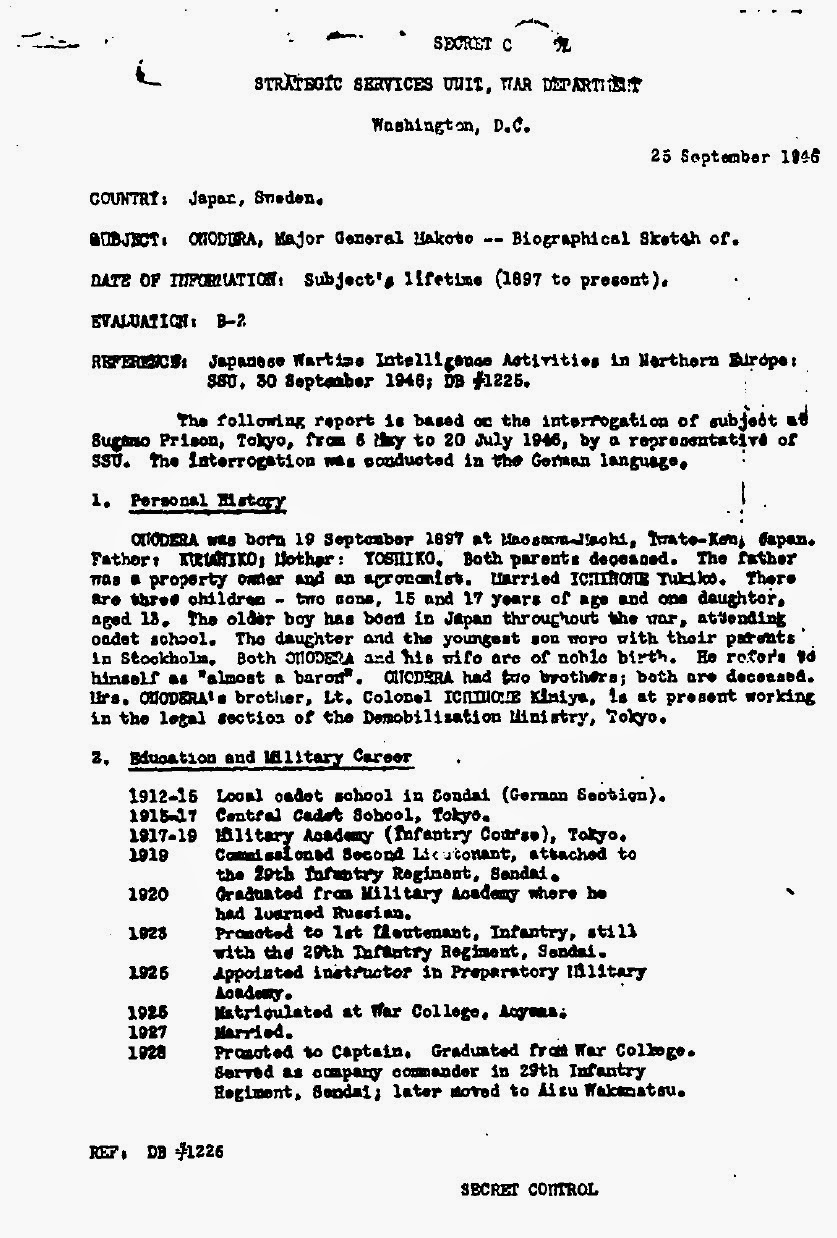 After a brief stint back to the General Staff in Tokyo in 1938 and then an assignment in the Expeditionary Force in China he was given the important position of military attaché in the Japanese embassy in Stockholm, Sweden. He officially occupied this position from February 1941 till the end of the war.

This post used to have limited value in the field of intelligence but during the war the Soviet occupation of the Baltic countries and the German occupation of Poland meant that many intelligence officials of these countries found refuge in neutral Sweden. Both the Baltics and Poland had ties to the Japanese intelligence service, especially in their anti-Soviet activities. Finding themselves without a country many of Onodera’s former acquaintances had no alternative but to make a living by selling secret intelligence.


Japanese cooperation with foreign countries in the interwar period
The Japanese approach to secret intelligence was to cooperate with other countries by offering mutually beneficial deals.


In the interwar period the Baltic countries had reasons to fear the Soviet Union and they built up spy networks to monitor that country. However their efforts were hindered because they had limited resources to invest in intelligence. The Japanese were able to take advantage of this issue by providing funds to the Baltic countries that were used for intelligence purposes. In exchange they got copies of the reports.
The Japanese also had a strong connection with Poland. They cooperated with that country not only against the Soviet Union but also in the field of cryptology. In 1923 Captain Kowalewski of the Polish Army was invited to Tokyo to teach cryptology and the Japanese sent some of their officers to Poland to train in cryptography and cryptanalysis. 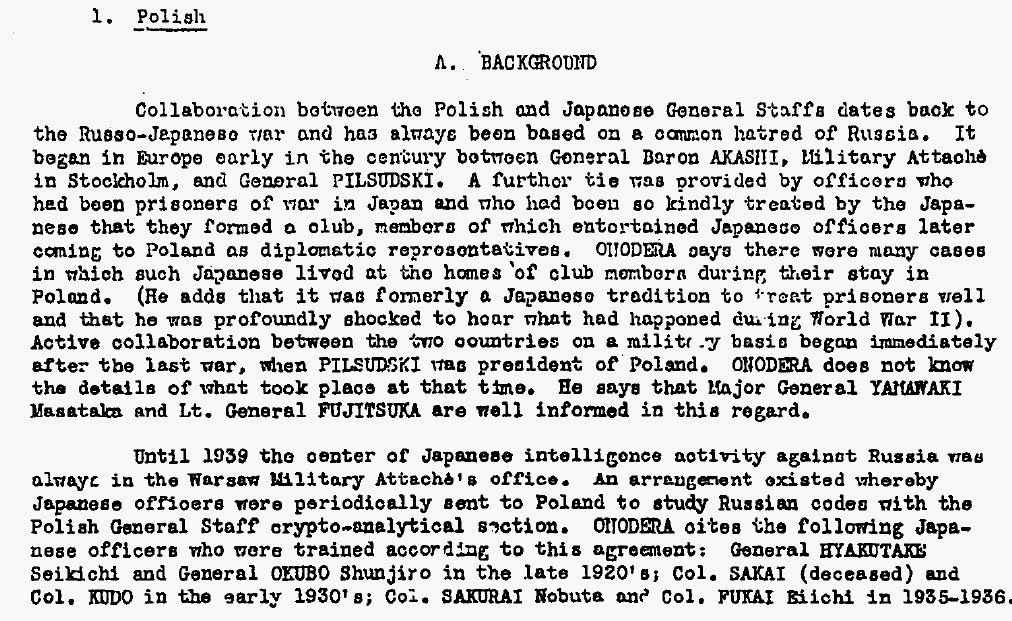 Another country with anti Soviet policy was Finland. In the 1930’s relations with Finland were strengthened in the intelligence field. The Japanese were impressed by the performance of the Finnish codebreakers, especially during the Winter War. 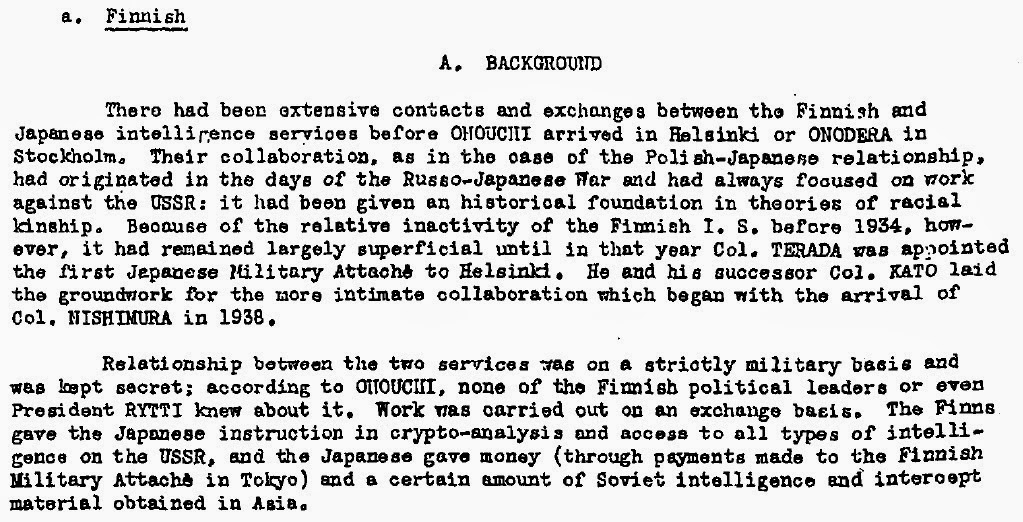 
Let’s have a quick look at each case:
Polish intelligence service


During WWII the Polish IS operated throughout Europe and scored many successes against Germany. They even had a spy in the German High Command (probably the Oberkommando des Heeres-OKH). The Japanese supported the Polish IS and in turn benefited from the information obtained but this definitely strained their relations with the German security services.

In time the Germans uncovered cases of espionage perpetrated by persons holding Manchukuo passports and they obviously realized that the Japanese were protecting the Poles. Their protests led to the Japanese scaling back their activities but the cooperation between Japan and the Polish IS was continued.

Onodera’s contact with the Polish IS was his close associate Michal Rybikowski, a former intelligence officer, whose cover name was ‘Piotr Ivanov’. Onodera protected him from the Germans and the effort paid off as he received valuable information on the German military, the Soviet Union and the fighting in the Eastern front. 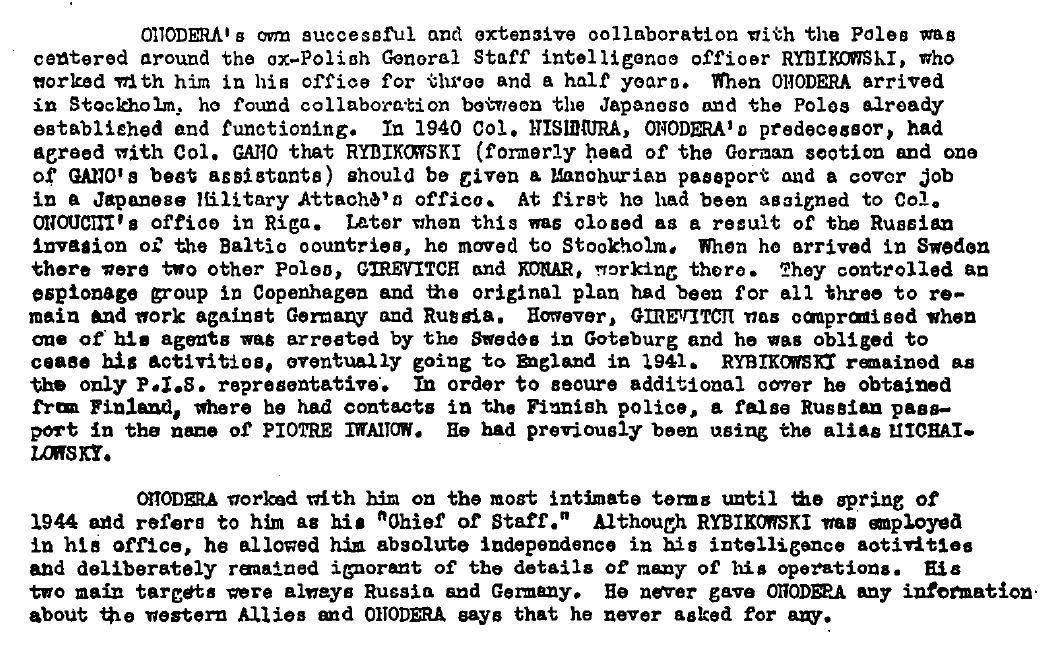 Was Onodera’s support of Rybikowski completely justified? A US report says that though him the Poles and the British were able to monitor the Japanese activities. 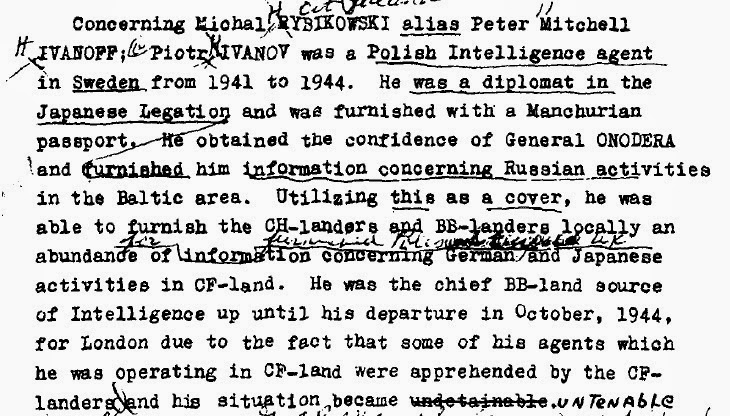 Considering the close relationship between the Japanese and the Polish IS it is possible that Rybikowski betrayed only parts of Onodera’s activities to the British.


Finland
During the war Onodera received information from the Finnish intelligence service and especially their codebreaking department. The Finnish codebreakers were able to solve several important foreign cryptosystems, including Soviet military codes and the State Departments strip cipher. The Allies learned of this arrangement when they decoded Japanese messages mentioning the solved codes.


In September 1944 Finland signed an armistice with the Soviet Union. The intelligence officials anticipated this move and fearing a Soviet take-over of the country had taken measures to relocate the radio service to Sweden. This operation was called Stella Polaris. In late September roughly 700 people, comprising members of the intelligence services and their families were transported by ship to Sweden. The Finns had come to an agreement with the Swedish intelligence service that their people would be allowed to stay and in return the Swedes would get the Finnish crypto archives and their radio equipment. Onodera did not forget his Finnish friends and he supported them with all the funds at his disposal (roughly 250.000-300.000 Swedish Kroner).

From the Finns he got the foreign codes that they had solved during the war. 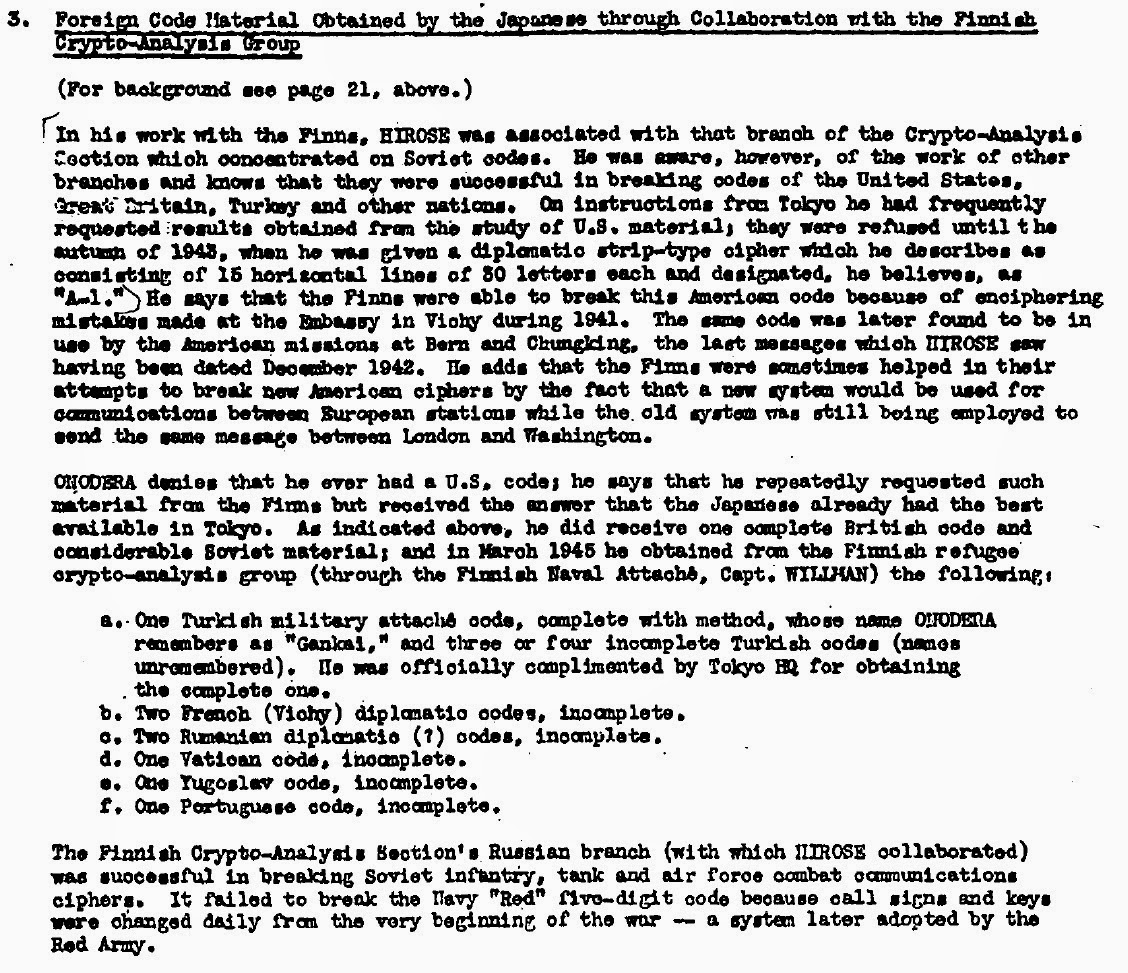 
In Sweden Onodera was able to benefit from the acquaintances he had made during his tour as military attaché to Latvia in 1936-38.
His most valued associate was colonel Maasing, chief of the intelligence service of the Estonian General Staff. Maasing directed espionage activities against the Soviet Union and in 1940, when the country was occupied by Soviet troops, he fled to Sweden. Up to 1942 he worked for the German intelligence service but in April of that year he returned to Stockholm to work for Onodera.

Maasing knew many officers in the Swedish armed forces and the national police.


In Sweden Onodera kept in contact with diplomats and military officials.  According to his interrogation report most of the time he wasn’t able to get information directly from the Swedes but had to rely on the connections of his associates Maasing and Karl-Heinz Kraemer. Maasing knew several important Swedish officials, especially in the police force from his time as director of Estonian intelligence. Kraemer on the other hand had contacts with Swedish businessmen. 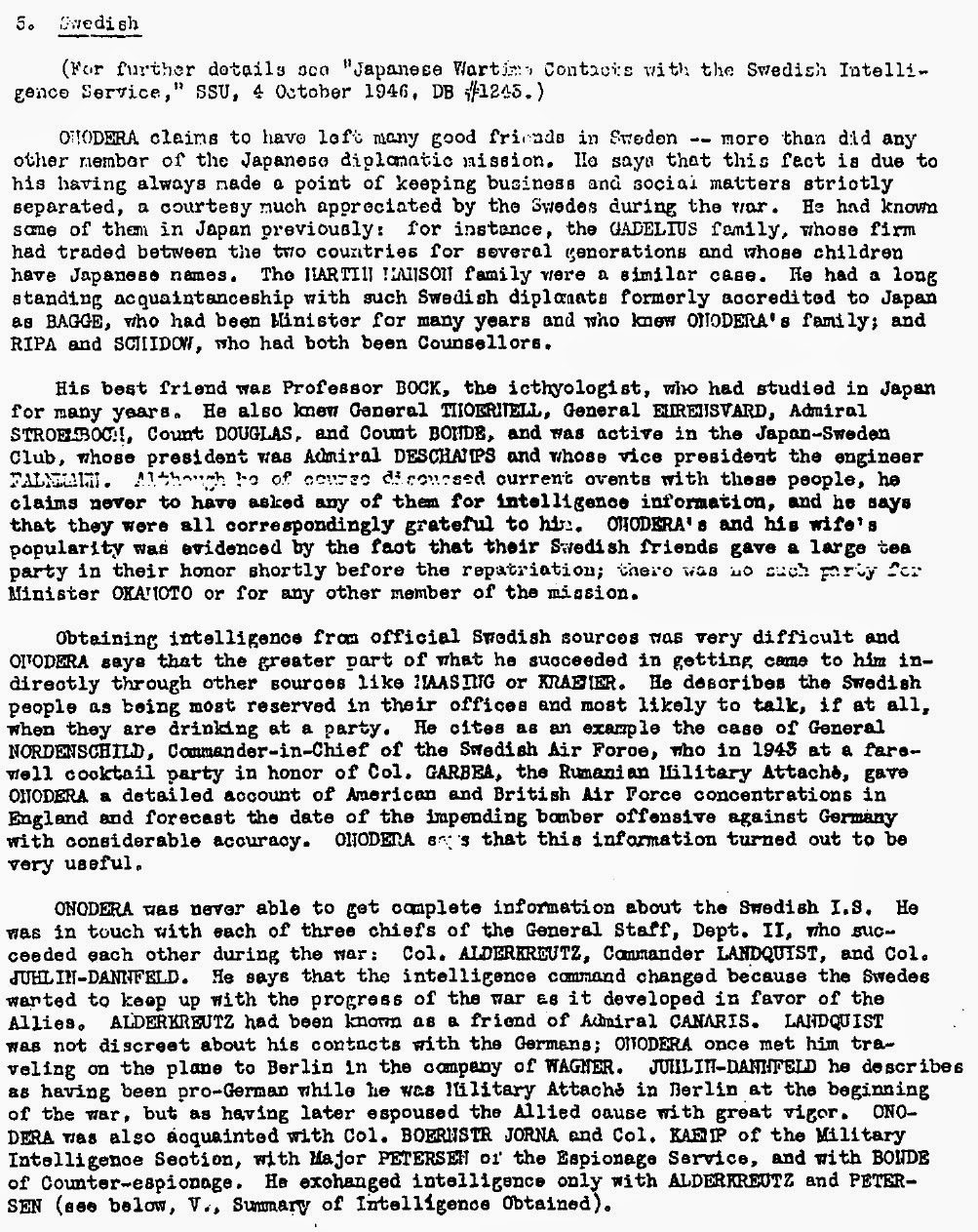 From the interrogation report it is obvious that some interesting information was acquired through Swedish officials such as major Petersen of the intelligence service.


Onodera’s relations with his German counterparts were poor, as they did not share valuable intelligence and in any case he did not consider them to have an efficient espionage service.

The exception to this rule was Karl-Heinz Kraemer, secretary of the German legation in Stockholm, whom Onodera considered to be a valuable agent. In the period 1944-45 Onodera and Kraemer exchanged information.

Hungarians
Onodera exchanged information with the Hungarian military attaché Frigyes Kobor and his assistants Vagy and Voeczkoendy, however he did not have a lot of respect for them. 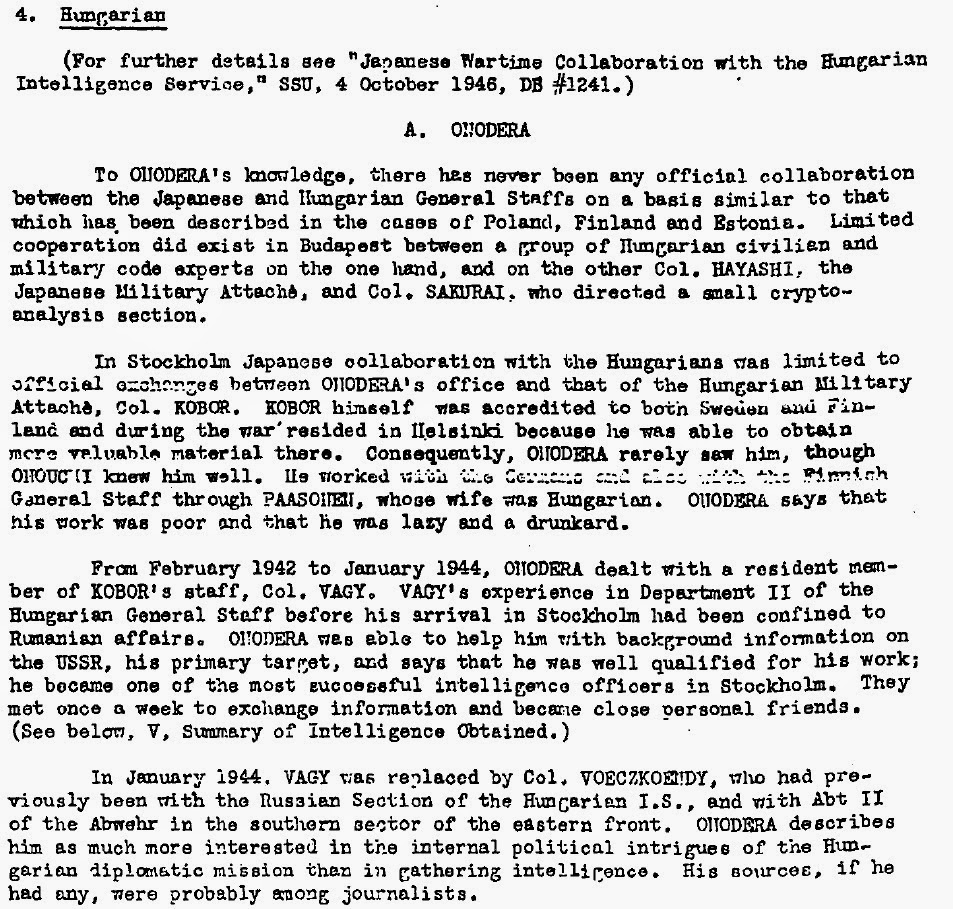 More details on the exchange of information are available from Voeczkoendy’s interrogation report CI-FIR/117 (available from fold3.com) 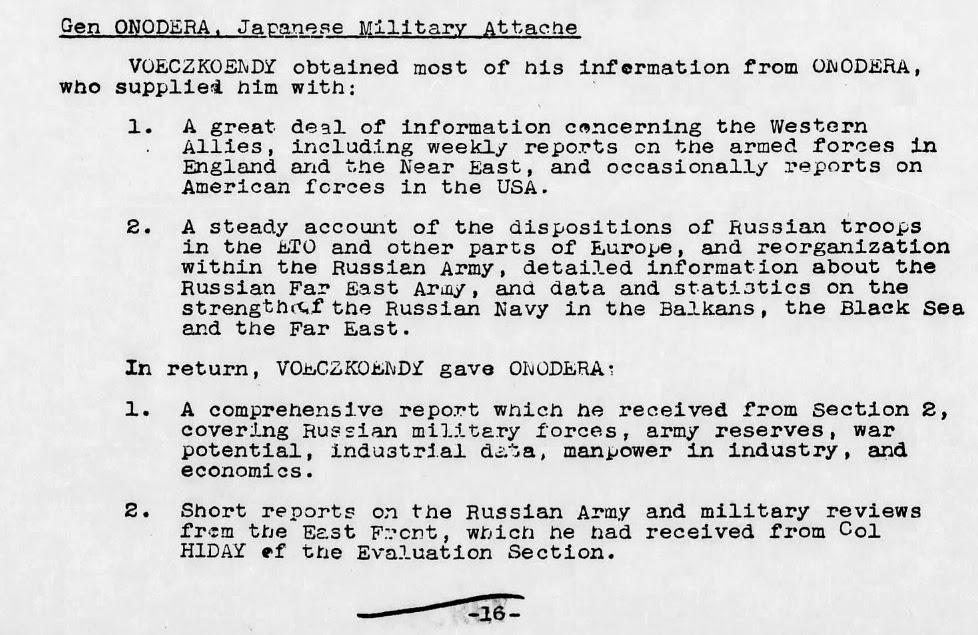