At the end of WWII the Western Allies were able to arrest and interrogate many German codebreakers. In addition the archives (or parts of them) of several German signal intelligence agencies fell into their hands.


This information is contained in the numerous TICOM (Target Intelligence Committee) reports that I have uploaded to the internet.
However is the information from the TICOM reports accurate? Or were the Germans either exaggerating or downplaying their successes?


The validity of some of the statements made in TICOM reports can be assessed by checking the archives of the agencies mentioned in them.
If a German Naval codebreaker said that they broke a specific code in a specific time period then the archives of the B-Dienst would be expected to confirm this information. Same thing for the codebreakers of other agencies of the Third Reich.


However what happens when the relevant archives are either not available or have parts missing?
Then it becomes difficult to judge the truthfulness of some of the statements made by the Germans.


Since many officials from these organizations were arrested and interrogated by the Allies one would expect that we would have a clear picture of their success against the strip cipher. Yet this is not true. On the contrary, there many gaps in our knowledge of their efforts and successes against this system.
At the Forschungsamt some work was done on the strip but apart from the fact that they solved some traffic we don’t know any more details.


At OKW/Chi an entire team worked on the strip, led by the mathematician Wolfgang Franz.  The information given by Franz who was interrogated in 1949 is limited. In his report DF-176 he said in pages 6-9:
‘Especially laborious and difficult work was connected with an American system which, judging by all indications was of great importance. This was the strip cipher system of the American diplomatic service which was subsequently solved in part.’


This system was so important that more workers were hired to work on it.
‘On the basis of gradual successes with the Am10 –that was the designation of the strip cipher system- Dr Huettenhain succeeded in securing the appointment of assistants despite vigorous opposition on the part of the administrative office and the philological sections.’


But Franz doesn’t give any details about the links that were solved or the information gained. He simply said:
‘All told, some 28 circuits were solved at the Bureau under my guidance, likewise six numerical keys-some of them only in part.’


He also downplayed his success:
‘To be sure, only a few solutions came in good time; in most cases there were lags of one to one and a half years. Since the essential principles were recognized too late and necessary personnel and aids were not available at the time.’


Would the Germans invest more manpower and even build cryptanalytic equipment in order to solve traffic that was years old? It does seem strange…
Even stranger is what Franz says in page 11:


‘At the end of the war I was on an official journey to retrieve some material which had been lent to the Foreign Office and was overtaken by American troops in Northern Germany.’
Hmm what kind of material did Dr Franz want to retrieve? Maybe it was relevant to the strip solution, maybe not, we’ll probably never know.


Erich Huettenhain, who was the chief cryptanalyst of OKW/Chi also had a leaky memory when it came to the strip cipher. In TICOM I-2 ‘Interrogation of Dr. Huettenhain and Dr. Fricke at Flenshurg,21 May 1945’, he said:
‘Q. What work was done on British and American codes and ciphers?


A. Diplomatic - most of the American strip cipher was read, strip cipher was used by the military as well as by the diplomatic.’
In TICOM I-145 ‘Report on the US strip system by Reg Rat Dr Huettenhain’ he changed his mind:


‘Only a little of the material received could be read at once. Generally it was back traffic that was read. As, however, the different sets of strips were used at different times by other stations, it was possible, in isolated cases, to read one or the other of the special traffics currently. We are of opinion that of the total material received, at the most one fifth was read, inclusive of back traffic. None was read after the beginning of 1944.’
In TICOM I-145 ‘Report on the US strip system by Reg Rat Dr Huettenhain’ he said:


‘On the basis of the cypher data received, the traffic on the one key could be read. In the course of time, as a result of compromises or partial compromises of the traffic on this key, or with the aid of other readable cypher traffic, other sets of strips were discovered by cryptanalysis. can no longer state how many different sets of strips were reconstructed; probably 10 to 20.’
But in an unpublished manuscript written in 1970 he said:


Note that the OKW/Chi activity report DF-9 for the first half of 1944, says:
‘Government codes and ciphers of 33 European and extra-European States and agents lines were worked on and deciphered. 17.792 VN were produced including 6.000 agents messages. From point of view of numbers the list was headed by Government reports of the USA, Poland and Turkey.’


‘A number of complicated recipherings, principally American (USA) and Polish, have been broken.’
This must have been a reference to the US strip cipher, in which case Huettenhain’s statements about limited success ring false.


Apart from the Forschungsamt and OKW/Chi the Pers Z department worked on the strip cipher.
The Foreign Ministry’s deciphering deparment Pers Z devoted significant resources against the US diplomatic strip cipher. A team of mathematicians, led by Professor Hans Rohrbach made extensive use of IBM/Hollerith punch card equipment in their efforts to solve the alphabet strips. Rohrbach admitted to solving the circular set 0-2 but what of other sets?


Unfortunately I don’t have Rohrbach’s TICOM report (yet) but the Cryptologia article ‘Report on the decipherment of the American strip cipher 0-2 by the German Foreign Office' summarizes his work.
Rohrbach says that systematic work on the solution of the cipher began in November 1942 but in Huettenhain’s files there is a report that says that Pers Z was working on a US diplomatic system since 1939-40… 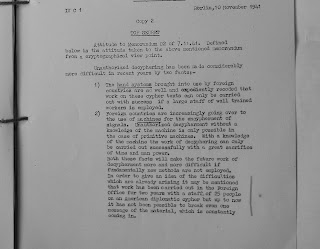 
‘As to technical means, we had at our disposal in 1942-44 a good selection of Hollerith machines. We frequently used probability and statistics theory mainly in order to decide whether or not an observed phenomenon was caused by chance or was, in fact, due to some encipherment.’
But another Pers Z cryptanalyst, Dr Schultz,  said in TICOM report I-22 ‘Interrogation of German Cryptographers of Pers Z S Department of the Auswaertiges Amt’, p16 that the greatest achievement of the mathematical research section was the solution of the 0-2 strips entirely by hand.

So what can we conclude from all these conflicting statements? Obviously we do not know the full story of the German success with the State Department’s strip cipher!
Acknowledgements: I have to thank Michael van der Muelen for sharing the TICOM report DF-176 ’Answers written by professor doctor Wolfgang Franz to questions of ASA Europe’