During WWII both the Allies and the Axis were able to capture equipment used by the other side. This equipment (tanks, planes, artillery, rifles etc) was thoroughly tested in order to ascertain its performance and weak points.


Captured Allied planes were tested by a special unit of the Luftwaffe at Rechlin airport.
One of the test pilots was Hans-Werner Lerche and in his memoirs ‘Luftwaffe Test Pilot: Flying Captured Allied Aircraft of World War 2’ he writes about the planes he tested and their operational characteristics. 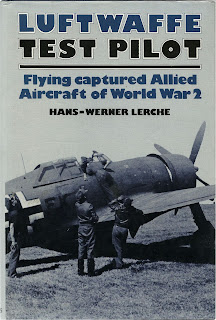 Lerche became interested in aviation at a young age, reading aviation magazines and building model planes. He wanted to learn how to fly a glider and in 1931 was accepted to a gliding training school. In the same course he met ‘a pleasant young lady… her name was Hanna Reitsch’. Lerche got his A, B and C-certificates of flying and later became a glider instructor, while at the same time studying engineering. 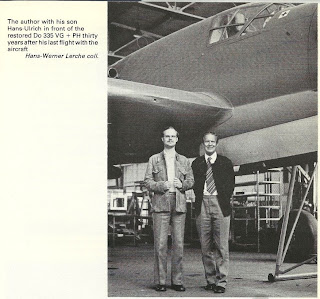 During the 1930’s he learned how to fly powered aircraft and when he was inducted for military service in the late 30’s he got himself assigned to the Luftwaffe. After passing another pilots course he was promoted to non-commisioned officer and was transferred to the ‘German aviation experimental establishment’. At the Rechlin center German and foreign planes were thoroughly tested.
Overall Lerche flew 125 different aircraft types during his career!


Each chapter of the book deals with specific Allied aircraft. The book covers the British Lancaster, Spitfire and Tempest, the US P-39, P-47, P-51 fighters and the B-17,B-24 bombers, the Soviet planes La-5, Yak-3, the German Ju 290 and Do 335 and several Italian types like the SM.82, SM.91, G.55, Cant 1018, Cant 1007, Ca 133.
For WWII aviation enthusiasts the book has very interesting information regarding the performance and peculiarities of various well known aircraft. For example:


Lancaster bomber
The Lancaster was the main 4-engine bomber of the RAF’s Bomber Command.


In August ’44 a Lancaster was test flown by the author who evaluated the flying characteristics. The plane was also used in tests of electronic equipment installed in German nightfighters.


The famous Spitfire is an icon of the RAF’s Fighter Command. During WWII it was the premier British fighter plane.
A Spitfire IIA (1.200hp engine) was tested by Lerche who considered it a dangerous opponent due to its armament and low wing loading. A negative point was that when taxiing ‘the field of vision was not as good as in the Bf 109 because of the ‘wide shoulders’ of the 12-cylinder upright-V engine’.


In October ’43 a USAAF B-17 landed intact in Denmark. The plane made a forced landing but had only superficial damage. After removing ‘dead weight’ like armor and ammunition it was possible to fly it to German territory. According to Lerche the most interesting part of the aircraft were its supercharged engines. 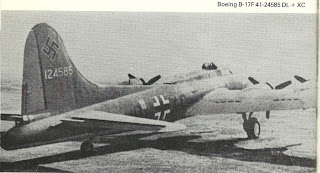 During one of the test flights the B-17 demonstrated its ability to fly home with one or more engines out of action! At roughly 9.000 feet one of the engines malfunctioned. The crew got ready to abandon the plane at the pilot’s command but this was not necessary in the end. Even with 3 engines the plane made a safe landing.
The B-17 was flown to airbases so that German pilots would familiarize themselves with this type and even mock attacks were flown.


The only negative remarks on the B-17 were that the ‘forces acting on the ailerons were relatively high’ and the rudder was very heavy.
B-24 ‘Liberator’


In spring ’43 a B-24D landed by mistake in Sicily and was then flown by an Italian crew to Rechlin so that the Germans could test it. In the fuselage it had the title ‘Blonde Bomber II’.

According to the author the B-24 ‘felt rather unstable longitudinally’ and ‘showed quite high control forces when gliding’. The nose wheel was also a weak point as it required a concrete runway and it collapsed during one of the landings at Rechlin.


Contrary to orders Lerche had to share this aircraft with a fighter ace of the nearby unit who also wanted to fly it. In the end they agreed that Lerche would fly close by in order to ensure that the plane was operational and then the ace would fly it from Caen to Cormeilles. 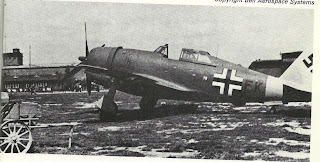 The P-47 was a very heavy plane and its performance at low level was poor at ~500km/h. However at high altitude its performance was impressive reaching roughly 640 km/h at 29.500 feet.

According to the author the P-47 was not a good plane for dogfighting or low level attacks but it was ‘excellent in higher altitudes, in diving attacks and flying at maximum boost’.


P-51 ‘Mustang’
The famous P-51 ‘Mustang’ is one of the most iconic WWII aircraft. It had extraordinary long range for a single engine aircraft and it successfully escorted US bombers in Axis controlled territory.


In June ’44 a P-51B landed at Cambrai-South airfield during the Normandy invasion. Getting so close to the front was dangerous for Lerche so everything had to be done fast. A Ju 188 fast bomber was used for transport and the P-51 was quickly set up and flown by him.

The Mustang was tested extensively and Lerche calls it a ‘truly unique aircraft’. It was very fast at all heights and the performance was very good in all aspects. At an altitude of 23.000 feet it had a speed of ~670km/h.

The negative aspects were: lack of longitudinal stability when the fuel tanks filled to a certain extent, at full throttle it stalled ‘even in a sharp turn’ and the engine required careful handling as ‘when revving up it reacted very sensitively to the correct operating temperatures and, if handled roughly, it countered with unsteady running.’


Lavochkin La-5
The Soviet Lavochkin La-5 fighter was introduced in large numbers in 1943 and it was substantially better than the previous fighter planes of the Red AF.


In September ’44 a La-FN was captured at Gross-Schimanen, East Prussia. This plane was tested and the author found it to be a dangerous opponent at low altitudes. 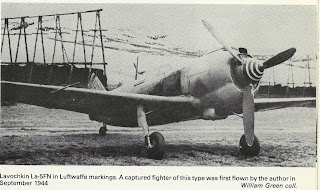 His final report said that the La-5 had noteworthy performance below 3.000m but top speed was below that of German fighters. Range was short with roughly 40min of flight at the rated power, less with supercharger engaged.
The main problems identified were that fumes from the engine entered the cockpit and the engine was excessively noisy: ‘by no means pleasant was the noisy running of the La-5 engine, which had deafened me by the evening. On later flights I always tried to remember bringing along some cotton wool to plug my ears’.


The Yak-3 was introduced in 1944 and due to its light weight had impressive performance characteristics.
In January ’45 a Yak landed intact at Gross-Schimanen airfield, the same one that Lerche had visited recently. After an inspection it was flown back to Rechlin.


The Yak-3 weighed roughly 2.500 (5.512) kg and had a power loading of 4.5 lb/hp. Speed and acceleration were very good but performance at altitude was poor.
This plane was used not only for testing but was also ordered to Oranienburg airport to take part in an exhibition for Field Marshal Goering. Lerche flew the plane there and had to stand attention during the presentation. Then Goering asked him questions on the performance of the Yak.