German disinformation operations - The 1930’s crises and the mighty Luftwaffe

In the 1930’s Hitler was able to outmaneuver the Franco-British alliance and achieve his foreign policy goals without a shot being fired. After gaining power he reintroduced military service and rebuilt the armed forces. In 1936 he remilitarized the Rhineland. In 1938 he annexed Austria and parts of Czechoslovakia and occupied the rest in 1939.


At that time Germany was in the process of rebuilding its armed forces. A new German army could not be built overnight and in the meantime France had the largest and best trained and equipped army in Europe. At sea the huge British fleet could easily blockade Germany.


How could Hitler outmaneuver his opponents when they had the upper hand militarily?


The only way for Hitler to pursue his policies was to use the Luftwaffe as a propaganda weapon in order to intimidate his opponents.


In this effort he was greatly assisted by the popular belief in the superiority of airpower and the ability of the bomber to annihilate population centers.


The unstoppable bombers and the knock-out blow


In the inter-war period world opinion was fascinated by the progress of aviation. Military officers disgusted by the senseless slaughter of the First World War formulated new theories of war.


Instead of having millions slaughter each other in the trenches countries could invest in powerful bomber forces that would quickly destroy the enemy’s population centers and industrial facilities.


The ‘prophets’ of this new strategic bombing theory were Billy Mitchell in the USA, Giulio Douhet in Italy and Hugh Trenchard in the UK.


Popular authors wrote best-sellers, such as ‘The gas war of 1940’, about coming wars that would lead to the annihilation of cities by bomber forces.


Western leaders were terrified of the knock-out blow, a sneak attack on their capitals by a huge enemy bomber force. Official estimates were for hundreds of thousands of casualties and the collapse of civil order.


London for several days will be one vast raving Bedlam, the hospitals will be stormed, traffic will cease, the homeless will shriek for help, the city will be a pandemonium. What of the government at Westminster? It will be swept away by an avalanche of terror.


The Germans worked hard to exploit these phobias.


During the 1930’s German planes took part in many international airshows and impressed observers with their performance. 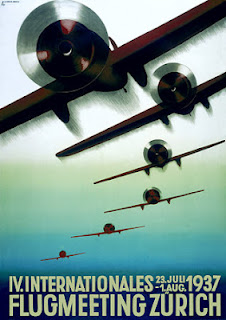 For example the Bf-109 equipped with a special 1,650 HP engine won in many categories in the 1937 Zurich air show. The prototype Bf-109V1 set a world record by reaching 755km/hour by using a 2,300 HP engine but the Germans called it Bf-109R to give the impression that it was a model in production.


The Dornier Do-17 bomber also took part in the Zurich competition and outflew all the foreign fighters. Again it was not the operational model but a prototype with a special set of 1,000 HP engines.


Outside observers had no way of knowing that the performance of these planes was not comparable to the standard models.


Colonel Charles Lindbergh was a celebrity in the 1930’s and when he visited Germany, between 1936 and 1938, he was given a tour of Luftwaffe airports and production facilities.


In his reports to US military authorities he stressed that the Germans were world leaders in a series of aviation technologies.


His statements to the press presented a powerful Luftwaffe equipped with thousands of modern planes.


The Germans sent a small air detachment equipped with fighters, bombers and recon planes to fight for the Nationalists in Spain. This unit gained world fame far in excess of its contribution to the military campaign.


Pro-communist propaganda did the Germans work for them by portraying German bomber attacks as holocausts.


The well known Guernica story is a case in point. The number of actual casualties was inflated in newspaper accounts by several orders of magnitude.


This attack on a civilian target may have turned public opinion against Germany but for the leading circles in France and Britain it was further proof of the Luftwaffe’s destructive power.


In 1938 the head of the French airforce General Vuillemin visited Germany and was taken around to see the rebuilt German airforce. 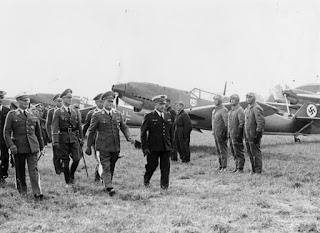 Everywhere he went he saw huge numbers of modern aircraft parked at runways. In exhibitions the German planes seems to be much faster than their counterparts in other countries.


During a trip on his transport a new German fighter flew by so fast that it made him feel he was stationary. With planes like these Germany was unstoppable.


What the General didn’t know was that the same planes were taken from airport to airport in order to impress him with their numbers.


As for the model he saw from his plane, it was again a mirage. The German transport pilot had skillfully reduced speed to the absolute limit and the fighter passed by at full speed thus giving the impression of unequaled speed!


When Vuillemin returned to France he warned the country’s leaders that the French airforce would be easily destroyed by the Luftwaffe.


In Britain the elite were split between those who supported appeasement and those who wanted rearmament.


The first group led by Prime Minister Chamberlain believed it was not in British best interests to intervene in Central European affairs and wanted to avoid excessive military spending.


The hawks led by Vansittart, Eden and Churchill wanted to build up the armed forces and especially the RAF in order to counter the expansionist plans of the dictatorships.


The doves presented the threat posed by the Luftwaffe as a reason for avoiding conflict. The hawks overstated Luftwaffe strength in order to force the government into spending more for the military.


The Germans were able to feed disinformation to British officials both through the media but also through a disinformation operation. In the 1930’s the Abwehr had succeeded in identifying the British intelligence officers in Holland and had managed to recruit some of them. At the same time they had a spy inside MI-6.


This material was accepted by the Brits since it fitted with their view of a powerful Luftwaffe.


The German propaganda offensive was so successful that even the German leadership was tricked into overestimating the capabilities of the Luftwaffe. In July 1939 Hitler visited a special exhibition of the latest Luftwaffe aircraft at Rechlin airport.


All the models presented were clearly ahead of anything the Allies could field. With these types into production the enemies of the Reich would be easily smashed.


Strengthened by this display of airpower Hitler was ready to risk going to war.


There was just a small problem. All the models presented were research models or were using special equipment that could not be mass produced. Goering was furious at his subordinates for tricking the Fuehrer. In 1942 he said: ‘I once witnessed a display before the war at Rechlin, and compared with that I can only say – what bunglers all our professional magicians are! Because the world has never before and never will again see the likes of what was conjured up before my – and far worse, the Führer’s – eyes at Rechlin!’


For most of the 1930’s Germany was weak militarily. This weakness should have led the National Socialist party into following a peaceful foreign policy.


Instead the Germans were able to manipulate foreign opinion and give the impression of great military power. Through the skillful use of propaganda and disinformation Britain and France were unable to intervene as their Allies in central Europe were forced to accept Hitler’s demands.


Fearing devastating bomber attacks on their cities foreign leaders were forced to capitulate to Hitler’s demands. At the same time Hitler’s forces were not ready for a serious conflict.


In the end however the German leadership became just as infatuated with the idea of an invincible airforce and Hitler’s decision to risk global war in 1939 may be attributed, in part, to it.


Sources: ‘Intelligence and strategy: selected essays’, ‘Deception: The Invisible War Between the KGB and the CIA’, ‘London calling North Pole’, ‘The War Path: Hitler's Germany 1933-1939’, ‘The right of the line: the Royal Air Force in the European War, 1939-1945’, Wikipedia