Nazi Germany had several codebreaking agencies both military and civilian. The armed forces had separate agencies for the Army, Navy and Airforce plus there were codebreaking departments in the Foreign Ministry, in Goering’s Forschungsamt and in the Supreme Command of the Armed Forces. This last department operated on civilian lines even though it was subordinated to the military.


The OKW/Chi agency
OKW/Chi - Oberkommando der Wehrmacht/Chiffrier Abteilung was the Signal Intelligence Agency of the Supreme Command of the Armed Forces. It had been established as a separate agency in 1920 and in the interwar period it was able to solve the codes of many foreign countries. Initially the focus was on philological research but the introduction of more complex codes and ciphers led the Germans to invest in mathematical research in the field of cryptanalysis.


The person who orchestrated this change in priorities was Wilhelm Fenner. Fenner started working for the department in 1921 together with his friend Fedor Novopaschenny, a former Tsarist codebreaker and in 1922 became an official employee. In the beginning he didn’t know much about solving codes but he learned mathematical techniques from his Russian friend and came to realize that the agency would need to make organizational changes in order to solve the more difficult foreign cryptosystems.
Since Fenner quickly became head of the cryptanalysis department he was able to carry out his plan to reorganize the agency. First he introduced a more rigorous training program for analysts and concentrated on the scientific analysis of cryptologic history and systems.


The next step in the 1930’s was to hire mathematicians.
Professor Huettenhain and OKW/Chi’s mathematical research department


The first mathematician hired by Fenner was Erich Huettenhain. In the mid 1930’s Huettenhain worked at the observatory of the University of Münster and came to Fenner’s attention when he contacted Chi with some of his proposals for cryptographic systems. Although his systems were ‘unusable without exception’ he was offered a job at Chi and he accepted.
Huettenhain became responsible for mathematical analysis of more difficult cipher systems and in the early years of WWII new personnel were hired to form a separate mathematical research department. 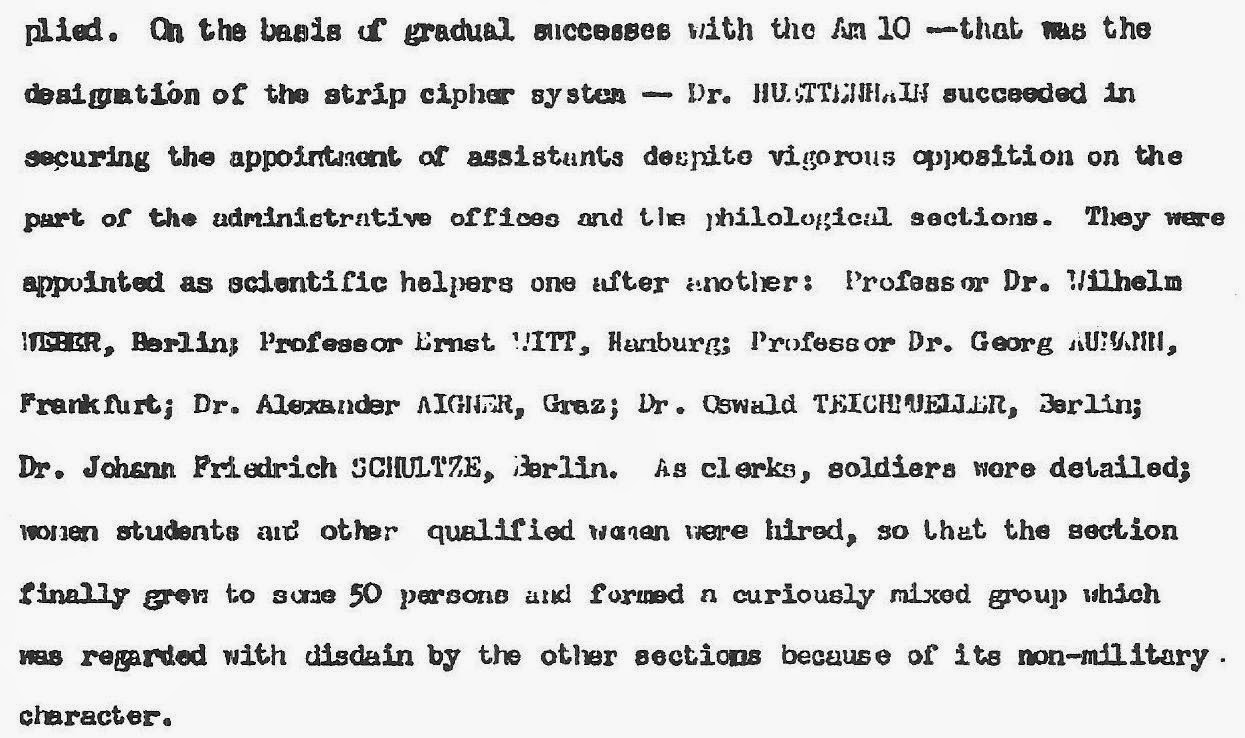 During the war they solved several difficult foreign cipher systems. Weber was successful with a Japanese diplomatic code transposed on a stencil, Witt solved the stencil subtractor frame used by the Polish diplomatic and intelligence service and Franz was responsible for the exploitation of the State Department’s strip cipher.
Apart from the aforementioned individuals, two more mathematicians, Karl Stein and Gisbert Hasenjaeger were hired to work in the cipher security department.


Franz’s area of expertise was topology.
Thanks to a friend of his who knew Huettenhain he was able to get assigned to the OKW Cipher department in Berlin in 1940. The initial training program consisted of solving simple codes and ciphers and as Franz was easily able to cope with these he moved on to real traffic.


The first systems he worked on were a Mexican and a Greek code and he was able to solve them. The most important system solved by Franz was the US diplomatic M-138-A strip cipher, called Am10 by the Germans:
‘Especially laborious and difficult work was connected with an American system which, judging by all indications was of great importance. This was the strip cipher system of the American diplomatic service which was subsequently solved in part.’


According to DF-176, p6 Franz had started his own investigations into this system and was able to make some limited progress when he received the ‘circular’ strips 0-1 and three ‘special’ strips used between Washington and Helsinki, Tallinn and Reval. Using these strips messages could be solved and his investigations could move forward. 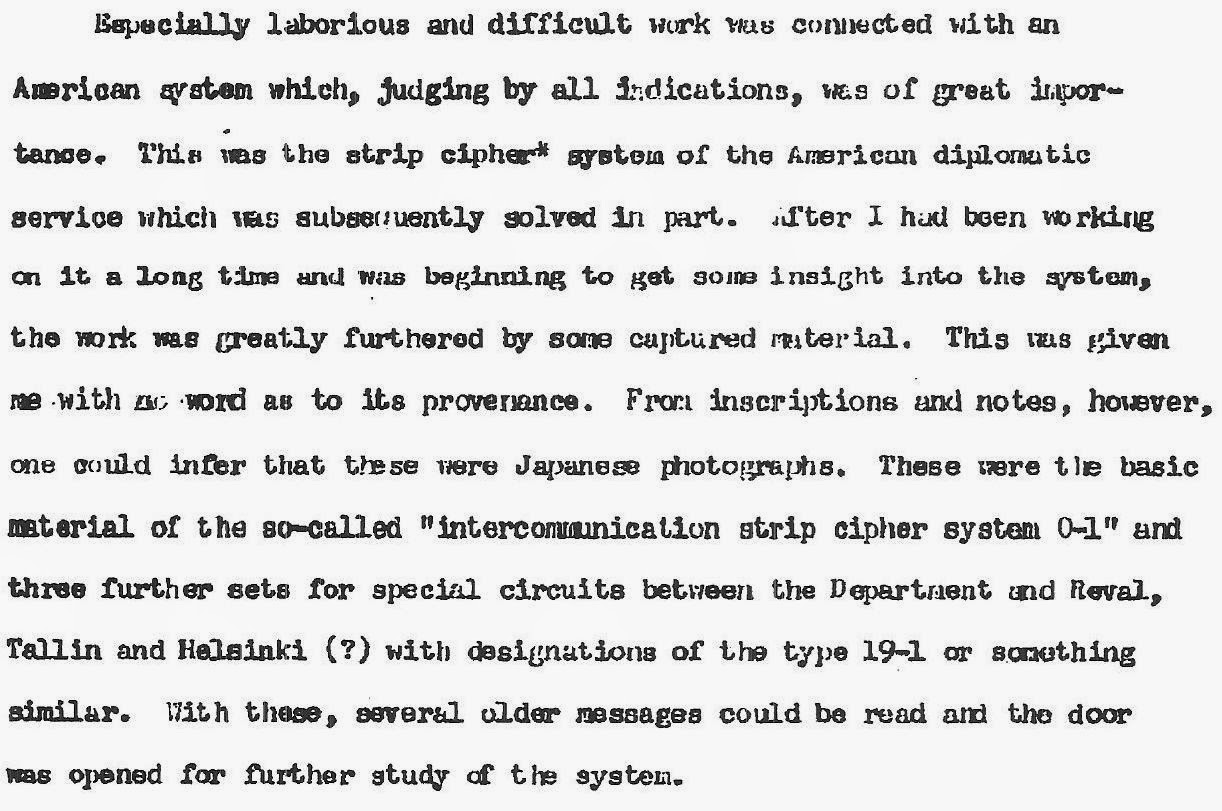 Thanks to the success of the department is solving the strip cipher dr Huettenhain was able to hire more mathematicians and expand the research section.


Regarding the strip cipher 70 ‘different traffics’ (links?) were identified and 28 solved plus 6 numerical keys. 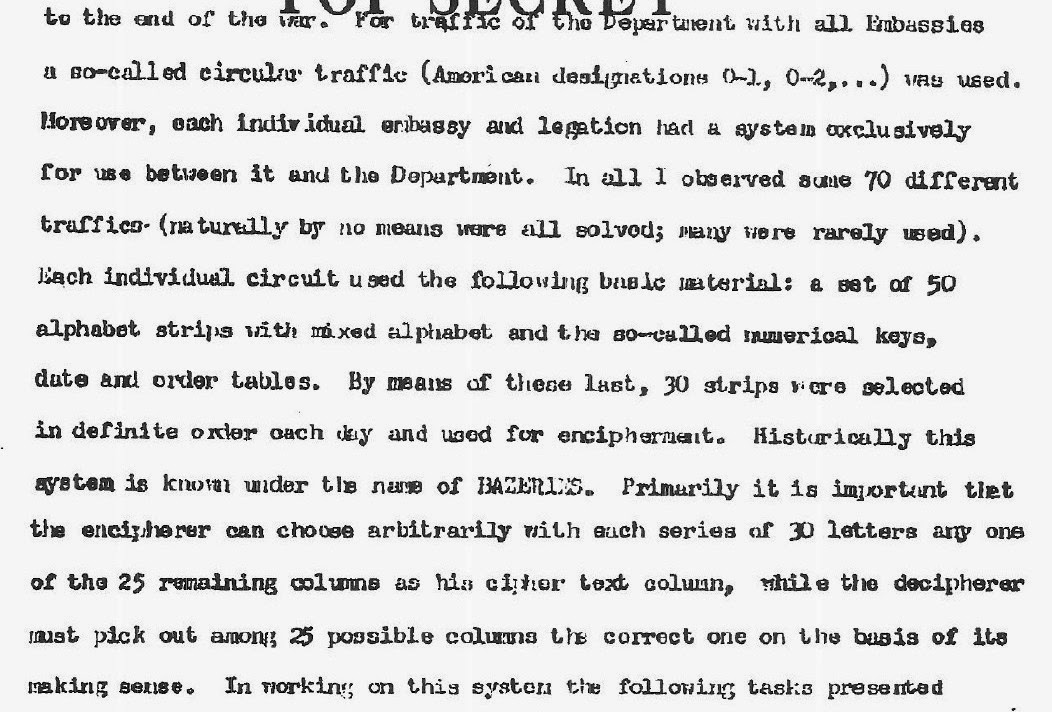 It is interesting to note that a special cryptanalytic device called the ‘Tower-Clock’ was used to solve the strip system. Franz says in pages 9-10:

‘In addition, there was built at my suggestion at the Bureau an electric machine which permits determining a number of repetitions of letters in a polyalphabetic substitution on a width of 30 with a depth of 20 to 80 lines, taking one line at a time, which naturally is fundamental for problem (f) above.’ 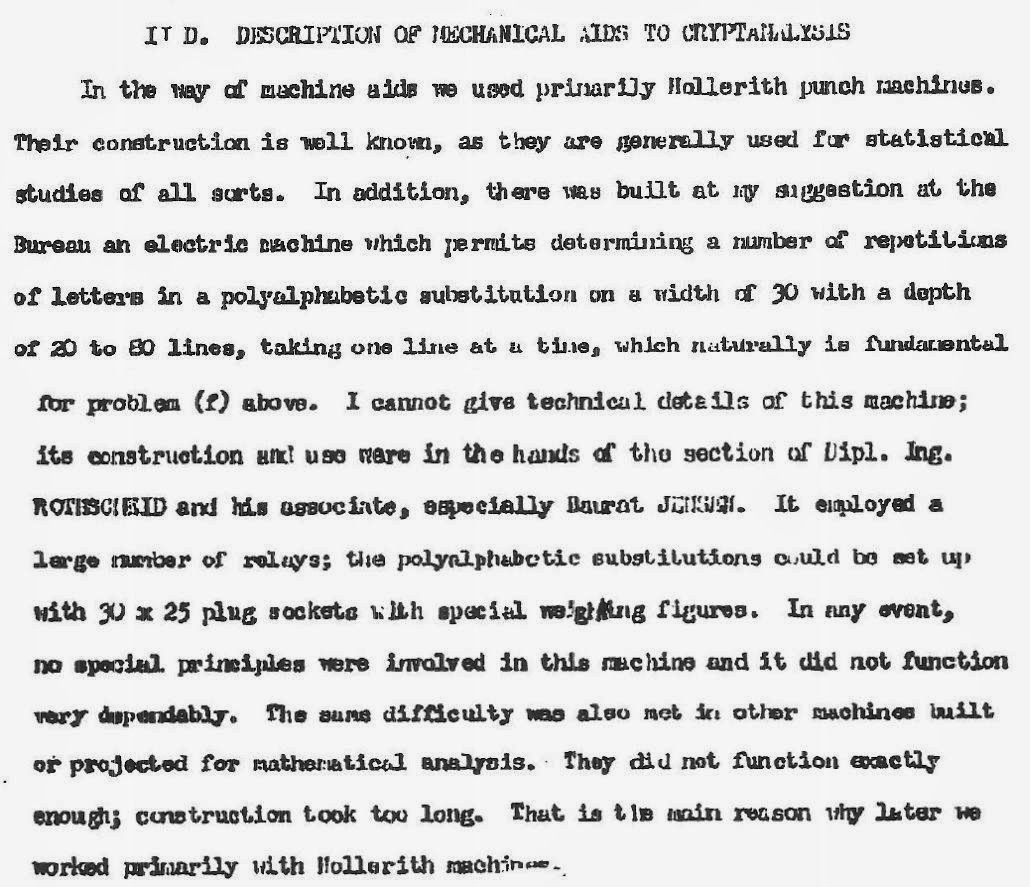 According to EASI vol2 ‘Notes on German High level Cryptography and Cryptanalysis’   , p56-57
c. Statistical "depth-increaser." - The "Turmuhr," or "Tower-Clock  was a device for testing a sequence of thirty consecutive cipher letters statistically against a given "depth" of similar sequences, to determine whether the former belonged to the given depth. It was used "primarily for work on the U.S. strip cipher, when cribbing which was generally employed was impossible. It cost approximately $1,000.00.

The apparatus consisted of a single teleprinter tape reading head (speed 1 1/2 symbols per second); a storage means, by which any one of five different scores could be assigned, on a basis of frequency, to each of the letters in the 30 separate monoalphabets that resulted from the 30 columns of depth; a distributor that rotated in synchronism with the tape stepping, and selected which set of 30 scores was to be used as basis for evaluating the successive cipher letters; and a pen recording device.

The German codebreakers were only able to exploit the strip cipher to such a degree thanks to serious mistakes in the use of the system by the State Department. Franz acknowledged this in page 6 of the DF-176 report:


‘This strip cipher system, when rightly employed, doubtlessly has great advantages .It appears to me, however, that it was not used with sufficient caution. Only through carelessness, in part through lack of care in setting up, was it possible to break into the system as far as we did. Only after the Americans had obviously noticed that many of their messages were being read was the application so modified that although the basic idea was the same the possibilities of breaking in were materially reduced.’

Postwar career
In the postwar period professor Franz returned to teaching at Frankfurt University where he eventually became dean of the newly established Department of Mathematics. Also in 1967 he became president of the German Mathematical Society.


In the end It might give some comfort to the Americans to know that their strip cipher was solved by a real gentleman, as report DF-176 says: ‘Personal contact with Dr Franz indicated that he was a gentleman of unusual scholarship and integrity, an impression confirmed by the report’.
Sources: TICOM reports DF-187 A-G and DF-176, ‘European Axis Signal Intelligence in World War II’ vol2