Another look at the reliability of the TICOM reports

I’ve already had a look at the reliability of the TICOM reports regarding the successes of the German codebreakers.


Going through some of my files I’ve noticed another clear cut case. Regarding Polish diplomatic codes we have the following statements from report I-63 ‘Interrogation Report on ORR Herrmann Scherschmidt of, Pers Z S, Auswaertiges Amt’, p3
‘5.Polish Systems:

Scherschmidt worked entirely on diplomatic traffic and was not familiar with military or agent systems or with any successes achieved on them. He had dabbled in Polish throughout his Pers Z S career and early in 1939 he was assigned to the main diplomatic code of the Polish Foreign Office. This had been in force since 1934, and some unsuccessful research had been done in an effort to ascertain the encipherment used. The problem was given a very high priority in 1939 and Scherschmidt had first class assistance. With the aid of a captured specimen of encipherment and a captured description of the indicator system, the first message was read early in 1940. The code was recovered gradually, and in 1941 and 1942 all messages was read, most of them currently. The code went out of use in October 1942 and was replaced by a letter code. Scherschmidt did a little work on this at first but did not come back to the problem later. He said the code was never solved, and he did not know details of the attacks made on it by KUNZE and others.’ 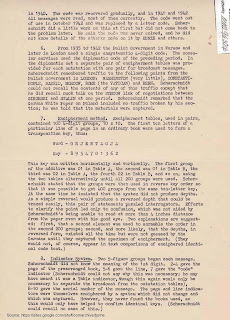 (Note that I’ve used the I-63 file from NARA that has been uploaded by the TICOM Archive site. My copy from the British Archives has parts redacted.)


Can this information be verified from some other source? The answer is yes.
The Cryptologia article ‘From the Archives: Polish Interwar MFA's Cipher Compromised?’ by Jan Bury presents two report written by Polish intelligence official Major Tadeusz Szumowski in 1940 and 1946-7 that verify the compromise of the Polish diplomatic code.


According to Szumowski the Poles had introduced the diplomatic ‘Code 45’ in 1933 and were aware that it might have been compromised. These suspicions became certainties when the British and French ambassadors in Berlin (Coulondre and Henderson) told them that they shouldn’t use this code when sending messages to them.


In April 1939 the Poles received another warning this time from Major Bartik, former chief of the Czech Counter Intelligence, regarding the compromise of their code.
This prompted the Polish leadership to authorize the use of a new code. Using trusted personnel a new letter code was prepared and printed and it ready for distribution in May 1940 but this operation was halted by Jan Ciechanowski the secretary general of the Polish Ministry of Foreign Affairs of the Government-in-Exile.


This act, according to Szumowski, amounted to treason:
‘These circumstances can hardly be explained by indolence and thoughtlessness at the MFA. This is rather negligence, which during the war is close to high treason and requires exemplary punishment. Personally I would be close to assuming that Mr Ciechanowski, considering the fact than an army officer [i.e. Szumowski] took care of the [development of the] cipher, was afraid the military could read the MFA’s messages, although he did not realize this was impossible knowing the cipher used unique tables.’


Eventually the new code ‘Alpha’ was distributed to posts abroad (first in the embassies in Paris, Rome and Bern) but the old ‘Code 45’ continued to be used by many other posts worldwide till end of ’42 when ‘Code 50’ was introduced. (Note that ‘Alpha’ and Code 50’ are also mentioned in the British report "Polish Cyphers 1942-1945", write-up by Jones-Williams (Berkeley St.))
If we compare the statements in I-63 with the Cryptologia article we see that the information is a perfect match. TICOM I-63 says that the Polish main diplomatic code was used since 1934, while the article says it was introduced in mid 1933. The Germans read it till end ’42 when the new letter code was introduced. Again this is verified from the article which refers to ‘Alpha’ and ‘Code 50’.

The reports by Szumowski allow us to answer an important question. In I-63 it is stated ‘The problem was given a very high priority in 1939 and Scherschmidt had first class assistance. With the aid of a captured specimen of encipherment and a captured description of the indicator system, the first message was read early in 1940’


I’ve wondered of how the Germans got hold of those documents. According to Szumowski the Czechs had this information and they were able to decode Polish communications in the late 30’s. When the Germans occupied the country in March 1939 they obviously found some of the secret Czech archives. That is why he was warned in 1939 by the Czech officials…