Wartime exploitation of Turkish codes by Axis and Allied powers

The Republic of Turkey remained neutral during most of WWII, while at the same time maintaining close economic relations with Germany. The Turkish leaders were successful in protecting their country’s territorial integrity through constant negotiations with Germany, Britain and the Soviet Union. They finally joined the Allied cause and declared war on the Axis only in February 1945.


During the war Turkey, as a neutral power, had a major advantage since it could operate embassies in both Allied and Axis nations. This gave Turkish officials the opportunity to get valuable information from both sides. For this reason Turkish diplomatic communications became a target for Axis and Allied cryptanalysts.
The Turks used mainly 4-figure codebooks (INKILAP, ZAFER, SAKARYA, CANKAYA, INONU, ISMET) enciphered with additive sequences.


Turkish systems were attacked by several German agencies. The diplomatic codes were attacked by the Pers Z, Forschungsamt and OKW/Chi. Military systems by the OKL Chi Stelle, the Army’s Inspectorate 7/VI and OKW/Chi.
Italy, Hungary and Finland also read Turkish traffic with significant success throughout the war.


All the Axis powers took advantage of the fact that some of the Turkish codebooks were simply repaginations of previous versions.


The codebreaking department of the Foreign Ministry - Pers Z attacked Turkish diplomatic systems since 1934. These were continuously solved till the end of the war. There was a separate department for Turkish traffic headed by Dr. Hermann Scherschmidt.
Goering’s Forschungsamt also read Turkish diplomatic traffic, especially that of the Moscow embassy.


The codebreaking department of the Armed Forces High Command - OKW/Chi dealt with Turkish military and diplomatic traffic with good results. The Turkish desk had about 10 people and was headed by Dr Locker. According to Mettig, second in command of OKW/Chi in the period 1943-45, the solution of the Turkish traffic (especially from London, Paris and Moscow) was one of the major OKW/Chi achievements during the war.

OKW/Chi decodes of Turkish diplomatic traffic can be found in the TICOM collection of the German Foreign Ministry’s Political Archive. 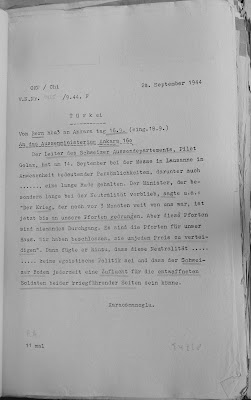 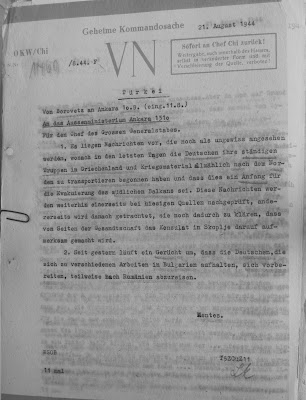 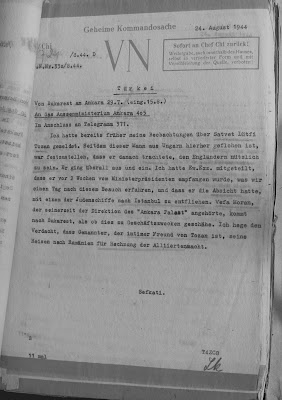 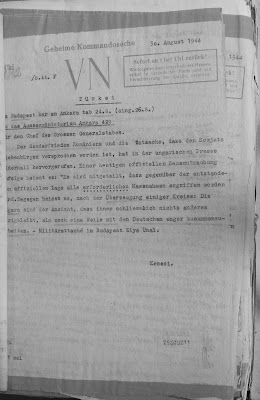 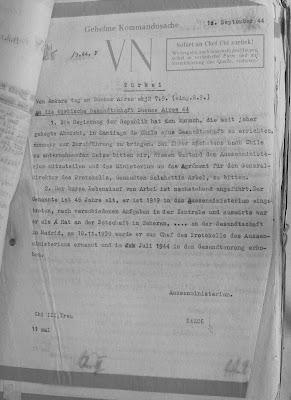 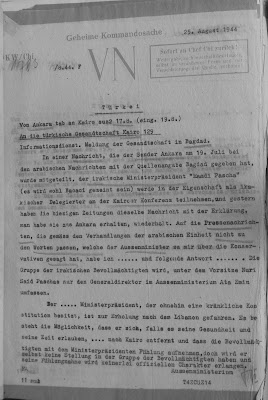 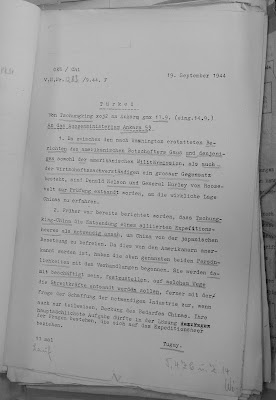 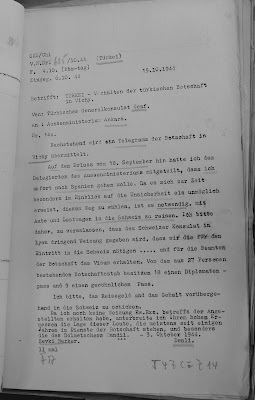 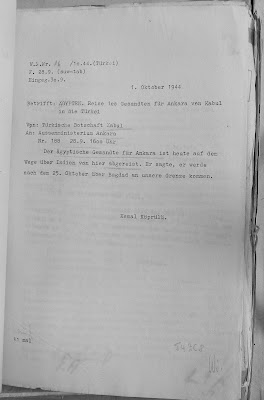 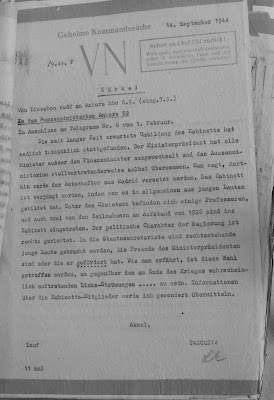 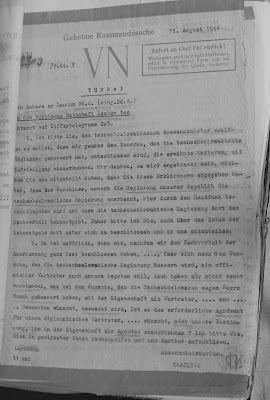 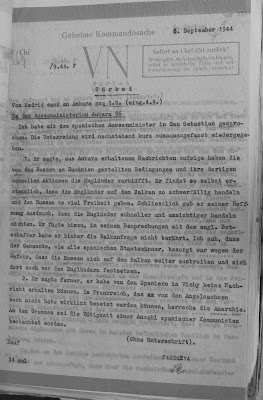 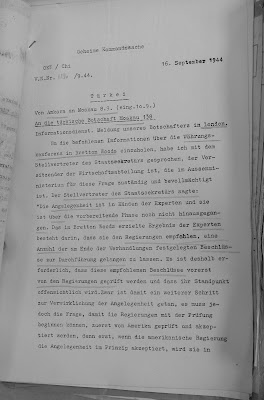 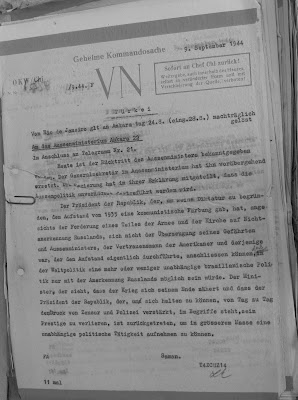 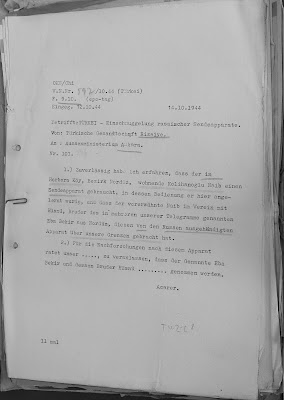 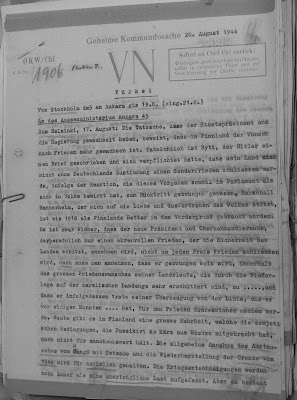 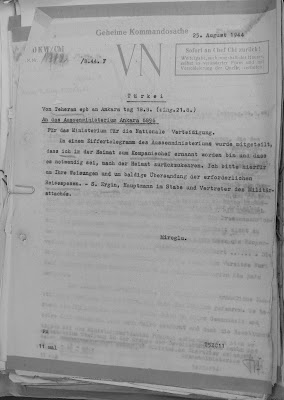 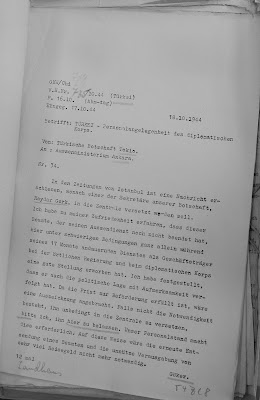 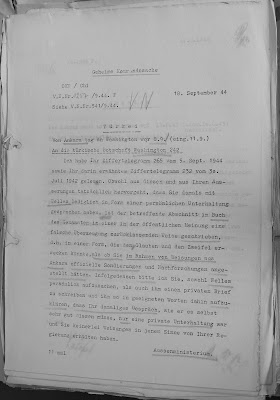 
The Army’s signal intelligence regiment KONA 4 monitored Turkish traffic both military and police. The central agency OKH/Inspectorate 7/VI read Turkish systems and shared results with the Forschungsamt. One of the codes read was that used by the Turkish president when onboard the state yacht ‘Savarona’. Army cryptanalyst Dettmann, head of cryptanalysis in the Eastern Front, says in DF-112 that the results of the Yalta conference became known to the Germans through Turkish messages.

The war diary of Inpsectorate 7/VI shows that Turkish codes were constantly read. For example: 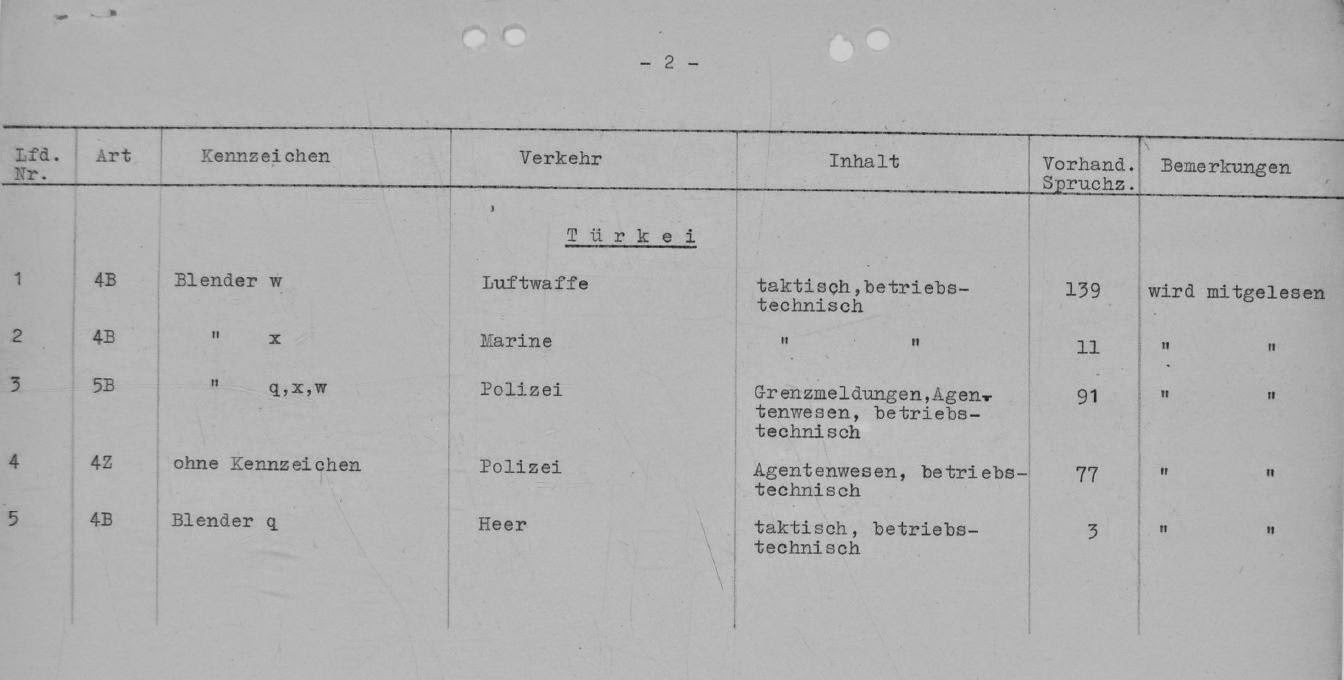 Most of this traffic was solved by forward units. The reports of KONA 4 (Kommandeur der Nachrichtenaufklärung - Signals Intelligence Regiment) which covered traffic from the Balkans and the Middle East show that Turkish military and police codes were solved in 1943-44. 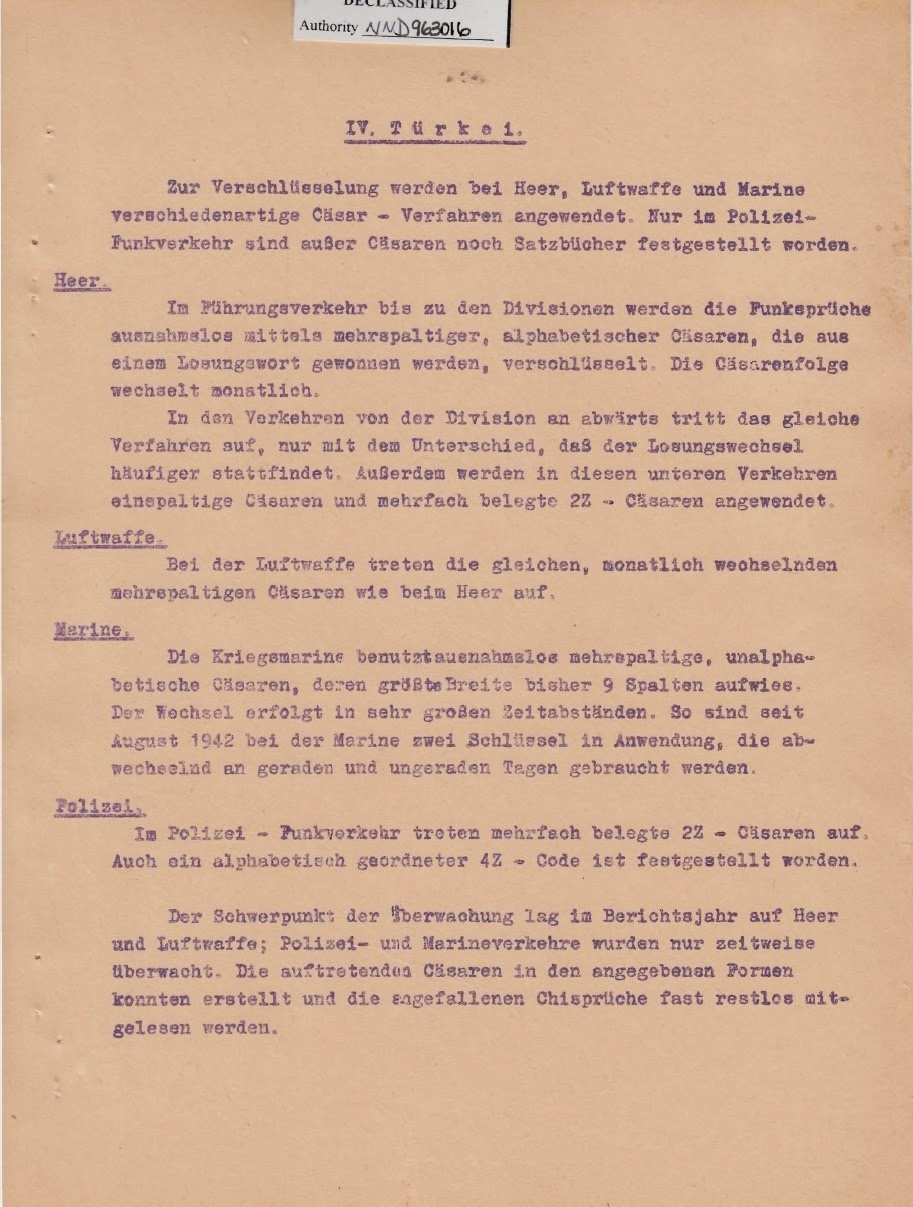 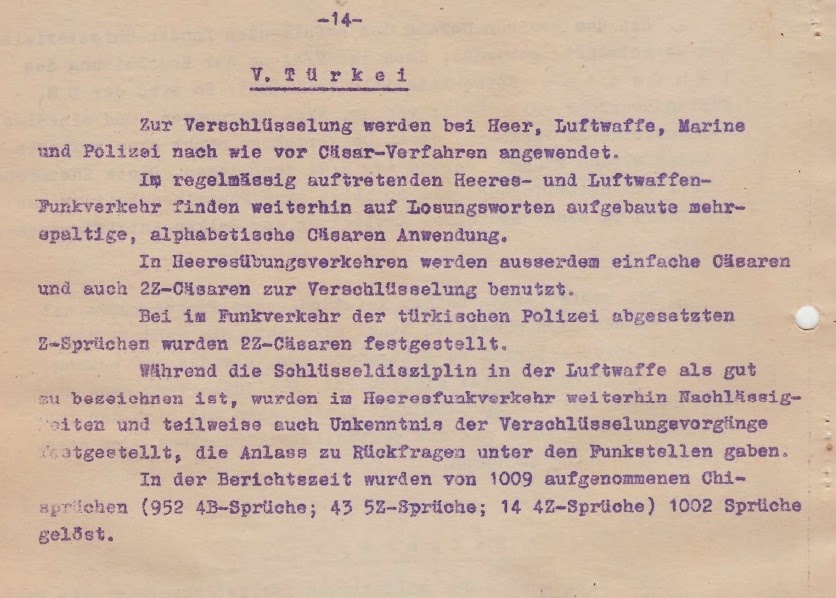 Italian effort
The Italians army’s cryptanalytic department, headed by General Gamba, attacked Turkish diplomatic and military attaché codes with success. These were solved both by physical compromise and cryptanalysis. Military and police traffic was intercepted and decoded by a small team assigned to an intercept station on the island of Rhodes. The Italians valued the intelligence gained from Turkish traffic, especially the information from the Moscow embassy.


Hungarian effort
The Hungarians put special emphasis on the solution of Turkish traffic and assigned their best cryptanalyst Titus Vass to the Turkish desk.


Finnish effort
The Finnish codebreaking department devoted a third of its cryptanalysts on Turkish traffic with the result that all the 4-figure codes were read. For example: 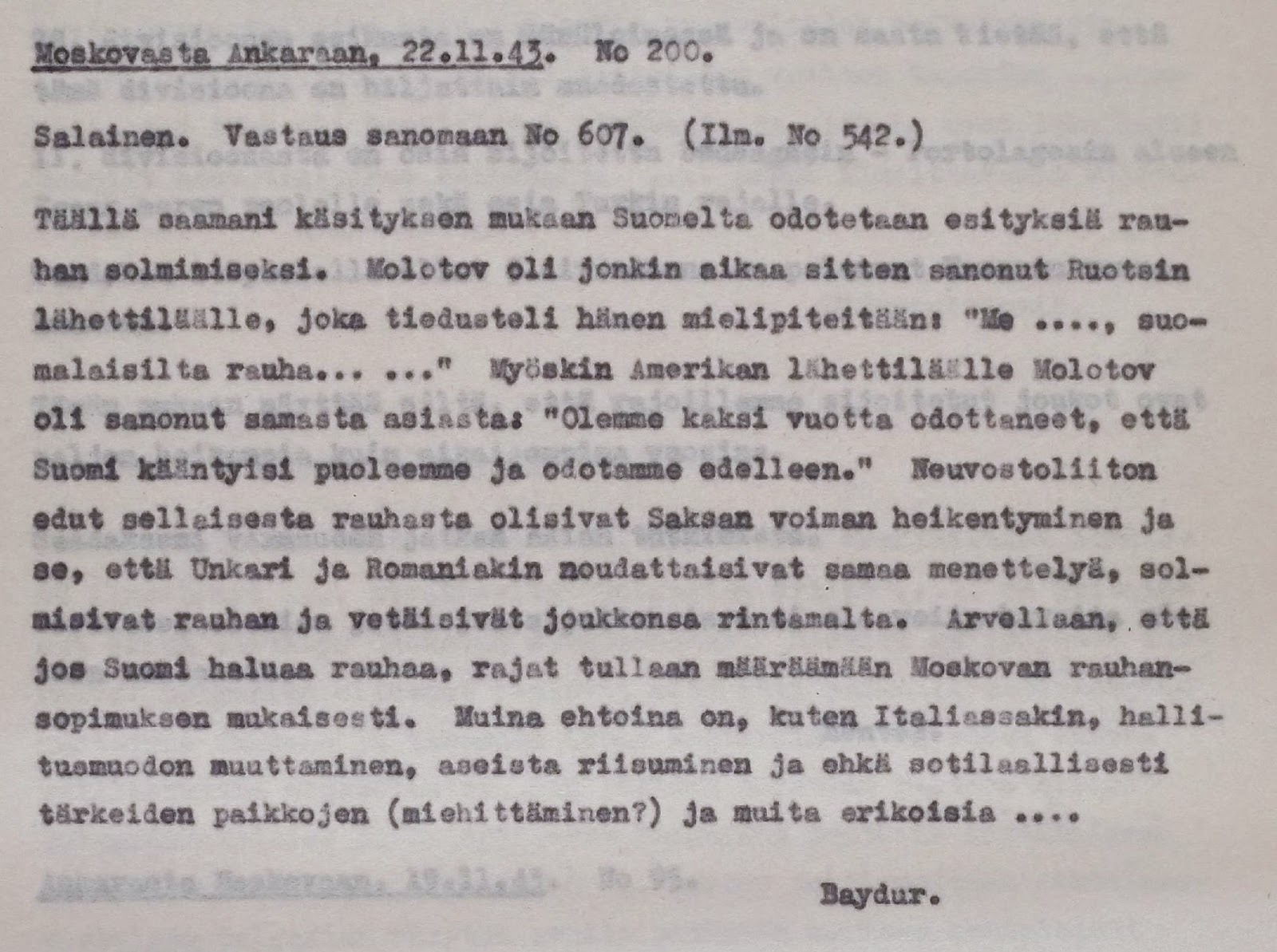 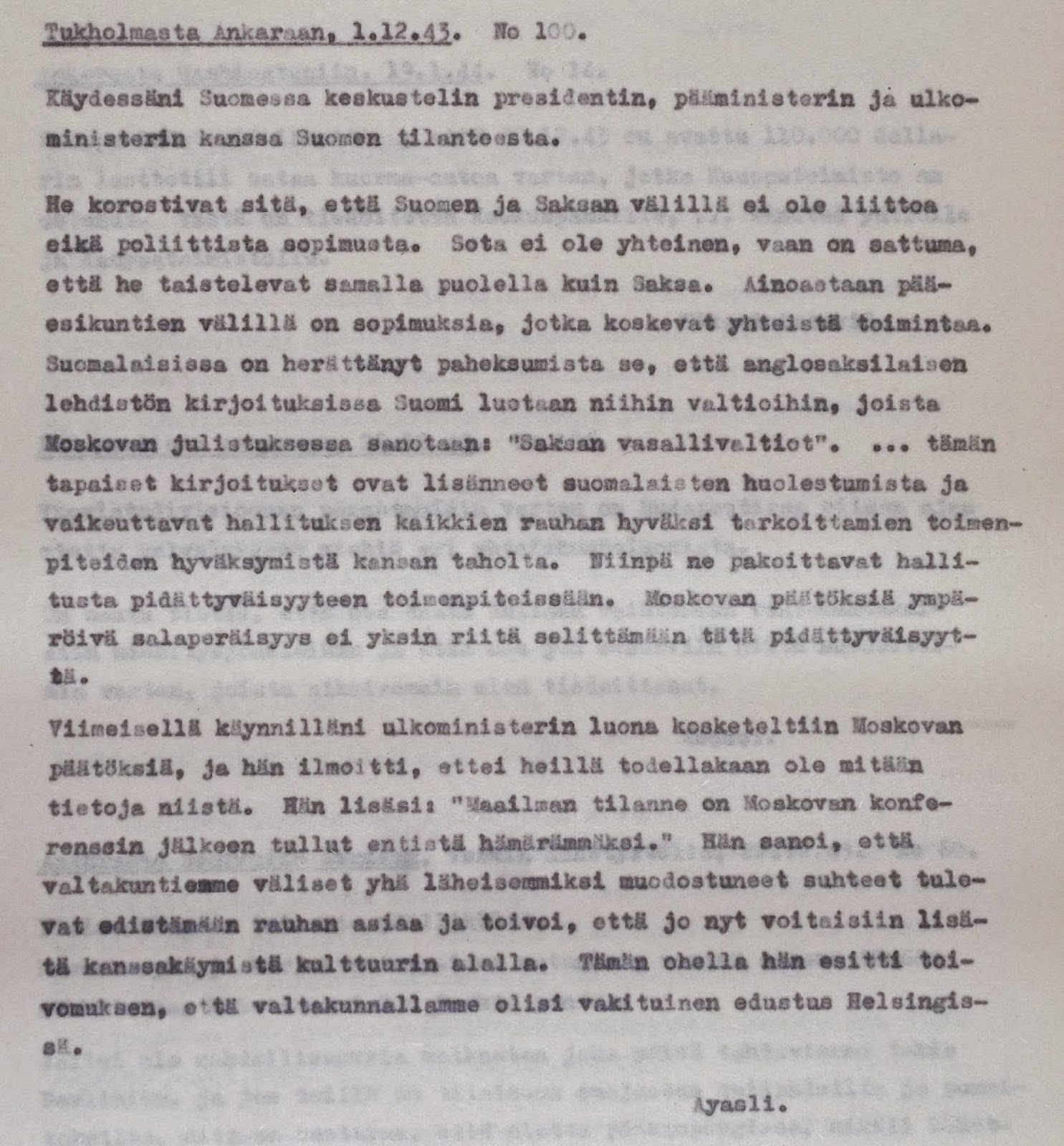 Allied effort
The Western Allies were also interested in the Turkish diplomatic communications.

‘Late in 1942 work was initiated on the systems of those governments who use the Arabic and Turkish languages.  After a modest beginning the traffic of the following governments was read: ‘Egypt, Ethiopia, Iran, Iraq, Lebanon, Saudi Arabia, Syria, Transjordan, and Turkey. Of these, by far the most Important in production of valuable information and in extent of the task of solution were the Turkish systems.’


The British codebreakers also exploited Turkish traffic. Britain had been reading Turkish traffic for decades and continued to do so during WWII. Diplomatic traffic was worked on not at the famous Bletchley Park facility but at the Diplomatic section in Berkeley Street, London. The embassies monitored were London, Kuibyshev, Teheran, Budapest, Lisbon, Rome, Madrid, Stockholm, Berlin, Washington, Vichy, South America, Helsinki, Bucharest, Sofia and Tokyo. Results were shared with the Americans. Decoded messages allowed them to keep an eye on Turkish-German relations and Soviet territorial demands.
It’s interesting to note that in 1944 the Brits had come to the conclusion that the insecurity of Turkish codes was becoming a problem since the Axis forces would also read these messages and gain valuable information. The British authorities wanted to send two cipher experts to convince the Turks to upgrade their systems but it doesn’t seem like the Turks considered this a good idea. The summary of report FO 850/135 says: ‘Refusal by the Turkish Government to receive two British cypher experts to advise on diplomatic and internal cyphers’...


Conclusion
Turkish codes seem to have yielded against anyone who was willing to invest the necessary resources against them. Even though Turkey was not that important politically or economically the fact that it had embassies in Axis and Allied capitals made its traffic valuable for all the major participants of the war.


Acknowledgements: I have to thank Ralph Erskine for information on the British exploitation of Turkish codes.