Philby was a member of the Cambridge Five and was recruited prior to WWII. He came from an aristocratic background which allowed him access to the best educational institutions. He gained wide recognition as a journalist for the Times of London when he went to Spain to cover the civil war.
In 1940 Philby started work for the British intelligence agency SOE and in 1941 moved over to Section V (counter-intelligence) of MI6. Thanks to his good work he became head of Section V in 1944. During his time in MI6 he befriended the American officer James Angleton who would later became chief of the CIA’s counter-intelligence department.
Probably thanks to this connection he got the job of representative of British intelligence in Washington. He would often meet Angleton for lunch and discuss operations. Thanks to Philby the Soviets had complete access to Anglo-American secret operations!
Eventually Philby’s career started to unravel and he fled to the Soviet Union in 1963.
Could this disaster have been avoided? Did the British have any information to incriminate him before he managed to climb so high?
It seems that the Soviet defector Walter Krivitsky did give information about Philby to MI6 in 1940.
Walter Krivitsky (real name Samuel Ginsberg) was head of the Soviet military intelligence - GRU in Western Europe. He defected in 1937 and managed to get to the USA where he wrote articles in newspapers attacking Stalin. Things did not turn out well for Krivitsky. The General was found dead in a Washington DC hotel on February 10, 1941.
However in 1940 he had visited the UK and was questioned about Soviet spy activities.
Let’s see some parts of his debriefing that could lead to Philby’s uncovering. Krivitsky is mentioned as ‘mr Thomas’. 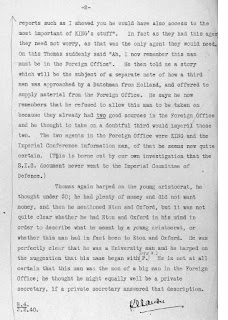 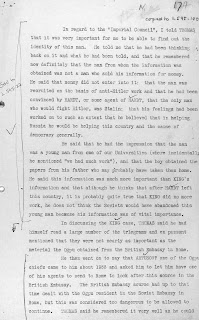 Philby did acquire papers from his father. It is mentioned in ‘Deadly illusions’ p152:
…..Even before the end of 1934, when he was still in the first stage of his recruitment, Philby’s file shows that he fed Deutsch confidential government information obtained from his father and a Cambridge associate who was working for the War Office. 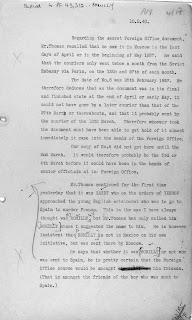 At that time Philby was indeed ordered by Soviet intelligence to provide information on Franco’s protective detail, obviously so that an assassination plan could be devised.
Overall Krivitsky’s tips are not conclusive but they should have alerted the Brits when doubts about Philby’s loyalties had begun to surface.
If I find more references to Philby in these files I will update this piece.
Sources: KV 2/804 ‘Walter J. KRIVITSKY’, ‘Deadly illusions’, Wikipedia.