Let’s take a look at a statement from ‘Why the Allies won’ by Richard Overy, p201


At one point in the war there were no fewer than 425 different aircraft models and variants in production. By the middle of the war the German army was equipped with 151 different makes of lorry and 150 different motor-cycles. With such a variety it was difficult to produce in mass.


Let’s focus on German aircraft production because the second part refers to equipment that the Germans captured from occupied countries so of course it would be varied (beggars can’t be choosers). 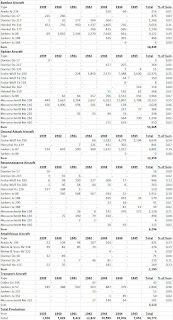 Source is Wikipedia but don’t worry I have the same numbers from the Appendix of ‘The Life and Death of the Luftwaffe’. The list doesn’t cover training planes and army liaison planes (Fi 156). With these the total is around 110.000.


Aircraft production was focused on a few types. The Bf-109 and FW-190 single-engine fighters, the Ju-88 and He-111 bombers plus the Bf-110 twin-engine fighter, the Ju-87 ground attack plane and the Ju-52 transport.


I think the statistics speak for themselves. Overy needs to have his head examined.