Intelligence histories of WWII tend to praise the work of the Anglo-Americans while at the same time downplaying the German successes. For those interested in a more realistic view of what happened the best sources are the memoirs of important German intelligence officers.


Let’s take a look at some interesting book: 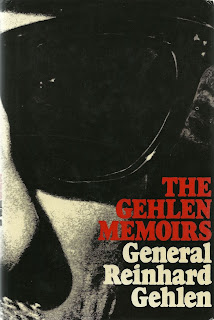 Gehlen was an army officer who in 1942 became the head of Foreign Armies East (Fremde Heere Ost), the Army’s intelligence evaluation center in the East. His job was to analyze intelligence from all available sources including sigint, spies and photo-reconnaissance.


At the end of the war he managed to use his detailed knowledge of the Soviet military as a bargaining chip with the Americans and thus get them to finance his intelligence service called the Gehlen Organization. In 1956 this department became the official foreign intelligence service of the West German state, the Bundesnachrichtendienst. He remained head of the BND till 1968.


Most of the memoir covers his post-war work against the Soviet Union but the first 100 pages deal with interesting WWII events. 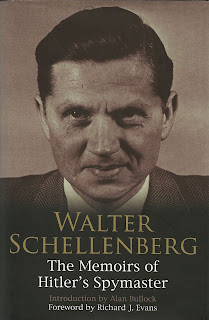 Schellenberg is one of the most fascinating persons in the history of intelligence. He was a law student who joined the SS security service Sicherheitsdienst in the early 1930’s. There he managed to climb the ranks and played a vital role in the Venlo affair, getting a medal from Hitler for his efforts.


His work took him around Europe, from visits to Sweden to check on his intelligence network to Turkey to talk with the head of that country’s secret service.


At the end of the war he surrendered to the Allies and took part in the Nuremberg trials. He was sentenced to 6 years in prison but released early on medical grounds and died of cancer in 1952.


His book mentions countless important events like details of intelligence operations throughout Europe, his talks with Himmler and Heydrich, efforts to assassinate the leader of the Black Front Otto Strasser, the double games of the Japanese secret service, the hunt for the Rote Kapelle and his undercover efforts to contact Allied personalities that could promote a peace initiative.


This book would make a good movie. 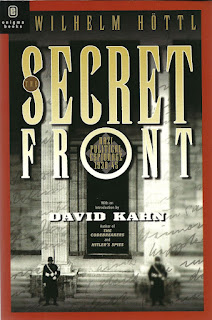 Höttl was head of Sicherheitsdienst foreign intelligence for Southeastern Europe. His book mentions many interesting operations, for example the efforts to locate where Mussolini was being held in 1943, the double game played by Admiral Horthy in Hungary, the cooperation of the Italian army with Tito’s partisans. Höttl had access to the Hungarian cryptologic service and he was given copies of their decrypts. He was also in charge of an operation to bankrupt Britain by printing forged pounds.


In spring 1945 he met several times with Allen Dulles (head of the OSS station in Berne) and arranged for the surrender of the German forces in Italy.


After the war he worked as a freelancer. 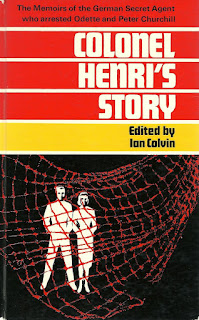 Bleicher was drafted into the army and while in France came to the attention of an Abwehr officer due to his knowledge of the French language. After taking part in the interrogation of an enemy agent as a translator Bleicher was transferred to the military intelligence service Abwehr. There he managed to become very successful in arresting and turning around enemy agents.


Thanks to his efforts many resistance groups were destroyed or in some cases allowed to exist after German agents had been maneuvered to top positions.


One of his greatest successes was the arrest of SOE agents Peter Churchill and Odette Sansom in 1943.


The MI-5 file on Bleicher says : ‘Bleicher, often operating under a pseudonym such as "Colonel Heinrich", was one of the most effective German agents operating in France against the Resistance (though he is noted after his capture on this file as saying he would rather have spent his time arresting criminals and black marketers). He was a member of the Abwehr, the German military intelligence organisation.


He was closely involved in the rounding up of several agent networks and was involved in the interrogations of numerous resisters. Among his most notable captures were the British agents Peter Churchill and Odette Sansom; he was also a key figure in the breakup of the Special Operations Executive's PROSPER network, which he successfully infiltrated’


Bleicher was the German James Bond. 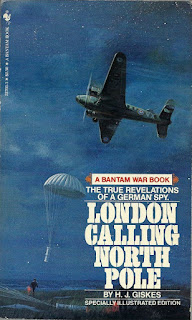 In 1941 Giskes was transferred from the Abwehr counterintelligence department in France to the similar unit in Holland. In late 1941 and early 1942 radio-spies were located and arrested in that country.

Giskes had the idea that in the future arrests should be kept secret and the links with London maintained in order to control the spies being sent to Holland. The next radio-spy to be arrested was forced to use his radio-set and codes to communicate with the Brits and give the impression that the Dutch resistance was very effective. From then on the Brits continued to send more spies and supplies whose arrival was communicated by radio so they were captured by the Germans. Tons of equipment (weapons, explosives, money) were captured by the Germans.

This deception was successfully carried out till March 1944. Overall more than 50 Dutch agents were captured upon arrival and most were executed by 1945.

This operation was called Nordpol by the Abwehr and Englandspiel by the Sicherheitsdienst. The word Nordpol (North Pole) was chosen for a specific reason. In 1942 Giskes was informed by one of his spies that the resistance had prepared a radio-station. However the Radio security unit of the Ordnungspolizei could not find any illicit radio-communications. So Giskes wrote at the end of the agents report ‘Go to the North Pole with your stories. There is no communications between Holland and England’. Of course in a few days the transmissions were picked up so to get even his second in command named the operation Nordpol!

Nordpol/Englandspiel was undeniably one of the worst defeats of British intelligence.

After the war Giskes worked for the Gehlen Organization and later the Bundesnachrichtendienst.