Practically all histories of WWII follow the same structure: initially the Axis powers manage to surprise the Allies and win some great victories but then the forces of democracy (plus the Soviet Union) rally up the troops and start winning the battles thanks to Allied superiority in strategy, intelligence and so on. The outcome of the war is always close in the balance. If the Germans or the Japanese had made some different decisions things would be very different and the Allies would be in danger of losing the war.


A book that takes a completely different view is ‘Brute Force’ by John Ellis. I think this book is one of the most important ones written about WWII. 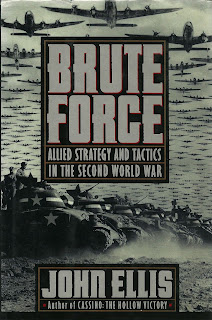 The main point is that based on the Allied economic and manpower potential even a negotiated surrender was beyond the grasp of the Axis forces.


Ellis shows the incredible disparity between Axis and Allied war production (weapon systems and raw materials) in the statistical appendix at the end of the book. Some examples for 1939-45 production:


This huge material superiority should have made WWII easy to win for the Allies.


The problem for the Allies is that they made very poor use of their numerical superiority. Both in theatres against Germany and in the Far East against Japan they misused their resources.


In the Battle of France the Germans did not have numerical superiority. In fact their armored force was inferior both in quantity and quality compared to the Franco-British force.  They won by concentrating their mobile forces.


The Battle of Britain is supposed to be an example of the outnumbered RAF winning against the superior Luftwaffe. However if we look at fighter strength  things were much closer.


In North Africa the Brits managed to lose countless battles due to their lack of coordination between infantry, armor, artillery and airpower. The author points out that in the Second Battle of El Alamein Montgomery had significant numerical superiority and excellent intelligence on the enemy forces but still could not cut off and destroy the Africa Corps.


In Italy the Germans proved masters of defense and held on to half the country with limited forces. Allied operations showed lack of initiative and made very slow progress.


In Western Europe the Allies suffered heavy losses in Normandy despite having numerical superiority and air dominance. When they broke out in late July they were unable to cut off and destroy the majority of the German forces in the Falaise pocket. The same thing happened in the Battle of the Bulge. The German forces were defeated but not surrounded and destroyed.


In the Atlantic the Germans started with a very small submarine force and it took them too long to build it up. In the meantime the Allies were able to produce more ships than the U-boats could sink and build up their defenses (surface ships, escort carriers, long range naval aircraft). However it took too long for the Allies to build up their long range naval recon squadrons.


In the air war the performance of the RAF’s Bomber Command is criticized for being ineffective in the period 1939-42 despite receiving a large part of the defense budget. In the second half of the war the fixation with the night bombing of cities did not contribute to the dislocation of German industry nor did it knock Germany out of the war as was claimed by the RAF leadership. Moreover these missions had a very high loss rate for Bomber Command crews.


In the Eastern front the Germans were able to inflict very heavy losses on the Soviet military, yet the Soviets not only made up the losses but greatly expanded the size of their army. No matter how many formations the Germans surrounded and destroyed the Russians were able to field new ones. On the other hand Soviet victories were won at great cost in blood.


In the Far East the US Army and the US Navy fought two different wars. The Army fought in the South West Pacific while the Navy sent its Marines to retake islands of no strategic value in the Central Pacific. McArthur’s advance in New Guinea and the Philippines cut off Japan from its major raw material centers (especially oil) in South Asia. On the other hand the Pacific islands could have been bypassed. This duplication of effort was a complete waste of resources.


The author makes a convincing case that in all these campaigns  the Allies misused their numerical (and often qualitative) superiority thus extending the war.