Details on the Soviet diplomatic code

The Soviet Union used from 1927 onwards one time pad to encipher its diplomatic codes.

During WWII a copy of its diplomatic code fell into Axis hands.

The diplomatic code 26 was one of the codebooks captured by the Finns at the Soviet Consulate at Petsamo on 22 June 1941.The other books were the NKVD Pobeda code , a GRU codebook and a Naval GRU codebook. These were shared with the Germans and Japanese. [Source: ‘Venona’, p4 by Nigel West].


Here is a 1944 message from Tokyo to the Military attachés in Helsinki and Bucharest describing the Soviet diplomatic code. 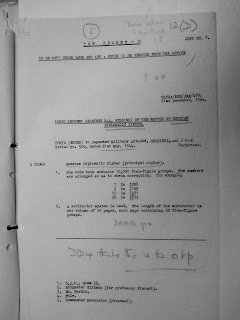 The repetition of the values may have been helpful against corruptions but it could also be taken advantage by a codebreaker.