Book review- Behind the Urals: An American Worker in Russia's City of Steel

In the 1930’s the main goal of the communist regime in the Soviet Union was the rapid industrialization of the country. New factories were built all over the country and farmers were brought in to work in them. The need for specialized labor also attracted some foreign engineers who were facing unemployment in their own countries due to the Great Depression. 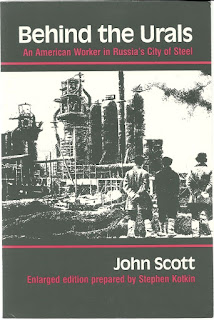 A small group of foreigners who immigrated to the Soviet Union during that period were the ‘true believers’ in communism.


One of them was John Scott, son of radical economist Scott Nearing. Scott left the United States, that was at that time trapped in the Great Depression, and went to the Magnitogorsk area of the Urals in 1932.


Magnitogorsk had huge metal deposits and factories were built to exploit those resources. The communist regime was sparing no expense in importing the best foreign machinery and in attracting experienced engineers from abroad. Scott was able to participate in the industrialization of an agricultural society and in his memoirs he gives the reader a very clear view of what it was like to live and work in the Soviet Union of the 1930’s.


The everyday life was brutal. Accommodations were poor, fuel and food lacking and the work was very dangerous with people being injured or killed every day. The main problem was the lack of trained personnel. All the workers were peasants who had left their villages in search of a better life as factory workers. Some were hostile to the communist regime but the majority was happy to have left the fields and they spent their limited free time learning to read and write. Those who had already mastered the basics studied engineering.


Progress was hampered by the purges of the 1930’s and the search for imaginary spies and counterrevolutionaries.


An interesting aspect of the book is the analysis of the industrial centers in the Urals. According to Scott the decision to invest huge sums in the Ural industries had primarily a military character since they would be safe from invaders.  He calls these centers in Nizhny Tagil, Sverdlovsk, Chelyabinsk, Magnitogorsk, Perm, Ufa, Zlatoust, Berezniki, Solikamsk, Bashkortostan, Orsk and other areas  ‘Stalin’s Ural stronghold’.


Overall this is a unique book in the sense that the writer participated in one of the greatest social and economic experiments of the 20th century. Since the book was written in 1942, at a time when the Soviet Union was still in danger of military defeat, one wonders if the analysis of the Ural stronghold was meant to inform Anglo-American policy makers of the Soviet Union’s economic power and resilience.