During and prior to WWII the German Army’s signal intelligence agency OKH/GdNA (prior to 1944 known as OKH/In 7/VI) put a lot of effort into solving Soviet high level codes. Apart from the army 5-figure codes, NKVD systems were also attacked.


In both cases the Germans were successful, at least for significant periods of time.
I have already given an overview of their efforts vs the 5-figure code here.

The NKVD systems are also very interesting since according to Alexis Dettmann (head of cryptanalysis at Intercept Control Station East - HLS Ost) the NKVD was the first Soviet agency to use radio communications for a large part of its internal traffic. In the years 1935-36 approximately 70% of decoded messages were from NKVD departments.


The codes used by the NKVD were 2,3,4-figure substitution systems and 4,5-figure codebooks enciphered with Bloknot (book where each page had a random sequence of numbers, organized in numbered rows and columns).


Cryptanalysis of NKVD codes, throughout the war, was aided by the fact that despite the large number of NKVD departments only a small number of codes were used and these for long periods of time (often more than two years).


The importance of NKVD messages was attributed to the position of that agency in the Soviet Union as not only a security organ but also an organization that dealt with economic administration and secret intelligence.
There were two major reasons why the solution of NKVD codes was given a high priority:


1.     By solving the NKVD codes it was possible to keep track of events in the rear of the Soviet armies.


2.     Since the NKVD was also supervising economic production in the country’s interior its reports provided a rare glimpse into the performance of the Soviet economy.

Conditions in the rear areas:


From the decoded messages of the border troops, railway troops and GUP/Smersh it was possible to learn of NKVD operations in the rear areas of the Soviet controlled territories. These operations concerned the apprehension of Axis agents, the arrest and liquidation of traitors and spies (real or imagined), regular battles with nationalist movements and the arrest of Soviet army deserters.


Border troops of the NKVD:


By reading the border troops codes the Germans learned the structure, duties, effectiveness and strength of the following units:


3.     Odessa/control station Odessa. Bessarabia to the east coast of Crimea.


4.     Novorossijsk/Control station Novorossijsk. Coastal area Sea of Azov and the northwest coast of the Black Sea.


5.      Transcaucasus/Control stations Sukhum and Baku. East coast of the Black, Sea, Turkish border and that with Iran and the West coast of the Caspian Sea.


6.     Kasakhstan/control station Tashkent and Alma Ata. East coast of the Caspian Sea and the frontier toward other Asiatic countries.

From the monitoring of the wireless traffic of the NKVD troops it was discovered that, with the beginning of the war, in the areas opposite hostile countries a continuous and deep echeloned girdle had been set up at a distance of 30-60km behind the fighting troops. The reason was to secure the rear areas from any enemy interference and prevent desertions.


Of approximately 200 border guards regiments one third manned the front line of the security belt, another third was stationed further back and the last third constituted a mobile reserve.


Each regiment guarded an area 60km wide and was responsible for securing the rear areas of specific army units, so the Germans could check the position of Soviet Armies by looking at the movement of their assigned NKVD regiments.


The protection of the railway system was a function of the NKVD railway troops and from decoded messages it was ascertained that close to the front there were many cases of theft, murder and high-jacking. In the Ukraine the railway troops fought against the Ukrainian Insurgent Army. These reports also showed the concentration of supplies at specific areas and provided hints for incoming actions.


As a security organ one of the main missions of the NKVD was counterintelligence. During the war the SMERSH department was formed from the NKGB section of the NKVD and was responsible for combating enemy agents. According to Dettmann this department’s significance, method of functioning and employment were well known to the Germans, thanks to decoded messages, particularly in the last year of the war.


Oberleutnant Schubert, also of OKH/GdNA, mentioned that messages of the NKGB concerned measures against enemy agents and Soviet espionage operations.


Another function of the NKVD was to supervise the State planned economy and issue reports to the Soviet leadership. From reading these reports the Germans gained information regarding the capacity of many branches of the economy and the problems they faced. This was especially important during the war. Dettmann mentions economic traffic from the Urals and the Kuznetsk Basin.


NKVD 5-figure: These codes were worked on at OKH/GdNA HQ as they carried traffic of the Command networks of the NKVD. Unfortunately Dettmann doesn’t give specific details on the success achieved against them.  In EASI vol4 it is stated that they were mainly enciphered with one time pad.


NKVD 4-figure: Several 4-figure codes were solved, however here I will mention only those that were enciphered by Bloknot as that was the highest level cryptographic system used by the SU.


1.     First non alphabetic code of interior troops NKVD and of border guard and security troops (front staff and GUP) facing hostile countries. Codebook enciphered with random additive tables. Used from January 1942 to November 1944. Traffic was heavy, up to 300 msg daily and readability was very good due to reuse of the same additive. Up to late ’42 only parts could be read as the codebook had not been completely reconstructed. 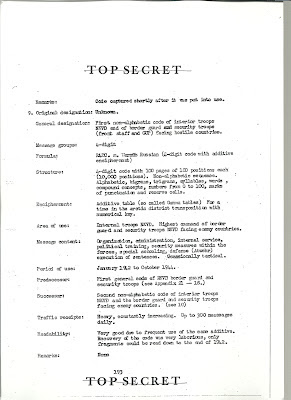 2.     Second non alphabetic code of interior troops NKVD and of border guard and security troops (front staff and GUP) facing hostile countries. Codebook enciphered with random additive tables. From January 1945 double additive was used. Used from November 1944 to May 1945 (at least). Traffic was heavy, often more than 300 msg per day and readability was good even after double additive was used. 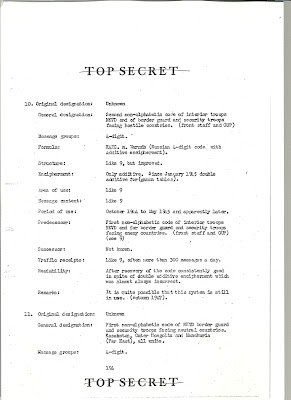 3.     First non alphabetic code of interior troops NKVD and of border guard and security troops (front staff and GUP) facing neutral countries. Kazakhstan, Outer Mongolia and Manchuria (Far East),all units. Used from September 1943 to May 1945. Traffic was up to 50 msg per day and results were good as the same additive was reused. 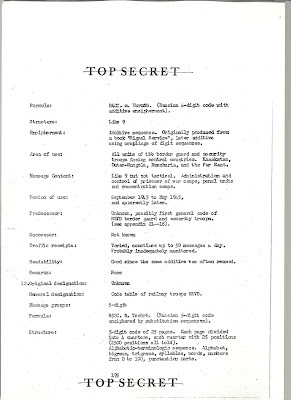 
Another 4-figure code was a reserve system in use from August 1938 to January 1943.This did not use Bloknot but I mention it here because during the war it was used by practically all NKVD departments and the content was often ‘very important and interesting’. This codebook was recovered in 1938/39 and from then on it was completely readable (provided enough traffic was intercepted). 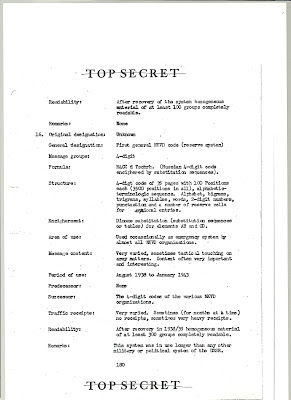 
For the Germans the NKVD, with its many responsibilities, was the equivalent of the Abwehr, Geheime Feldpolizei , Gestapo, Sicherheitsdienst and SS. Such a huge organization was a great source of intelligence on events in the Soviet interior.


The solution of NKVD codes was one of the major achievements of the German army’s signal intelligence agency. Unfortunately, just like the 5-figure story, it has not been recognized by historians.

Update: More information on NKVD codes is available in Compromise of Soviet codes in WWII.