The highest level code used by the Soviet military was the 5-figure codebook enciphered with Blocknot (book where each page had a random sequence of numbers, organized in numbered rows and columns).


There were two main categories of  Blocknots :


1.     The Individual in which each table of random numbers was used only once (at least that was the theory).


2.     The General in which each page of the Blocknot was valid for one day. The security of the additive sequence rested on the choice of different starting points for each message.


German success with the 5-figure code is mentioned by the following people :


9.     Gerlach , probably signals officer (not clarified in the FMS report)


I’m going to write a detailed essay about all this in the future but for know I’d like to give the general details on the Soviet codes . The most detailed source is Ticom report DF-112 (available in the Ticom folder)  written by Alexis Dettmann .He calls all these code-systems ‘’operational and tactical code of the supreme command of the RKKA for army and airforce’’. Traffic was heavy during the Soviet-Finnish war and from summer ’41 onwards ( ~ 300 messages per day).


4.     045-A. Used from Mar'42 to Mar'43. Initially broken so fragments could be read. Then captured summer'42.Success similar to 0-23A.Increased use of one-time pad (individual blocknot) .Readability decreasing.


6.     091-A.Used from Mar'44 to May'45 (at least).Captured after put into use. Ever decreasing success. Rare use of general additive. Enciphered indicators. 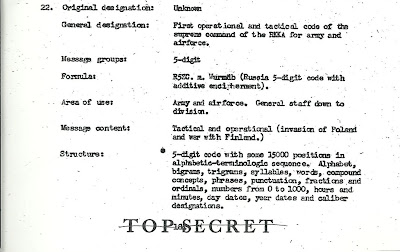 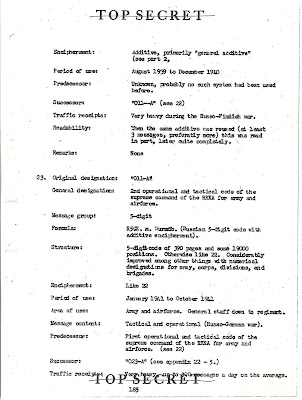 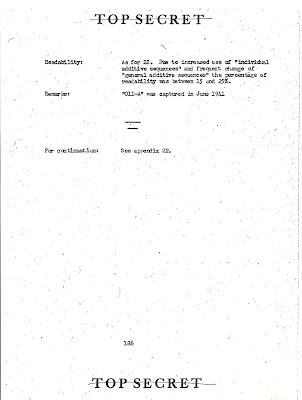 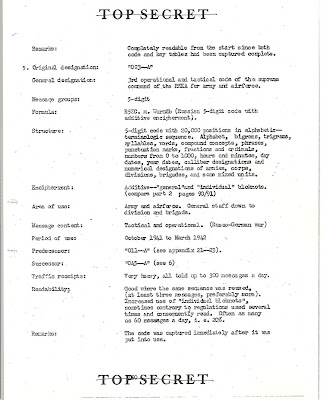 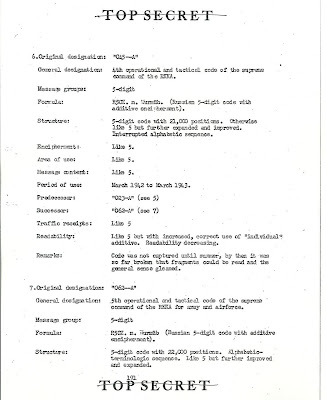 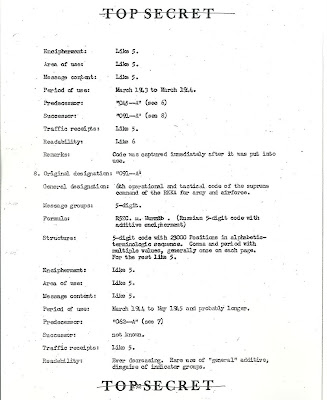 
The continuity of success from 1939/40 to 1944 is impressive. Each successive code was broken and in addition a copy was captured, which meant that when the additive was stripped all sequences could be translated into words.


Success was achieved not only against the General pads but also against the Individual ones. According to Marquart the Russian cipher clerks reused the last pages when supplies were running low.


Was the success rate good or bad? Dettman gives no figure for the first code .For codes 2 and 3 he gives 15-25% and for 4 and 5 says similar but decreasing. The last one, 091-A, seems to have been rarely read. Most of the sources mention great success in the period 1941-Spring ’43. Mettig also mentions the solution of the 5-figure code after spring ’43 as one of the major achievements of the Army Signal Intelligence Agency. Given traffic of 300 msg per day and a percentage of 10%-20% we get 30-60 high level messages per day and 900-1.800 per month. Lingen says 1,000 were intercepted and in some cases up to 300 decoded each day during ’41-’43.Perhaps he is referring to the combined output of OKH,OKL and OKW.


For comparison’s sake the Allies considered the breaking of the Tunny teleprinter as one of their greatest cryptanalytic achievements. The success rate: ~5% from 4th quarter ’42 to 3d quarter ’44 and 8% overall. [Source: General Report on Tunny ]


Still the low percentages were tolerated since the decodes contained high level information.


However there is a general trend of diminishing results. Initially the Russians use almost exclusively General pads but in 1944/45 they use Individual pads for almost all the messages. That is not the only security measure hindering the Germans. According to Mettig in spring ’43 the traffic is ‘’split by Front’’ and external indicators are enciphered. Also it seems that initially the 5-digit groups forming the additive sequence were taken from the pad in only one way ( left to right and top to bottom) but later they could be taken in any number of ways. These difficulties forced the Germans to make extensive use of Hollerith/IBM equipment for cryptanalysis.


Both Lingen and Dettman state that cryptanalysis gave the Germans valuable information about the concentration of enemy forces. Lingen mentions specifically about the 5-figure code: ‘’They contained complete lists of losses of men and material, the combination of several scattered and virtually annihilated divisions. In them was reported the status of the troop units, supply, regroupings of units of all branches and impending actions’’. [Source: Ticom DF-292 ,p39].


The solution of the highest level Soviet code was an impressive achievement which has not been recognized by historians.


Did the Soviet authorities learn of the German success? Was that the reason for the increased use of Individual pads? Or was the use of General pads an anomaly caused by problems in printing and distributing the Individual pads during the war?


Another more interesting question is what success (if any) did the Russian codebreakers have with German high level codes? So far there is no information of possible cryptanalytic success with the Enigma and the cipher teleprinters.


A more detailed essay will follow with information from a large number of Ticom reports.
Update: More information on the Soviet military’s enciphered 5-figure code is available in Compromise of Soviet codes in WWII.