The partisan groups were in constant contact with Moscow and they used their own cipher systems to protect their radio communications. For the Germans the solution of these codes was given a high priority and in 1943 Signals Intelligence regiment 6 (KONA 6) was assigned to monitor and decode this traffic.
The person in charge was Oberleutnant Schubert and he successfully carried out this assignment. From summer 1943 the traffic was decoded and a lot of information was revealed. These messages were also passed on to the Abwehr organization.


Thankfully in this case we have information from all the participants of this operation. Details about the exploitation of partisan codes are given by:
1.    Mettig , head of the Army’s signal intelligence agency in the period 1941-43


2.    Schubert, cryptologist in charge of the program


4.     Abwehr officers who received these reports


Let’s take a look at all this information.
1).From TICOM I-78 ‘Interrogation of Oberstlt. Mettig on the History and Achievements of OKH/AHA/ln 7/VI’ , p8-9


Crypto-analytic work on partisan traffic was carried on by the forward "Y" units in the area. Particular success was achieved in the SMOLENSK area with the arrival of specialist cryptographers.
It was only in the summer of 1943 however, when KNA 6, with Oblt SCHUBERT in charge of the cryptographers was committed to anti-partisan work that the traffic between MOSCOW and the partisans was successfully read.


17. Organization of KONA 6.
KONA 6 was activated as an eastern KONA at Frankfurt/Main in 1941 and stationed in the Crimea to work in the Caucasian campaign. After that campaign, its assignment was the interception of Russian partisan traffic. This remained its task until the KONA was detached in early 1944 and reassigned to work on the western front.


2).Horst Schubert was an Oberleutnant in the German army’s signal intelligence agency OKH/In 7/VI. He joined the agency in 1941 and worked on Soviet army codes till March 1943. Then he worked on Soviet partisan codes till late ‘43 .At that time he became head of the Russian section.

A summary of his career is given in TICOM report I-26 ‘Interrogation of Oblt. Schubert (OKH/Chef HNW/Gen.d.NA) on Russian Military and Agents’ systems at OKM Signals School, Flensburg on 17 June 1945’, p1 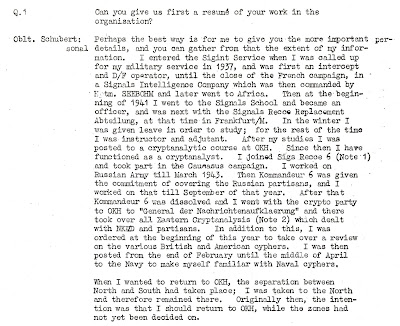 
Schubert:
Russian Agents systems were tried by Vauck, who said they could not be solved, later, he said they were digit substitutions and P/L encyphered with a One Time running key derived from a book. I worked on partisan and parachute traffic under front-line conditions. This traffic was a subtractor made from a book.


There was a double transposition system in the partisan traffic which was easily soluble up to June 1944. The transposition keys were derived from two key phrases modified daily. There was no limit to the length of messages and all messages on one day used the same key.
I was only superficially acquainted with Balkan agents traffic. This was done by the Balkan section not the Russian.

More details regarding the various partisan cryptosystems are available in pages 8-14 of TICOM report I-26. According to Schubert the Soviet partisans used mainly double transposition, figure codes enciphered with subtractor groups and various simple substitution systems.

The most common system was simple letter to figure substitution. 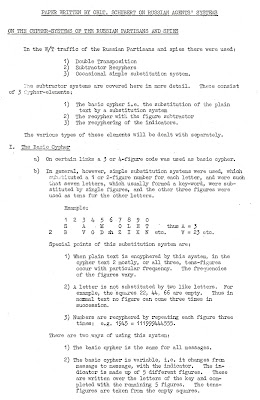 In some networks the figure codes were further enciphered using subtractor groups. The subtractor groups were either taken from a teleprinter roll, from tables or generated from an indicator. The teleprinter rolls were called ‘Blocknot rulon’ and since they were only used once they had the security of the one-time pad system. Additionally tables containing numerical groups for encipherment were also used. 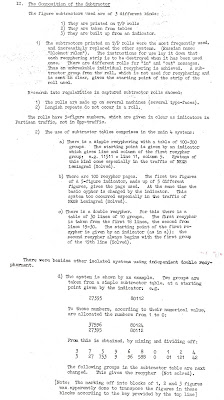 When a group did not have access to teleprinter rolls or subtractor tables they could use numerical sequences generated from an indicator, using various methods. 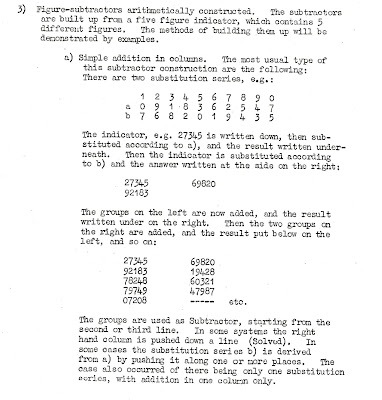 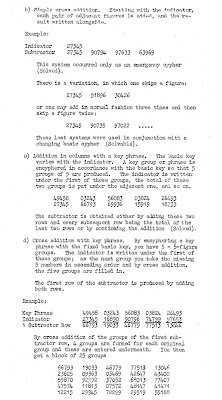 The war diary of Inspectorate 7/VI confirms these statements and shows that the traffic of Partisan groups (Bandenfunk) was read since June 1943. First the 2 and 3 and 4-figure codes were solved and from August the 5-figure system could also be read.

According to the reports as long as the partisans did not use one time pad for the majority of messages their figure traffic could be exploited.
October 1943

3).Kurt Friedrichsohn served with KONA 6 and he mentions the work on partisan codes:
From ‘Report of interrogation of Kurt Friedrichsohn, former member of  Kommandeur der Nachrichtenaufklaerung 6 ‘, pages 9-10 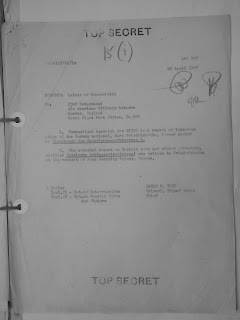 
"The NA Kommandeur No. 6 was in no way different from other signal communications intelligence units in the East. During the German advance in 1942 this unit was engaged in the southern section, and advanced there as far as the Caucasus (Maikop, Saporoshje, Krasnodar). After the Battle of Stalingrad the unit was drawn back, and settled down in Minsk. Activities were resumed there. The Kommandeur No. 6 consisted of the following:
a)     Staff Commander No. 6


'’The Intelligence Analysis Section No. 6 was divided into the following departments:
"1 listening department


1 interpreter and decipherers, and analysis personnel
1 section of drivers, technicians, and kitchen personnel


The work was exactly as described previously. The unit was responsible to the Army, and had as a mission to pick up enemy transmissions and partisan transmissions. Radio communications from the partisans were very active, and were in part most revealing, as far as operations on the Eastern front were concerned. As to contents, the partisan transmissions were not very valuable, as they mainly consisted of reports of past operations, as for instance "the partisan unit OTRJAD "ARTJUHOW" has blown X trains in one week", or, "During an attack against a German unit, Y soldiers were killed", etc. Besides this there were also operational messages for the delivery by 'chute of supplies, prearranged signals by reception committees, etc., congratulations on promotions, new decorations, political slogans, and also troop movements. The transmissions always had a sender and an addressee; very seldom cover names, or general addressees, such as Chief. In some cases they were addressed very generally, such as, "To All Commanders".
…………………………………………………………………………………………………………………………….. 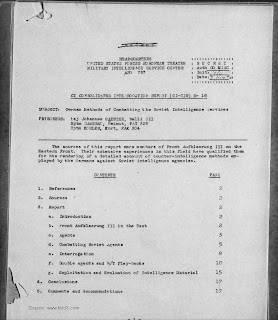 
In view of the difficulties encountered by PAK III agencies in dealing with partisan-held areas, supervision of signal traffic-became of increasing importance. Nachrichten aufklaerung monitored all Russian agents, which was the concern of Funk Abwehr. Military signal traffic beyond the MLR was dealt with by Kdr der Nachrichten Aufklaerung 3 (this may apply only to the northern sector of the Russian front). Traffic from stations behind the Russian lines into partisan-held territory was handled by Kdr der Nachrichten Aufklaerung 6 at MINSK for the whole Eastern front. The Kdrs were subordinated to Chef Heeres Nachrichten Wesen in the OKH. Funk Abwehr belonged to WNVFu III (Wehrmachts Nachrichten Verbindung Funk III) of the OKW.


Nachrichten Aufklaerung 6
Most successful in monitoring and decoding was Kdr der Nachrichten Aufklaerung 6, who furnished FAK III daily with decoded transcriptions of a major part of the W/T traffic between partisan and NKGB stations. Little of this traffic remained a secret to the Germans after Autumn 1943. The following are typical intercepted Messages which L/Stelle III Ost decoded and relayed to FAKs and FATS for counter-measures:


‘’To NKGB detachment NIKITIN. Observe traffic along road A to B. Note especially tank traffic. Your work has recently deteriorated. Your resident agents should be better organized and supervised. MAKAROV".
"To ZENTRUM. We have discovered that Ivan GE ASIMOV and Andrey ALEXANDREYEV, placed in the POLOSK city administration, are Gestapo double agents. On 4 July we shall send a group led by Comrade IVANOV to liquidate the traitors. NIKITIN."


Conclusion:
The solution of partisan codes is another very interesting part of the intelligence war in the Eastern front. By monitoring their messages the Germans could anticipate enemy actions and take countermeasures against sabotage. The Abwehr could also use the secret information for its counterintelligence operations


In some cases it was also possible to reach conclusions about Soviet war strategy based on the tasks given to the partisans from Moscow. Orders for increased activity usually preceded a major Red army attack.
The exploitation of partisan communications by the German army could not lead to their total defeat but it did allow for their operations to be kept under control.