This is quite a difficult subject to fully analyze. The idea that the Germans mismanaged their war economy is one of the most enduring myths of WWII. This idea is strange considering that everyone acknowledges the ‘economic miracles’ of the period 1933-39 and of the postwar recovery. Why would the Germans do things right up to 1939 and after 1945 but mess things up in between?


Let’s start at the beginning. After taking emergency measures and restarting military production the German economy stabilized and in the mid thirties was running at full speed, meaning that the internal factors of production were fully exploited.
Before the war the main problem was how to finance the import of raw materials that were needed for the production of civilian and military goods. Here the Germans used several tricks including bilateral trade agreements and ‘stealth’ credit.  At the same time they invested in technologies that would allow them to substitute foreign raw materials with internal production (low grade German ores, synthetic rubber, synthetic fuel).


In the period 1939-41 Germany gained control of a large number of European countries BUT could not exploit their economies to the fullest because they were dependent on imports of raw materials. Since the British Royal Navy blockaded Europe those countries instead of adding to the German economy had to be supplied with scarce resources (for example coal for their energy needs and chemicals for their agriculture).
In the period 1942-44 military production increased significantly despite shortages of raw materials and a bombing campaign by the Anglo-Americans. It was this increase in production that led to the creation of the Speer myth.


According to the standard account prior to Speer’s appointment as Armaments minister in 1942 there was widespread wastage and underutilization of industry.
Speer in his memoir ‘Inside the Third Reich’ attributes the increase in production to his radical measures. In chapter 15 (aptly named ‘Organized improvisation’) he lists the main policies:


1). ‘industrial self-responsibility’ with civilian committees being responsible for each procurement program instead of Army personnel and bureaucrats who did not know how industry worked.
2). Standardization of weapons and emphasis on long term production vs the old policy of ‘frequently assigned contracts only for a limited time’.


3). Giving positions of responsibility to younger, energetic men (below 40).
According to him one of the main problems was excessive bureaucratization of the government agencies. Instead his policy was to promote personal initiative and improvisation.


His policies seem to have been successful. For example two categories that are always mentioned are tracked fighting vehicles and combat aircraft:

Such a rise in production must have been made possible by eliminating waste and mismanagement. What else could be the reason?


Debunking the Speer myth
Things become clearer if we look at the two largest production categories of the war economy, ammunition and aircraft. 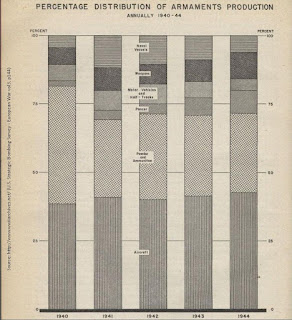 
Ammunition production
From ‘The Wages of Destruction: The Making and Breaking of the Nazi Economy’, p575-6

‘The driving force of this spectacular increase, however, was anything but miraculous. To reiterate, in so far as Speer was responsible, the most important factor was ammunition. And the increased production of ammunition was not primarily an effect of rationalization or reorganization. It was a direct result of a hugely increased allocation of steel. From September 1939 to the end of 1943, there is a near-perfect correlation between the allocation of steel to ammunition production and the quantity of ammunition produced. When plenty of steel was allocated, ammunition production was buoyant. When the steel supply was restricted, so was the production of ammunition, and this relationship holds both before and after February 1942. To the extent that there was a major surge in labour productivity within the remit of the Speer Ministry, the indicator usually used to measure rationalization success, this in fact confirms the rate-limiting role of steel. Without enough raw material, neither labour nor the available industrial plant could be used efficiently.’ 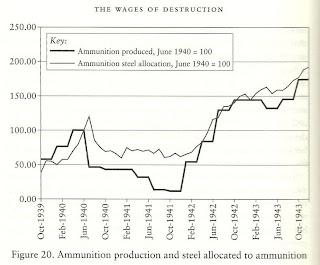 
Aircraft production
After WWI Germany was prohibited from having a military aircraft industry. This meant that in the 1930’s, when rearmament started, the effort to rebuild this industry was constrained by the lack of industrial resources, trained manpower and aviation technology. It took years to build up factories, acquire modern aero engine technology and develop aircraft models for mass production. The Luftwaffe played a major role in the plans of the Nazi regime and thus huge resources were invested in the airforce. Did aircraft production rise as a result of Speer’s rationalization program?


‘This paper uses the annual audit reports of the Deutsche Revisions- und Treuhand AG for seven firms which together represented about 50 % of the German aircraft producers. We question the received view by showing that in the German aircraft industry the crucial changes that triggered the upswing in aircraft production already occurred before World War II. The government decided in 1938 that aircraft producers had to concentrate on a few different types, and in 1937 that cost-plus contracts were replaced with fixed price contracts. What followed was not a sudden production miracle but a continuous development which was fuelled first by learning-by doing and then by the ongoing growth of the capital and labor endowment.’
Aircraft manufacturers had already taken measures similar to those that Speer promoted so again there was no miracle in the increased production. The same study says in page 20:

‘The precise timing of the Ju88 program gives us some idea, why the concurrence of the German armament miracle and Albert Speer’s reign might just have been coincidental. It was in May 1938 when the aviation department finally decided that the Ju88 bomber would become one of the major weapons of the German air force. The firms which were chosen to participate in this program were instructed to end their established production and adapt their plants to the new design instead. Production of the Ju88 bombers started in 1939. The firms used the following two years to move down their learning curves and to realize the substantial increases in labor productivity that occurred in the early stage of a production run. Around the end of 1941 the production processes were finally broken in, and the Ju88 producers were ready to take off. In February 1942 Albert Speer became armament minister, in the middle of a seasonal downturn. This was exactly the right time to be credited with the considerable increase in the Ju88 production in the following two and a half years. This growth was not a sudden miracle made possible by Speer but the continuation of a development that started in 1938 and was fuelled by the ongoing learning effects shown by table 6 and the growth of the firms’ capital and labor endowment discussed in section 2.’ 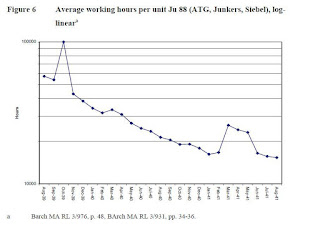 So why did the Germans produce more armaments in the period 1943-44?


The answer is simple. For the same reason they produced more in 1941-42 compared to 1939-40.
Production rose because more inputs of raw materials, capital and labor were invested. At the same time workers became better at producing weapon systems whose specifications had been fixed for a long time.


There were certainly benefits from cutting down on inefficiencies and bureaucracy but these were not the primary reasons.
The main cause for the 1943-44 ‘miracle’ was the diversion of resources from long term investment into production.


Major investments in infrastructure started in the 1930’s but took till mid war to become operational. These projects absorbed large quantities of capital and labor without contributing to the output of munitions. Once they were completed they helped boost production plus the resources that they kept occupied could be redirected to other projects. 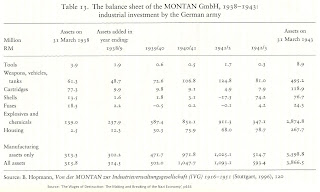 For example tank production significantly increased thanks to the expansion of existing tank facilities and by building new factories, especially the gigantic Nibelungenwerk in Austria.


Aircraft production took advantage of investment in the expansion of aero engine capacity but also profited from the production of the same types throughout the war (Bf109, FW-190, JU-88, Ju-52, He-111 etc).
In both cases we also need to consider that production numbers were boosted by taking shortcuts. In the case of tanks there was an emphasis on vehicle production at the expense of spare parts (engines, transmissions, gearboxes etc). In the aircraft industry the impressive production numbers of 1943-44 were achieved by concentrating resources on the single engined fighters Bf109 and FW-190. These were much cheaper to build than the twin engined Ju-88 bomber. For example in terms of weight we have Bf109 - 2.250kg , FW-190 -  3.200kg compared to ~9.000kg for the Ju-88.


There are two more important issues that come up when discussing the German war economy.


Women in the workforce and butter over guns


1). German women stayed at home taking care of the kids instead of working in the factories
Actually the Germans used a larger percentage of women in their workforce than the US and UK. According to ‘The Wages of Destruction: The Making and Breaking of the Nazi Economy’, p358:


‘In 1939 a third of all married women in Germany were economically active and more than half of all women between the ages 15 and 60 were in work. As a result women made up more than a third of the German workforce before the war started compared to a female share of only a quarter in Britain.’
And in page 515: ‘When the chief statistician of the Reich Labour Ministry investigated the issue in the autumn of 1943, using data that were very unfavorable to Germany, he arrived at the conclusion that the share of women in war work was 25.4 per cent in the United States, 33.1 per cent in Britain and 34 per cent in Germany.’


2). The Germans continued to produce lots of civilian goods throughout the war because Hitler did not want to disadvantage the population
According to ‘Germany: guns, butter and economic miracles’ (chapter 4 of ‘The Economics of World War II’) ‘by late 1940 most of the consumer branches were already devoting between 40 and 50 percent of their output to the military, leaving very little for the civilian population’.


Civilian consumption was contained even by the mid 1930’s by cutting the steel allocation. According to ‘The Wages of Destruction: The Making and Breaking of the Nazi Economy’, p254:  ‘Measured in terms of steel, the quantity of materials available for non-Wehrmacht purposes was cut by 25 per cent between March and July 1938, from a  high point of 1.345 million tons to 1.041 million tons.’
The calorific content of food rations also fell after 1940-1. Although the regime tried to protect the civilian population there was never a policy of ‘butter over guns’.


The performance of the German war economy has always fascinated historians. However in order to evaluate the performance of the economy one needs to understand the major factors that limited production.
It was not wastage and bureaucratization but rather the lack of vital resources that affected production. The best way to describe the German war economy is scarcity management. The Germans responded to resource limitations by investing in new technologies (hydrogenation plants etc), in infrastructure and by shifting resources to important projects. They also substituted German workers (that were drafted by the armed forces) with forced and slave labour.


The belief that the German economy could have produced more armaments if it hadn’t been mismanaged is not supported by the evidence.


For those of you that are still doubtful read: ‘The Wages of Destruction: The Making and Breaking of the Nazi Economy’, ‘Demystifying the German “armament miracle” during World War II. New insights from the annual audits of German aircraft producers’, ‘The Economics of World War II: Six Great Powers in International Comparison
– Chapter 4’, Economic History Review: ’Fixed-price contracts, learning, and outsourcing: explaining the continuous growth of output and labour productivity in the German aircraft industry during the Second World War,  ‘Industrial Investment in Nazi Germany: The Forgotten Wartime Boom’, Economic History Review: ‘‘Armament in depth’ or ‘armament in breadth’? German investment pattern and rearmament during the Nazi period’
Also have a look here.