In this post I had a look at the possible compromise of Soviet Kod26 during WWII.


Recently I stumbled on to more information:


One early, and perhaps disturbing, result of this was the news from SIM officers in October that their cryptographic section had previously broken the 'diplomatic cyphers' of United States military attaches, the 'Russian confidential cypher', and those of Turkey , Yugoslavia, Greece, Portugal, Egypt, Brazil and Belgium. The results had been 'passed to Germans and Hungarians' who could 'now presumably decypher all above cyphers'.


SIM was the Italian Army’s Intelligence Agency – Servizio Informazioni Militari .Was the ‘’Russian Confidential Cypher’’ the Soviet diplomatic Code? How could the Italians have solved it ? They were not known for their cryptanalytic capabilities. Did they take photos of the code book and tables like in the case of the American ‘’Black’’ code ?
It just so happens I have that report from HW 40/132 ‘Decrypts relating to enemy exploitation of US State Department cyphers, with related correspondence’. 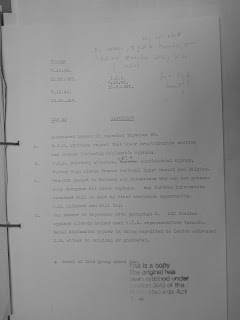 Notice that the officer who received it has marked the ‘Russian’ and requested a re-check. Perhaps  it was a mistake. Then again there are other clues.
From ‘’Deadly Illusions’’ by Costello and Tsarev , p399-400  :


Among other important items of intelligence in SENIOR'S report relayed by KENT was the possibility that the Germans would resort to unconventional forms of warfare. It also gave the precise whereabouts of the Fuehrer's headquarters on the Eastern Front and significant information about important leaks in Allied communications:


.... The Germans possess the USSR's diplomatic cypher, which was captured in Petsamo, however, the cypher has reportedly not yet yielded to the extent that there is an opportunity to decypher any large volume of Soviet documents....


This was one of the  messages  sent in November 1941 by the ‘’Senior’’ network of the Rote Kapelle , operating in Berlin.


So what can we conclude from this information ?


The Germans had captured diplomatic code 26 in the  Petsamo consulate in summer 1941 , however in order to decode messages they would need to strip the additive pads .These were only used once so the system was unbreakable.


is it possible that by having the codebook and receiving photos of the additive book from the Italians the Germans managed to decode Soviet diplomatic traffic ?