The American reaction and the Carlson-Goldsberry report

According to the NSA study History of Venona (Ft. George G. Meade: Center for Cryptologic History, 1995), it was at that time that the Finns revealed to the US authorities that they had solved their diplomatic codes. On 29 September 1944 colonel Hallamaa met with L. Randolph Higgs of the US embassy in Stockholm and told him about their success.

In response two cryptanalysts were sent from the US to evaluate the compromise of US codes in more detail. They were Paavo Carlson of the Army’s Signal Security Agency and Paul E. Goldsberry of the State Department’s cipher unit. Their report dated 23 November 1944 had details on the solution of US systems.

Unfortunately locating this report proved to be quite a problem. Initially I searched for it in the US National Archives (both in the NSA and OSS collections) but without success.

Thankfully the NSA FOIA/MDR office has managed to locate this file and they have finally declassified it. 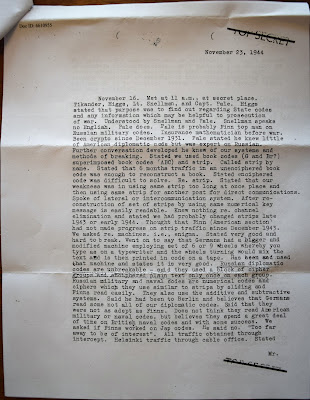 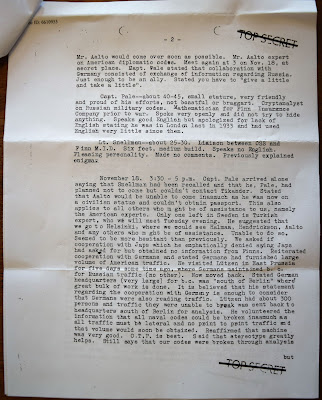 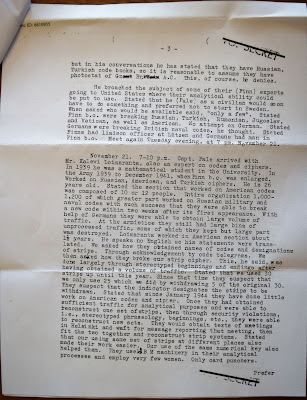 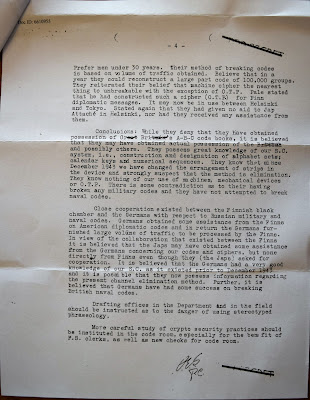 The 4-page report summarizes the information gathered by US officials from their interviews of Finnish codebreakers in 16, 18 and 21 November 1944.

From the Finnish side Erkki Pale (head of the department working on Soviet ciphers) and Kalevi Loimaranta (member of the department dealing with foreign diplomatic codes) gave a summary of their work on various cryptosystems.

The Finns admitted to solving US diplomatic systems, both codebooks and the strip cipher M-138-A. According to them an unenciphered codebook could be reconstructed in 6 months but an enciphered one was harder to solve.

Regarding the M-138-A cipher it was solved because the alphabet strips were used for long periods of time, the same strips were used by several users and the numerical keys were the same for all users. Stereotypical beginnings and endings were also exploited in assumed plaintext cryptanalytic attacks.

There was cooperation with the German codebreakers on US systems and the Finns received a lot of intercepts from them.

The Finnish codebreakers also used a number of IBM machines for statistical work. 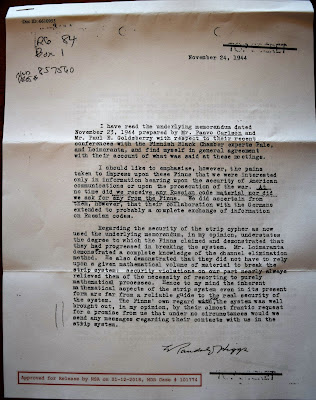 Acknowledgments: I have to thank my friends in the US for requesting this file from the NSA FOIA/MDR office and getting it declassified.