New reports released by the NSA

Even though most TICOM reports have been released by the NSA and GCHQ, some are still classified. It seems that (finally…) this is beginning to change since I just received TICOM I-89 ‘Report by Prof Dr. H Rohrbach of Pers Z S on American strip cipher’.


This was a report prepared in August 1945 by the mathematician dr Hans Rohrbach. During WWII Rohrbach was one of the top cryptanalysts of the German Foreign Ministry’s decryption department Pers Z. His major success was the solution of the M-138-A strip cipher system used by the US State Department for its most important messages.
The report details the mathematical method of solution and the use of a special device, called the ‘Automaton‘, that could quickly decode the messages once the alphabet strips and keylists had been reconstructed. 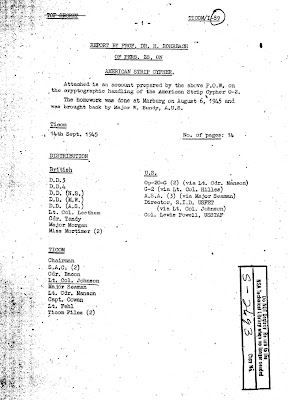 When i requested this report in 2013 the NSA’s response was: ’We have completed our search for records responsive to your request. We located item 1 of your request. That document was reviewed in 2006 and was witheld in full. The document requires a new review to determine whether any of it can be released at this time.‘
Based on this response i was expecting that I-89 would contain fascinating details about the work of the German codebreakers. Unfortunately after going through the report it’s clear that it is the same report submitted by Rohrbach to the FIAT Review of German Science in 1948 and also published in the journal Cryptologia in 1979.


My other request to the NSA was for page 92 of the Special Research History SRH-366 'History of Army Strip Cipher devices'. Some of you may have noticed that it is missing a page. In any case here it is: 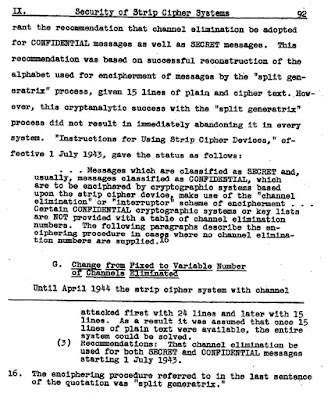 Again it doesn’t seem to contain groundbreaking information. What can I say, you win some you lose some….