The mystery of the Forschungsamt

The Air Ministry’s Research Department - Reichsluftfahrtministerium Forschungsamt was one of the major intelligence organizations of Nazi Germany. During the period 1933-45 the Forschungsamt monitored telegrams, mail and telephone traffic in Germany and also intercepted and decoded foreign radio traffic.


The Forschungsamt was created by Hermann Goering as his personal intelligence agency in 1933 and it originally included many former members of OKW/Chi, the codebreaking department of the Wehrmacht High Command.
In the 1930’s they were able to eavesdrop on the telephone conversations of Czech president Benes with his ambassador in London Masaryk, decode French diplomatic codes and might even have solved Prime Minister Chamberlain’s messages.


During the war they solved the codes of several countries and their greatest success was achieved against internal Soviet economic traffic. Unfortunately we do not know many details about their wartime work.
‘European Axis signals intelligence vol 1 - Synopsis’, p21-2 says that no evidence of their cryptanalytic successes was found and that less than 1% of the FA’s personnel were interrogated:


‘No documentary evidence bearing on its cryptanalytic successes was found by TICOM’…………..‘Goering's "Research" Bureau had over 2,000 personnel. Less than one per cent of these were apprehended by TICOM for interrogation’.
Is this information accurate? By looking at other reports it doesn’t seem to be. Even though the FA organization was dissolved at the end of WWII the most important personalities seem to have been caught fairly quickly. 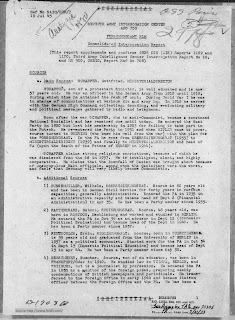 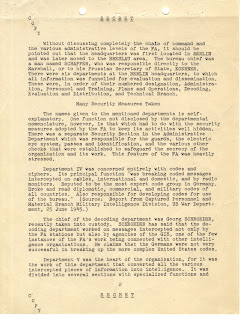 From TICOM reports I-25 and I-54 it is clear that other important individuals were also captured in 1945, namely  Oden (head of Department 15 – Procurement and maintenance of technical equipment), Seifert (head of Main Department V – Evaluation of intercepted material), Paetzel (head of department 6 - Cipher Research), Fingerhut (member of Department V), Klautschke (liaison officer to OKW).
So in 1945 the Anglo-Americans had managed to arrest and interrogate several of the FA higher-ups. This should have given them major insights into the work and successes of the FA. Yet the relevant study ‘European Axis signals intelligence vol 7 – Goering’s Research Bureau’ released in 1946 is poorly written and filled with generalities.


How can this be explained logically? It is a bit of a mystery. Perhaps some of the important reports written by the FA higher-ups were not passed on to TICOM (Target Intelligence Committee) authorities. It could be a case of bureaucratic infighting/mismanagement.
Alternatively the FA could have had some successes that we don’t know about. Was it in the interests of the US and UK to keep these a secret?


We know that much later in 1950-51 several reports were written by Kroeger (one of the top cryptanalysts), Kurzbach (head of Department 11 - Foreign policy evaluation) and Hupperstsberg (head of Department 14 – Development of technical equipment used in monitoring) under the titles DF-240, DF-241. I’ve asked the NSA for the release of these documents but it seems this will take a long time…